Jim Jarmusch Talks About His New Movie, Paterson, and the Exuberance of Great Poetry

Jim Jarmusch, on May 16, 2016 in Cannes, France.
Venturelli/Getty Images
By Stephanie Zacharek

In Jim Jarmusch’s thirteenth feature, Paterson, Adam Driver plays a bus driver named Paterson who also happens to live and work in Paterson N.J. And like an earlier Paterson resident, physician-poet William Carlos Williams, he writes poetry in his spare time. During coffee and lunch breaks, and in the moments before he begins his route, Paterson writes poems inspired by everyday things. For example, a box of Ohio Blue Tip matches sparks a meditation on the pure, quiet love he feels for his wife, Laura (Golshifteh Farahani), a charming, stay-at-home DIY dynamo.

Jarmusch, too, loves poetry. He’s a fan, in particular, of Frank O’Hara and John Ashbery, members of what’s commonly known as the New York School of poets. (The poems in Paterson, in fact, were written by New York School poet Ron Padgett.) Jarmusch has drawn on that love, and more, to make a picture that shows how art—maybe even especially art made in the margins—can fill up everyday life. Here, Jarmusch explains how Paterson came to be, describes his admiration for the work actors do, and offers a mini reading list for anyone out there who may be a poetry lover, but just doesn’t know it yet.

TIME: I understand that you came up with the basic treatment for Paterson a long time ago. Did you set out to make a film specifically about poets and poetry?

Jim Jarmusch: I went on a day trip to Paterson 20, 25 years ago. I was drawn there by William Carlos Williams, a doctor and a poet whose work I liked. I went to the falls there, and I walked around and saw the industrial parts of it. It’s a fascinating place: It was like Alexander Hamilton’s vision of a new industrial city, based around the power from the waterfall, kind of an intended utopian city. And it’s incredibly varied in terms of its demographics, the variety of people there.

[William Carlos Williams’] book Paterson, by the way, is not one of my favorite poems—in fact, it goes over my head, I don’t understand a lot of it. But at the beginning of it, a man is a metaphor for the city of Paterson, and vice-versa. And I thought that’s just a beautiful idea. I thought I’d like to write a little treatment about a poet, a working-class guy in Paterson who’s actually a very good poet but not a known one. So I had that little one-page treatment in a drawer for years. I kept remembering it, but I never really got to it until now.

TIME: You make Paterson, the city, look so beautiful in the film—like a place that may have fallen on hard times but still looks really vibrant.

Our Paterson is admittedly an imaginary Paterson. Paterson is a very rough place, it’s a difficult place. There are a lot of working people there, and a lot of poor people there. It’s also incredibly mixed, ethnically.

The movie was never intended to be a social document, but I also wanted to weave [parts of the city] into the movie, and shoot some of it there, of course. I would go to look at locations with our production designer, Mark Friedberg, whom I’ve worked with before, and whom I really admire. And Mark would say, “Look!” And every time we’d stop and look at something, we’d see hope and despair in the same image. We would see a couple arguing, something not so positive, and next door there’d be someone bringing flowers. Or you’d see a building collapsing, and right next door, a guy painting his new door bright green. Mark kept taking pictures of these juxtapositions. So we wanted to have a little of that, to mix those things in, not in a really heavy-handed way, but just to let them exist. We didn’t want to just romanticize the decay, or to make it look like an Edward Hopper kind of thing.

TIME: You certainly get that sense watching Paterson drive his bus through the city. He goes by Footlocker stores and cheap chain stores, places generally used in films to show that a place isn’t just economically depressed, it’s depressing, period. I didn’t get that feeling from this film.

Downtown Paterson is very vibrant in that way. There are Footlockers, and there’s a Mexican place, and an Arabic clothing store, and a Chinese takeout place. There’s always all kinds of different people moving through. I love that. And the point of view from a bus is very beautiful, because you’re above the people walking by. You don’t really pay attention to people on a bus when you’re on the street, right? But on a bus, you’re not at car level. I just loved riding for a week, shooting on the bus—just the point of view of looking slightly down on the sidewalks, and all those little shops and things. It’s almost theatrical, in a beautiful way.

TIME: And how did you find your way to Adam Driver, who’s so terrific in the film?

I hadn’t seen Adam in too many things. I saw him in an episode of Girls. I’m not a big TV guy. I saw him do a lovely little thing in Inside Llewyn Davis. He was in Frances Ha. I just loved his face, and his kind of quietness. And then I heard some interviews with him. I just wanted to meet the guy.

Working with him was great because he’s so reactive. He doesn’t push anything as an actor. Adam doesn’t see films that he’s in. He doesn’t like seeing himself because he doesn’t want to break that thing where he just wants to be there and react as the character. He doesn’t want to think about, “How did I move, how did I look, how did it come across?” For him, that’s not helpful. There are other actors who are like that—Robert Mitchum would never see anything he was in. Some actors, it’s just not good for them.

Other actors love it and they learn from it. But Adam, no. He wants it to be believable. He wants to react, he doesn’t want to act. I love that.

TIME: In general, you seem to know how to bring out the best in your actors. How do you make it work, over and over again?

They’re all totally different, and I love that. It’s a very complicated thing to be an imaginary person on command. And what tools are you you’re using? Your own life experience and emotions. That’s tricky. So if actors get upset, or they act childlike, or childish, or anything, I am totally sympathetic with them. Look what they have to do, you know? Film actors especially. They’re waiting for a project. They’re waiting, and then they get one, and it’s like, “Go, go, go! Hey, come on, we’re rolling, come on, be the guy!”

Then the editor and the director or whomever can take any part that they want. Actors don’t have any control. They give something, and then they give it over. I sympathize with them. It’s a hard job to have.

TIME: Paterson weighs the virtues of writing, or of making art, just for yourself versus putting it out in the world. Everyone is so busy pushing themselves out there on social media. What does it mean to make something that’s just for yourself, as Paterson does?

I think you can only trust yourself or those you’re collaborating with. And as soon as you step outside of that and start imagining, “How will the world receive this?” you’ve lost your strength. You only have your own intuition. I’ve always said, from the first films I ever made, that those of us making the film, we were making it for ourselves. When I was very young I was on a TV show in Holland with Bernardo Bertolucci, whom I deeply admire, a fantastic contributor to the history and the beauty of cinema. But he got mad at me. He said, “You say you make films for yourself. I think that’s reprehensible. Then you are an elitist, and you are not thinking about the world, the world that you’re supposed to be making the film for.” I was kind of upset, because this was someone I really respected. But I held my ground and said, “No I don’t agree. I’m not trying to make a statement to the world. I’m trying to express something that those of us making the film feel.”

There are all kinds of ways to make films or art or poetry. And one reason I’m attracted to the New York School of poets is this idea of writing to one person. Not standing on top of the mountain, saying, “Here is what I believe!”

TIME: Like Frank O’Hara’s idea of addressing one person with a poem.

Yes, and it comes from William Carlos Williams, too, and Wallace Stevens. It’s not a megaphone that you’re shouting through. I would feel incredibly embarrassed if I thought I was trying to announce my feelings to the world.

I’m not comfortable, personally, trying to shout from the mountaintop. But I think that’s kind of obvious because my films are kind of marginal. They’re obviously trying not to hit a big marketplace. If they were, I’ve failed miserably!

TIME: A lot of people I know don’t bother to read poetry, either because they don’t feel they have the patience for it or are a little threatened by it. Could you give me a mini reading list of poets or works that you particularly love?

Oh, wow, that’s rough, there are so many. I would start with Dante. I would start with the knowledge that Dante wrote in vernacular. He was writing in street language, so he was the equivalent, almost, of hip-hop. He was in the street. So Dante is one of the most exquisite. I can’t read Italian, but even in translation, a good translation, he’s the man.

Then I would say, read Arthur Rimbaud, the teenage poet, who stopped writing at the age of 19, who wanted to use language in a way that could completely turn around your idea of what your senses receive. A really revolutionary poet, artist, whatever—what a strange child poet he was!

And then I would jump to—well, there’s Wallace Stevens who was an insurance executive. When he won some kind of award, one of his colleagues at the company where he worked responded by saying, “Wait a minute, Wally writes poetry?” No one had a clue. And he’s one of our most beautiful philosophical poets.

Then I gotta jump to the New York School, and I don’t know who to quote, whether it’s John Ashbery, Kenneth Koch or Frank O’Hara. But let’s just say, Frank O’Hara: His full-time job was curator at the Museum of Modern Art in New York, and he wrote poems on his lunch break. His poems are exuberant and funny and have a lot of exclamation points. One of his poems starts with “How funny you are today New York/ like Ginger Rogers in Swingtime.” Exclamation point! That’s, like, not shouting something from the mountaintop, but just exuberance of the details of being a human being. I carry those guys, always, in my heart. 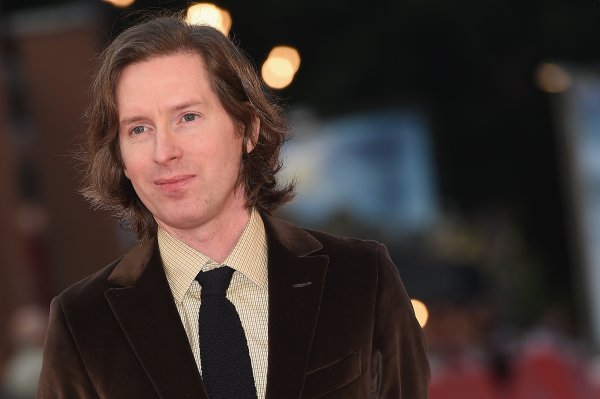 Here's How You Can Get a Role in Wes Anderson's Next Movie
Next Up: Editor's Pick