The Only Antidote to the Poison of Fake News

Mark Zuckerberg is wrong. Fake news isn’t a small problem for his company that will disappear eventually with just a few more lines of code. It’s an existential threat to Facebook’s reputation.

The moves that he is proposing won’t even remotely solve the equation. Tweaking news feed algorithms and adding a few fact-checkers to cull fake news won’t work. People still won’t be able to tell whether legitimate news is in their news feed or not. Facebook needs to embrace journalism as a full partner. It is the real news expert. Facebook has dishonored this obvious truth for years.

Whether Zuckerberg admits it or not, his platform was more than just a little bit responsible for the outcome of the 2016 presidential election. Propaganda is powerful because it works. Only science, evidence and hard facts—which form the basis of real news—will truly counter the propaganda monster that’s threatening the fabric of American democracy right now.

Journalism understands this principle. Technology content platforms—even big ones with hundreds of millions of users—clearly do not. Every experienced journalist who has developed an expertise in a given subject can spot fake news in a nanosecond when it flickers across his or her screen. Journalists don’t tolerate fake news. But Facebook does.

There is one obvious solution to the problem that Facebook is now wrestling with: to genuinely welcome legacy media onto its platform and allow it to prosper and slay the fake news beast. But that would require an extraordinary sea change within Facebook. It is a paradigm shift that Zuckerberg has never been willing to embrace. Legacy media is allowed on his platform—they just can’t make nearly as much money derived from its news content as Facebook itself does

Facebook was rightfully criticized for widespread sharing of untruthful content during the 2016 presidential election. It’s struggled with human review of its news feed and algorithms. The changes it’s proposing—tweaking its news feed and relying on fact-checking to thwart fake news—won’t allay the criticism that it will continue to make a huge amount of money from false news.

While this is a clear and present threat to Facebook’s reputation, it is also an unprecedented opportunity for someone. The first big content platform to establish a real solution to this threat will not only contribute to a better-engaged democracy, it will create a large market opportunity for new advertising revenue from engaging, accurate information.

Make no mistake about it. There is a great deal of advertising revenue being made from fake news right now—nearly all of it going to Facebook and Google (who, collectively, pull in 85% of all new digital ad revenue now). Given that the top fake election news stories generated more total engagement on Facebook than top election stories from 19 major news outlets combined, according to a Buzzfeed analysis, it’s likely that Facebook made more money from fake election news than real news.

However, Harvard business professor Ben Edelman told Forbes that it’s likely that ad revenue from real news would essentially replace the revenue Facebook would lose by removing fake news across the platform. “If Facebook managed to take out all the fake news, maybe they’d show more real news, get nearly as many hours of user activity, and still show just as many ads and get as many ad clicks,”Edelman said. Both Facebook and Google have at least taken their first steps in that direction by vowing to block ad revenue from blatantly false news sites on their platforms.

The simple truth is this: the only antidote to fake news poison is real news.

The proliferation of bogus news sites, which were a new reality in the 2016 presidential race, will become part of the political landscape going forward. That means platforms will continue to face risks to their brand and image over their role in promoting the contents of these sites through user sharing—because it clearly harms our democratic political process.

But there is a solution, one that has the potential to generate more revenue, over time, than any platform can ever make through the promotion of content from fake news sites. It has two simple elements: partner with legacy media to curate real news and reward them for it, and then turn it into engaging video content that travels well in the digital age and attracts premium advertisers.

Almost all legacy print journalism brands have now consolidated to the point that they define themselves in unique topic areas that are capable of attracting large readerships in their niche. No one truly focuses broadly on general readership any longer. But, without a broad and general platform that can attract the entire range of advertisers, their business models aren’t sustainable.

Once upon a time, legacy print brands could attract premium advertising on a consistent basis. Those days are long gone. Print ad rates began declining 5% a year starting a decade ago, and the legacy brands began to plan for the steady-state decline. That collapsed in 2016, with print ad rates now declining by 15% or more. Circulation is suffering as well. Newspaper print circulation dropped 7% from 2014 to 2015 alone.

There is no business model that works for legacy media brands. Subscription plans don’t cover their costs. Neither does the digital advertising inside their websites, no matter how successfully readers click back to their sites and no matter how broad their base of digital readers.

A true partnership between legacy media and a big content platform that covers the entire range of topics and real news that consumers expect will attract large, global advertisers and reward real news. But its credibility—and its ability to slay the fake news beast—rests on the deeply reported, expert journalism of legacy media organizations.

The Fox News Channel is now worth as much as $12 billion on the strength of just several hundred thousand daily viewers, in a rapidly shrinking cable market of 100 million or so. Competitors like CNN and other broadcast news digital sites likewise have billion-dollar valuations on the strength of relatively small viewerships. A real news channel on a big content platform that combines world-class print journalism with broadcast-quality news would overtake each of them almost overnight.

Fake news is a real threat to Facebook and every other big content platform that allows political actors to dress propaganda up as news. It is a virulent poison that now presents an existential threat to democracy. The antidote is real news—curated by legacy media journalism, delivered by big platforms in a true partnership.

There’s still time for Mark Zuckerberg to get it right. 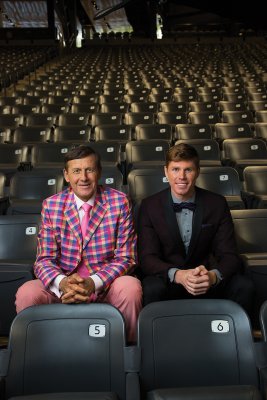 Lessons From My Father, Craig Sager
Next Up: Editor's Pick