Conway said Trump is looking to find jobs for Ivanka Trump and her husband Jared Kushner in his Administration — potentially in the West Wing. Both have sat in on Trump’s meetings with world leaders and business executives, and have been involved in selecting Trump’s Cabinet members. Kushner has been referred to internally as the “third chief of staff” along with incoming White House chief of staff Reince Priebus and senior adviser Steve Bannon. “I think that we would benefit tremendously by having them inside the Administration if in fact that can happen,” she told reporters.

The main obstacle is 5 U.S. Code § 3110, which prohibits government officials — explicitly including the President — from appointing or employing family members, and prohibits those family members from being paid if they are in fact hired.

Conway suggested that Trump’s lawyers may have discovered a way out. “The anti-nepotism law apparently has an exception if you want to work in the West Wing because the President is able to appoint his own staff,” Conway said on MSNBC’s Morning Joe. “Of course, this came about to stop maybe family members from serving on the Cabinet, but the President does have discretion to choose a staff of his liking.”

The loophole would appear to rely on a federal court’s ruling in 1993 regarding then First Lady Hillary Clinton’s appointment to a White House task force on health care reform. “We doubt that Congress intended to include the White House or the Executive Office of the President,” D.C. Circuit Judge Laurence Silberman wrote of the anti-nepotism law. The opinion went on to suggest that while a President could not appoint his brother to be Attorney General, he could perhaps make an appointment to the White House staff, and potentially as an unpaid aide.

But that is not the opinion of several Republican and Democratic ethics lawyers consulted by TIME, a likely dispute that would be settled by the courts. Richard Painter, President George W. Bush’s White House counsel and a critic of the Trump Administration’s middling efforts to prevent conflicts of interest, pointed to an Office of Legal Counsel memorandum advising President Jimmy Carter that he could not employ his own son as an intern. Painter and others believe that the intent of the statute to include the Executive Office of the President is clear.

But this interpretation of law is not the only way Trump could try to bring his family into the White House to advise him. Trump has several other options available to him:

Unpaid help: The law doesn’t prescribe a penalty for hiring a family member. It just says that the family member can’t take a salary from the government. Trump could have his family members in unpaid roles in the White House, though it is not clear whether these people would have the same access to office space and security clearances as other paid employees.

Change or challenge the law: Trump could challenge the law in court on the ground that it interferes with his executive powers under the U.S. Constitution to appoint his staffers. He could also ask the Republican-controlled Congress to simply amend the law.

Outside consultants: Both Republican and Democratic Presidents have a long history of hiring pollsters, political advisers and other consultants with campaign or political party money, and then meeting with them regularly inside the White House. Family members could hold informal roles and be paid by outside groups or Trump personally. 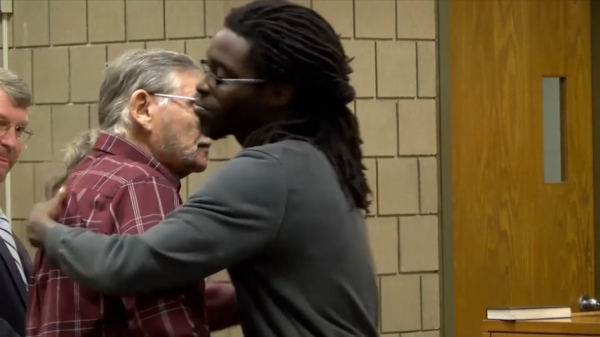 Watch a Donald Trump Supporter and the Protester He Punched Hug It Out
Next Up: Editor's Pick