Swearing Is Scientifically Proven to Help You *%$!ing Deal

It has been a long damn year. But you know what studies show may help ease your pain? Swearing.

In this era of endless squabbling over what is or is not offensive, a corner of academia has been pursuing the language that we pretty much all agree is not polite — studying the syntax of sentences like “F-ck you” on the same college campuses where students are being safeguarded by trigger warnings.

Let some social scientists tell it and the way profanity affects us reveals elements of our nature as evolutionary beings, I sh-t you not. “If you don’t study this kind of language,” says psychologist Timothy Jay, “you’re missing an important part of being a human.”

If you’re offended by some of the words you’ve read so far, it’s par for the coarse. Your sensibilities give these strings of letters their potency. “We’re told that these are words, early on, that you can’t say. We punish people for saying them,” says cognitive scientist Benjamin Bergen, who explores profanity-related research in his new book What the F. “So we’re training kids, socially, that these words are powerful.”

During his career at the Massachusetts College of Liberal Arts, Jay has recorded and analyzed thousands of people swearing, and he’s come up with two core reasons for why we do it. For one, it allows us to express our emotions, to vent, to release. “It also communicates very effectively, almost immediately, our feelings,” Jay says. “And other words don’t do that.”

The utterance of a single f-word can convey the state of a person—whether they are angry, upset, excited, surprised or aroused—and the intensity of that state. Because we learn early on that profanity is to strong feelings what blaring horns are to a tornado, the body becomes conditioned to physically respond to it. “Your pores open and you start sweating. Your heart rate increases. Your pupils dilate,” says Bergen, who teaches classes about profanity at the University of California, San Diego. “You experience this fight or flight reaction.” Research has found that reading and writing profane words has an emotional effect on people, he says, but not nearly as much as saying and hearing them does.

Like any powerful tool, these words can be used “for constructive or destructive purposes,” Bergen says. They are generally inspired by taboo-ridden domains: sex (“f-ck”), bodily functions (“sh-t”), religion (“hell”) and words describing other groups people (the n-word). The words in the final category tend toward the destructive because “they really are built to offend, to cause harm, to divide and to denigrate,” Bergen says. In studies, Americans rate those group-based swear words as the most offensive.

Of course, what is considered indecent language evolves as our cultures do, reflecting us back to ourselves through the taboos of the time. While most all languages have profanity, the offensive words differ from country to country. Take historically Catholic Quebec, where uttering a religious word like calisse (“chalice”) in vain might well furrow brows.

But they can be useful, too. When researchers observed how people dealt with the pain of submerging their hands in icy water, they found that people could withstand more discomfort if they repeated a swear word, rather than a non-swear word. Scientists have also found that unlike most sounds we utter, cussing can happen in both voluntary and involuntary ways. The latter—like when we drop our keys in the snow and yell “F-ck” without consciously deciding to—offer evidence that language isn’t just produced one way in the brain. That has clinical and research implications, says Bergen, and it may tell us something about why we came to communicate as we do.

It also suggests that these emotionally charged words can become so deeply ingrained in us that uttering them toes the line of being a physical act rather than a symbolic one, more like a sneeze than a sentence. “When you say them,” Jay says, “you feel something.”

Those strong feelings drive some people to try to stamp profanity out. After cable news networks played the infamous video of Donald Trump saying he grabs women “by the pussy,” about two dozen people filed indecency complaints with the Federal Communication Commission—which regulates the use of profanity on public airwaves—according to records obtained by Morning Consult. “Some consumers are easily offended,” a lawyer interviewed by Morning Consult said, “while others have a high tolerance for what is being shown on television.”

Experts like Jay will tell you that many of the reasons people often oppose profanity are based on “myths,” and academics have worked to debunk them. Bergen dedicates a whole chapter in his book to taking down a (flawed) study that suggested profanity harms children. Jay, meanwhile, recently took on the notion that people only swear because they’re not intelligent enough to express themselves another way. What he found is that people with larger vocabularies can actually generate more swear words than people with smaller ones.

Jay has also found that the soap-in-the-mouth doesn’t work. In fact, there’s reason to believe that the more kids are sheltered from these words, the more impressive they become. In a follow up to the ice water study, for instance, the same researchers found that the pain-easing effect of uttering swear words was more acute among people who swore less. Use it all the time and you habituate; the words lose their oomph.

After teaching his class on profanity for the last several years, Bergen says he’s become comfortable writing and saying most of those words that make us blush. He will discuss at length the fact that “F-ck you” seems to disprove one of the fundamental rules we learn in school: that a grammatical sentence needs to have subject (you is the object of f-ck but it remains unclear who is performing the action someone wishes you to receive). And he can do it with all the emotion that a chemistry professor might use the word neuron is his own class.

Though Bergen says he provides students several trigger warnings, letting them know what kind of material is coming before the first day of class, he also says he’s never had a complaint. “The goal is for them to learn as much as they would in any cognitive science class or linguistics class,” he says, “but maybe be a little more interested along the way.” 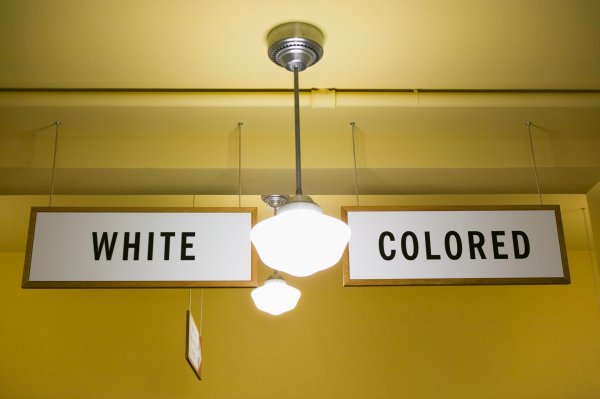 The Difference Between Racial Bias and White Supremacy
Next Up: Editor's Pick