America’s Next Top Model returned on VH1 Monday night with a new batch of contestants – none of whom is larger than a traditional sample size. The disappointing choice to exclude plus-size models from the season entirely is made even more confusing by the fact that one of the judges is arguably the most high-profile plus-size model working in America today.

The reality show, now remarkably in its 23rd season, has a long history of featuring guest judges who are prominent figures in the fashion world – models, photographers, editors, etc. This season, ANTM tapped Ashley Graham: supermodel of the moment, body-positive advocate and the first plus-size woman to land the cover of Sports Illustrated. If that felt like a win for fans of the show who have long been troubled by its perpetuation of the idea that one body type is better than all the others, that feeling wore off once they realized there were exactly zero pluz-size models actually competing in the show.

The lack of body diversity prompted a wave of frustration across social media. Tess Holliday – who at 5’5” and a size 22 became the first model of that body shape contracted by a major modeling agency when she signed with MiLK Management in 2015 – tweeted her skepticism that ANTM simply couldn’t find any promising plus-size contestants.

Aspiring plus-size models have never seen nearly the same level of representation on ANTM as their straight-size counterparts, but some seasons (cycles, in ANTM-speak) have featured least one or two. Since it’s rare for those women to make it even moderately far into the competition, you’ll have to decide for yourself whether their inclusion is tokenism or a genuine effort at diversity that simply leaves something to be desired in its execution. The only plus-size contestant to ever win ANTM was Whitney Thompson in Cycle 10.

Other prominent figures who took to twitter in the wake of the big reveal included Orange Is The New Black actor Danielle Brooks, who pointed out that by excluding plus-size women, ANTM is denying representation to more than two-thirds of the nation’s female population.

For her part, Holliday made it clear that Graham, who as of this writing has not commented on the decision, should not be held accountable – it’s the producers of the show who have to do better. 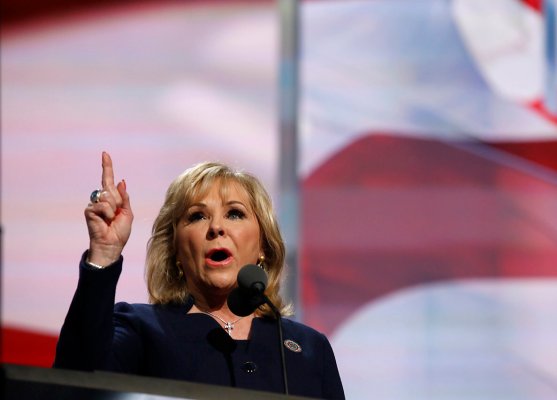 Oklahoma Will Require Anti-Abortion Signs in Public Restrooms
Next Up: Editor's Pick