What to Know About This Year's Overlapping Christmas and Hanukkah Holidays

A giant, gas-lit menorah stands in front of a Christmas tree shortly after members of the local Jewish community lit the menorah on the night before the first day of Hannukah on Dec. 4, 2007 in Berlin, Germany.
Sean Gallup—Getty Images
By Olivia B. Waxman

Bundle up: Wednesday marks the winter solstice, the first day of winter and the day with the fewest hours of sunlight for the whole year. And in a few days, two holidays celebrating light will take place during the darkest time of year, when Hanukkah begins on Christmas Eve.

The last time that this exact Christmas-Hanukkah overlap happened was in 1978, and next time it will happen will be in 2027. The occurrence now happens roughly on average every 30 years, according to Sacha Stern, a professor of Rabbinic Judaism at University College London who is an expert on the Jewish calendar.

Stern points out that while they occur on the same dates of their respective calendars’ months—the festival of Hanukkah occurs on the 25th of the Jewish month of Kislev, while Christians celebrate Christmas on the 25th of December—that is coincidental. Both of these holidays were instituted under Greco-Roman rule, but 200 years apart from one another. In the Roman Empire, during roughly the first four or five centuries of the Christian era, Roman sources also associated December 25 with the date of the winter solstice, “which is why it is often claimed that Christmas was consciously grafted onto the feast of the Roman sun god,” says Philipp Nothaft, a fellow at All Souls College at the University of Oxford who is an expert on calendars. “Popular as this explanation may be, it receives little to no support from the extant sources.”

The reason why Hanukkah overlaps with Christmas only some of the time has to do with the difference between the Jewish calendar, which is lunar, and the Gregorian calendar used by most people in the West. Neither calendar matches up exactly with the amount of time it takes the Earth to move around the Sun, but the Gregorian calendar is close enough that the difference can be fixed with an occasional leap day. The 12-month lunar calendar, on the other hand, is about 11 days shorter, so a day is not enough to prevent the calendar from becoming unmoored from the seasons. Instead, the lunar year requires a leap month. Calendar buffs may call this process “intercalation” and the extra 13th month an “intercalary” month.

In 2016, that extra month was inserted into the Hebrew calendar — it started in late February — and as a result the holiday of Hanukkah appears later on the Gregorian calendar than it would otherwise. But Nothaft explains that the reason the holiday moves is even more complicated than that: even with intercalation, the Jewish year and the Gregorian year aren’t exactly the same average length. The difference between the two cycles—about six minutes—means that the Gregorian date of Jewish holidays like Hanukkah will slowly migrate.

Hanukkah, which observers may be used to seeing fall in November or December, will eventually be associated with December and January instead. In other words, Nothaft says, the overlap between Christmas and Hanukkah will become more common.

There’s even a rabbinic tale that can be used to explain why festivals like Hanukkah and Christmas occur at this time of year. In it, Adam notices the days becoming shorter and shorter and gets worried that light will disappear all together. “But then, on the 25th of the Hebrew month that Hanukkah comes out of, he realizes it’s just because of the winter solstice,” says Elisheva Carlebach, a professor of History at Columbia University. “He was so grateful when he saw that the days would grow longer again that, on that turning point, he celebrated. I think [the story] is a way of explaining why both Jews and Christians have a festival of lights in the darkest season. It’s a kind of oblique acknowledgement that there is some common impulse for people to face with darkness with light.” 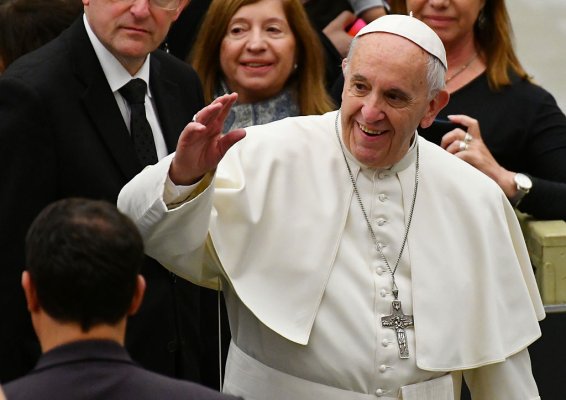 Pope Francis Warns Against Scandal-Mongering
Next Up: Editor's Pick