The sign and front entrance of Comet Ping Pong pizzeria are seen Dec. 5, 2016 in Washington, D.C. A man was arrested Sunday after walking into the pizzeria and discharging a rifle, claiming he was "self-investigating" an online conspiracy theory about a pedophilia ring being run by high-ranking Democrats, including Hillary Clinton.
Alex Wong/Getty Images
By Katie Reilly

History professors who teach courses on conspiracy theories were dealt both a challenge and a gift this year, as their area of study was thrust into contemporary politics by the presidential campaign and election of Donald Trump.

“This year was almost like, ‘Here’s a gift,’ in terms of all the stuff that we could talk about, certainly from the Trump camp,” said Derek Arnold, a Villanova professor who taught a summer course on the rhetoric of conspiracy theories.

“They got to see how it actually begins to affect people,” he said. “And we saw how it affected his campaign, especially at the end.”

Trump gave voice to conspiracy theories throughout his unconventional campaign, frequently claiming that the election would be rigged against him. He was long one of the most vocal proponents of the debunked “birther” conspiracy theory that President Barack Obama was not born in the U.S. He suggested that the father of Texas Sen. Ted Cruz was somehow involved in the assassination of former President John F. Kennedy. And he blamed sexual assault allegations against him on a global conspiracy of elites working to stop him from winning the presidency.

“This is a conspiracy against you, the American people, and we can’t let this happen or continue,” he said at one rally in the final weeks of the campaign.

Trump sent a similar message in his last campaign ad before Election Day, which Kathryn Olmsted—a history professor at the University of California, Davis—discussed with students in her conspiracy theory course. She said teaching the course this fall was an “entirely different experience” than when she last taught it four years ago.

“It seemed like the stakes were higher,” Olmsted said. “I was more stressed because I did not want to be perceived as partisan. On the other hand, it was clear that these political events were directly relevant to what we were talking about in the classroom.”

Prior to Election Day, she didn’t focus any lectures on the campaign, worried it might appear partisan. But during the last week of class, she covered the birther movement and other conspiracy theories that had been relevant to the election.

“I was very much aware that it was more immediate and topical and relevant to students’ lives than when I had taught it before,” she said, adding that she plans to wait a couple years before teaching the course again. “I found it really depressing this time, I guess that’s the main thing. I love to teach, I really love to teach, and it’s very exciting, but this quarter it was just a little too close for comfort.”

Sierra Shidner—a junior at the University of California, Davis—took Olmsted’s class because she had long been amused by conspiracy theories. As a teen, she said she was fascinated by Alex Jones, who runs the far-right-wing site Infowars.

After taking the class, Shidner said she now thinks about her 16-year-old brother, who spends a lot of time on the internet, and other people who might not know how to sort fact from fiction online.

“Usually when I’d hear these bonkers, alternative conspiracy theories, I’d just kind of laugh them off, but now that people are taking them so seriously, I feel like I should probably engage with them and talk to them about it,” she said. “A lot of people just take what they see on the internet as true, and we’ve already seen the repercussions of that.”

Earlier this month, a North Carolina man was arrested for firing a rifle inside a Washington, D.C. pizzeria, saying he was investigating a false conspiracy theory that Hillary Clinton and members of her campaign were involved in a pedophile ring based out of the restaurant.

In explaining how conspiracy theories originate and what makes them believable, professors hope to help students think critically about information before accepting it as legitimate and factual. Robert Goldberg, a University of Utah professor who is preparing to teach a conspiracy theory course next fall, said he predicts the class will spark more controversy than in the past.

“It’s much more acceptable to believe in conspiracy theories today than it was five or 10 years ago,” he said. “I expect to get more pushback on what a conspiracy theory is, why I believe something is wrong.”

That kind of contemporary challenge is new for professors more accustomed to lecturing about the past.

“There’s a solace in history,” Olmsted said, explaining that her courses typically cover movements and events that have already concluded.

“It’s a little more nerve-racking when you’re talking about the subject that is not only happening right now but will develop in ways that you don’t know about in the future.” 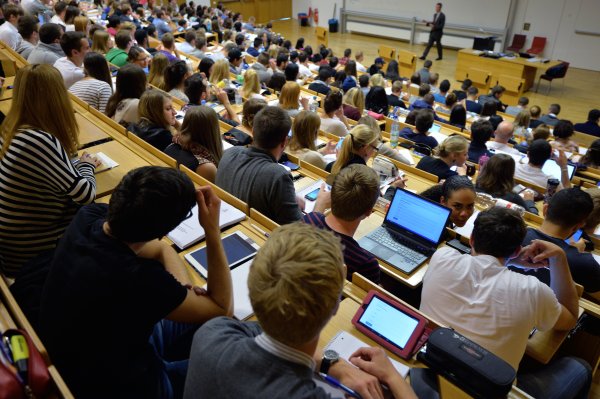 Professors Targeted by Conservative Watchlist Fire Back: 'It’s Obviously an Attempt to Silence People'
Next Up: Editor's Pick