73-Year-Old Man With Dementia May Have Been Waving Crucifix When Cops Fatally Shot Him: Family

The 73-year-old California man with dementia who was shot dead by police Monday may have been waving a wooden crucifix that was mistaken for a weapon, his family said.

Francisco Serna was in the early stages of dementia and had recently begun carrying around a crucifix that was about 6 inches long and waving it at people, according to one of his daughters, Laura Serna.

“There were moments where he thought he was going to die of old age,” his daughter told TIME on Tuesday. “He was just carrying that around. I don’t know if it was like for his security. They could have mistaken that for a weapon.”

Francisco Serna was out for a brisk walk at about 12:30 a.m. when a Bakersfield police officer opened fire while responding to a report of an armed man, authorities and the man’s relatives said.

Authorities said Serna was unarmed when he was shot and killed. Serna’s family believe he had the crucifix with him at the time; they have not found it in the house since his death.

Bakersfield police did not comment on whether a crucifix was found with Serna at the time of the shooting. Sgt. Gary Carruesco, a police department spokesman, said in a statement that officers were responding to a report of a man “brandishing a handgun.” One officer shot Serna several times in a neighbor’s driveway after a witness pointed to him and has since been placed on routine administrative leave.

Laura Serna, 47, who lives with her parents, said her father was not heavily religious but that he was sentimental. Last week, he started bringing the crucifix around with him while he was reminiscing about loved ones who have died. The wooden crucifix was among many that had been inside his house for years. “That’s just the one he chose to carry,” Laura Serna said.

The shooting left Serna’s family reeling with pain and anger at the loss of a man whom they remembered as a “hero.”

One of Francisco Serna’s sons, Rogelio Serna, told TIME that his father liked taking short walks at night to cope with his dementia and tire himself out before bed. “He took his last walk,” said Rogelio Serna, who mourned his father as a loving family man who raised his five children to live life without violence. “He was my hero. We’re still in shock and we want to get answers. We just want to get answers.”

Laura Serna said she was sleeping when she was jolted awake by the sound of gunshots. “Less than five minutes later, my mom was knocking on the bedroom door, saying ‘Something is happening. Something happened to your dad.’ I got downstairs and went outside, and my dad was laying in the driveway across the street dead and bloody,” she recalled. “There was no explanation.”

Laura Serna said her parents were watching television when her mother left the room to wash another load of laundry. When she returned, her husband was missing and the front door was cracked open. “She went outside and she called him, ‘Francisco!’ And he did not respond. But she did notice that his body was across the street,” his daughter said. “He was slumped over and bloodied.”

Francisco Serna, who had more than a dozen grandchildren and a handful of great-grandchildren, was diagnosed with dementia in July 2015 and had been taking medication for it, his children said. He was living with his wife and daughter, Laura.

Rogelio Serna, 41, said his father was a “mentor” to his children and had raised a tight-knit family. “He had time for all of us,” the younger Serna said. “We’re of course angry and upset. We just want answers. We do not tolerate violence. We were not raised that way,” he said.

“We’re going to miss him dearly,” the son added. “He was at the age where he was getting sick. He should have passed away surrounded by family, not surrounded by police and bullets.” 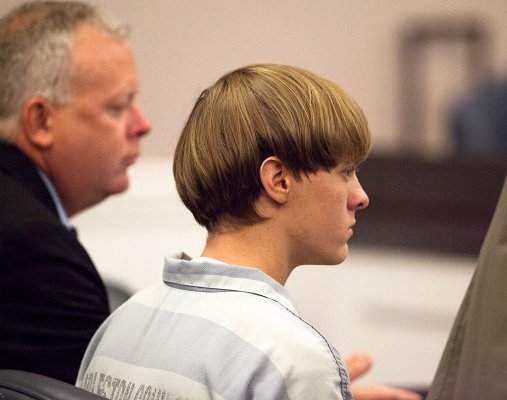 Dylann Roof Had a List of Local Black Churches in Car
Next Up: Editor's Pick