Trump announced his choice on Tuesday, describing Tillerson as one of “the most accomplished business leaders and international dealmakers in the world.”

“While Rex Tillerson is a respected businessman, I have serious concerns about his nomination,” Rubio said in a statement.

Other Republicans have praised Tillerson, but his close ties to Russia could make for a contentious Senate confirmation hearing, especially amid increasing allegations of Russian interference in the presidential election.

“The next secretary of state must be someone who views the world with moral clarity, is free of potential conflicts of interest, has a clear sense of America’s interests, and will be a forceful advocate for America’s foreign policy goals to the president, within the administration, and on the world stage,” Rubio said. “I look forward to learning more about his record and his views.‎ I will do my part to ensure he receives a full and fair but also thorough hearing before the Senate Foreign Relations Committee.”

At least one Senator, the chairman of the Senate Committee on Foreign Relations, said he approved of Trump’s decision. Tennessee Sen. Bob Corker, a Republican who was considered for the Secretary of State position, praised Trump’s choice.

“Mr. Tillerson is a very impressive individual and has an extraordinary working knowledge of the world,” Corker said in a statement. “I congratulate him on his nomination and look forward to meeting with him and chairing his confirmation hearing.” 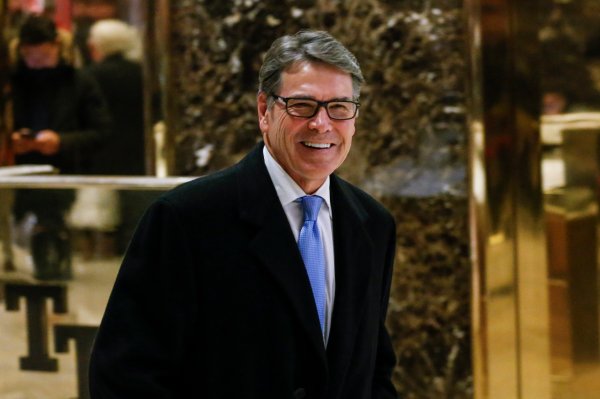 Rick Perry Infamously Forgot About the Department of Energy. Now He Might Lead It
Next Up: Editor's Pick