Russia and Syrian rebel groups said on Tuesday that a deal has been reached to evacuate fighters from a besieged pocket of the city of Aleppo, an agreement that would conclude a more than four-year battle for one of Syria’s most important cities.

If implemented, the last-minute agreement would mark a turning point in more than five years of revolt and civil war in Syria, dealing a defeat to the opposition in a central battlefield of the conflict. The arrangement could save the lives of rebel fighters who have defended a portion of the city since 2012.

The fate of civilians trapped in the besieged rebel sector remains unclear. Rebel groups say the agreement will also permit civilians to exit the city. But speaking at the United Nations on Tuesday, Russian envoy Vitaly Churkin said, “The agreement is for the fighters to leave. The civilians, they can stay, they can go to safe places, they can take advantage of the humanitarian arrangements that are on the ground,” according to Reuters.

If it does not apply to civilian activists and ordinary residents, the deal could raise concerns. According to the U.N. hundreds of men have gone missing after fleeing to government-held parts of Aleppo, triggering fears that they had been detained or forcibly disappeared by the regime.

First responders said an evacuation was intended to save the lives of the civilians in the besieged enclave. Raed al-Saleh, the head of the Syrian Civil Defense, also known as the White Helmets said on Twitter that Russian and Syrian regime violence “forced” the group to request safe exit for civilians. Better, he said, than “leaving them to the Regime.”

The announcement of an agreement followed reports of extreme violence on the ground in Aleppo. Earlier on Tuesday, the U.N. Office for the High Commissioner for Human Rights said in a statement on Tuesday that at least 82 civilians had reportedly been killed by forces supporting the regime of President Bashar Assad in four neighborhoods in the besieged section of Aleppo.

Those reports heightened fears of a grisly endgame in Aleppo, where pro-Assad forces have been sweeping into areas held by armed opposition groups in recent days, approaching a victory that eluded them for more than four years. U.N. Secretary-General Ban Ki-moon said on Monday that he was alarmed by reports of “atrocities against a large number of civilians, including women and children, in recent hours in Aleppo.”

As the regime and its allies advanced in recent days, civilians fled for their lives. Some of them have been forced to turn to government-controlled areas, others to what remains of the rebel sector, where an estimated tens of thousands of civilians remain, many of them believing that they are simply waiting for death.

“We hope one can help at least the children and women. They are in a great danger. Where is the UNICEF?,” says Abdulkafi Al-Hamdo, an activist and teacher living in the rebel-held section, in a text message to TIME. “This regime doesn’t differentiate between women children or men.”

The U.N. human rights office said that 11 women and 13 children had been killed, and that pro-government forces had reportedly entered civilians’ homes and killed those inside. “We hope, profoundly, that these reports are wrong, or exaggerated, as the situation is extremely fluid and it is very challenging to verify reports. However, they have been corroborated by multiple reliable sources.”

The reported killings came as pro-government forces, including militias from Iraq, squeezed the besieged rebel-held pocket of the city. “There were no results. Russia refuses everything. The regime refuses everything,” said Col. Abdul Jabbar Akaidi of the Free Syrian Army, a loose alliance of opposition groups. “They want to kill everyone,” he added in a phone interview.

The current crisis is a crescendo of more than four years of armed struggle over Aleppo since rebels seized part of the city in 2012. The Assad regime and allied militias have encroached on rebel territory since late September 2015 when Russia unleashed an intense campaign of airstrikes that devastated the opposition held section of the city.

On Nov. 28, pro-Assad forces staged a lightning advance, and recaptured all but a handful of surrounded neighborhoods. According to the U.N., an estimated 37,000 people fled into government-controlled areas during the most recent offensive. 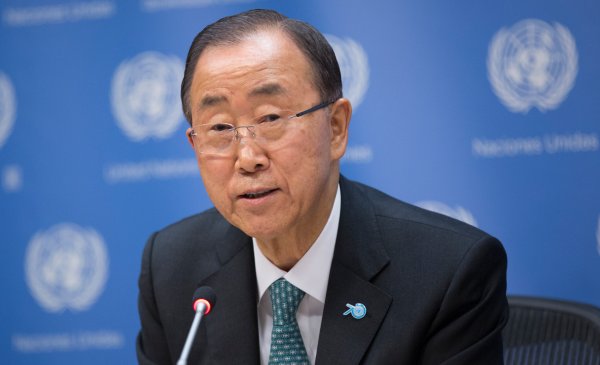 U.N. Chief 'Alarmed' by Reported Atrocities in Aleppo
Next Up: Editor's Pick