President Obama on the Daily Show: Without Proper Intelligence 'You Are Flying Blind'

President Barack Obama has offered a thinly veiled warning to President-elect Donald Trump about the importance of getting regular intelligence briefings.

President Obama appeared on the Daily Show With Trevor Noah on Monday, addressing both his own legacy and the possible future of the country under a Trump Administration with the Comedy Central host. Trump has shunned the daily intelligence briefings that have been made available for him, telling Fox News Sunday he’s “a smart person” who does not “have to be told the same thing in the same words every single day.”

“Every morning ― same words. ‘Sir, nothing has changed. Let’s go over it again.’ I don’t need that,” Trump said.

Obama also suggested Trump may change once his presidency begins. “I think the President-elect may say one thing and do another once he’s here because the truth of the matter is, it’s a big complicated world,” he said, before stating the importance of a nonpartisan intelligence-gathering and reporting process. “The message that I’ve sent to every intelligence agency is, I want it straight,” he said.

On the subject of Russian interference in the 2016 election, which Trump vigorously denies, President Obama said there was widespread consensus that Russian hackers had breached emails of the Democratic National Committee. “This was not a secret running up to the election,” Obama said.

Obama also tried to use the appearance on The Daily Show to urge people to sign up for insurance in the health care marketplace. Noah pointed out the fact that Trump and other Republican leaders are eager to repeal Obamacare, but the President brushed it off as a bit of an empty threat.

“It will be interesting to watch Republicans, who now actually have to produce, come up with a replacement that works better,” Obama said. “I don’t think they will.”

The wide-ranging interview ran on Comedy Central on Monday evening. It was the first interview Obama has held with the mixed-raced South African Noah — similarities the comedian-presenter pointed out during the interview. 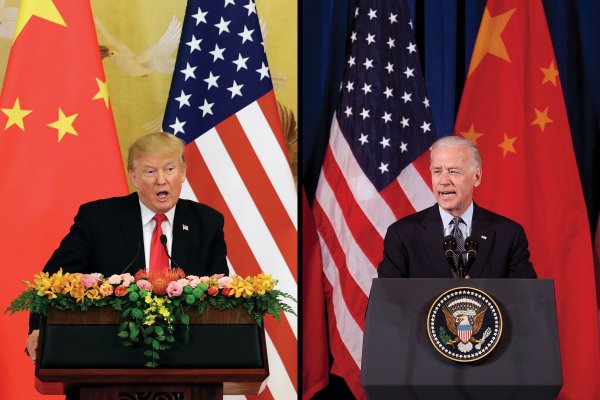 Trump vs. Biden: Facing Off on Taming a 'Rising China'
EDIT POST