Armed military troops and police force travel in trucks through Maungdaw, in Rakhine state, on Oct. 14, 2016, following a government announcement that terrorist groups were behind a series of attacks on security posts
Ye Aung Thu—AFP/Getty Images
By Feliz Solomon

The Burmese army has burned down more than 1,500 homes and other buildings in a systematic pattern of destruction targeting the country’s stateless Rohingya Muslims, according to Human Rights Watch (HRW).

In a statement released Tuesday, the watchdog said it had collected satellite images and interviews with refugees that directly implicate the army, which has consistently denied allegations of wrongdoing and instead blamed suspected Rohingya jihadists, claiming that they have been torching their own communities.

“The Burma government and military’s barrage of unsubstantiated claims that the Rohingya are burning down their own villages have now finally been exposed as the fraud that we suspected all along,” Phil Robertson, deputy Asia director for HRW, tells TIME.

“Rather than continue this game of denials, the Burmese government should allow access to urgently needed humanitarian assistance, and permit U.N. investigators and the media into these areas to investigate how this human rights disaster has come about, and who needs to be held responsible,” he adds.

The accusation is the latest of mounting claims that the Burmese army has carried out a disproportionate response to a deadly attack on security forces attributed to Muslim insurgents.

The Oct. 9 attack on three border security posts by a group of Rohingya militants who call themselves Harakah al-Yaqin triggered a military lockdown on the northern part of Arakan state, also called Rakhine, which lies along Burma’s western border near Bangladesh. Humanitarian aid has been suspended in the area and journalists have been barred as the Burmese army carries out what it calls “clearance operations.”

An estimated 21,000 civilians have since fled across the border into Bangladesh, where they have sought shelter in severely under-resourced refugee camps. Those who fled tell harrowing stories of being terrorized by the armed forces; one Rohingya woman told TIME that she watched her son being thrown into a fire and burned alive.

The U.N.’s human rights envoy for Burma, Yanghee Lee, has warned that evidence indicates the actions of Burmese security forces are “getting very close to what we would all agree are crimes against humanity.”

HRW says its collection of pictures and testimony reveal four new developments: the number of buildings destroyed is higher than previously thought at more than 1,500; the timing and locations of the alleged incidents of arson point to a path taken by troops as they advanced west across the area; the timing and nature of the arson attacks suggest that they were carried out as reprisal; and some of the images show Burmese troops present at the site of at least one major fire.

The Rohingya are a stateless Muslim minority numbering about 1.1 million, and are viewed as one of the world’s most persecuted peoples. They have seen their rights erode rapidly since communal riots in 2012 displaced more than 100,000 and ushered in a state of religious apartheid. Tens of thousands have fled to neighboring countries; those who remained are largely denied freedom of movement and access to basic services.

Suu Kyi’s failure to rein in the armed forces as they carried out counterterrorism operations in Arakan state has led some to question how much authority she actually has. 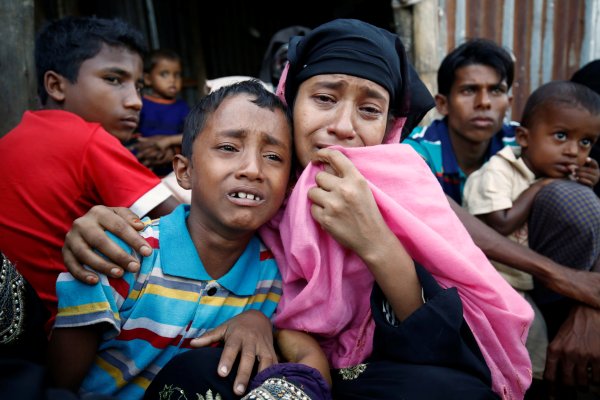 'They Burned Everything'
Next Up: Editor's Pick