Jakarta Governor Basuki Tjahaja Purnama, popularly known as Ahok, center, sits on the defendant's chair at the start of his trial hearing at North Jakarta District Court in Jakarta on Dec. 13, 2016. Ahok is on trial on accusation of blasphemy following his remark about a passage in the Quran that could be interpreted as prohibiting Muslims from accepting non-Muslims as leaders
Tatan Syuflana—AP
Ideas
By Yenni Kwok

On Monday, the governor of Jakarta, Basuki Tjahaja Purnama, attended a celebration of the Prophet Muhammad’s birthday at a mosque in the Indonesian capital. An Indonesian of Chinese ethnicity, and a Christian, he joined devotees singing a religious song along with Muslim celebrants on stage.

He asked the audience to pray for him because the following day he was due in court, charged with blaspheming Islam. “Thank you, ladies and gentlemen, for your prayers,” he said.

The governor, widely known as Ahok, needs all the goodwill he can get. He is the highest-ranking Indonesian official to have ever been charged with insulting a religion in Indonesia. Many already fear that the trial will end in guilty verdict.

Ahok, whose appointment to the Indonesian capital’s top job was opposed by hard-line Muslims, was accused of insulting Islam in a campaign speech on Sept. 27. In the address, he said that religious conservatives who cited a Quranic verse in support of their position that Christians should not hold high office were being duplicitous. He told a crowd: “Ladies and gentlemen, you don’t have to vote for me — because you’ve been lied to by those using [the Quran’s] Surah al-Maidah verse 51.” (An edited transcript and video of his speech that twisted his statement went viral and helped fan public anger.)

In the past two months, the Islamic Defenders Front (FPI) and other hard-line Muslim groups led three massive protests that paralyzed downtown Jakarta, demanding the governor be jailed and the ouster of President Joko “Jokowi” Widodo, whose party endorsed Ahok’s candidacy in the gubernatorial election. Jokowi attended prayers with the demonstrators on Dec. 2 — a move that helped defuse the political tension directed toward him but risked giving legitimacy to the anti-Ahok and anti-Chinese sentiments. “The Politics of Mobocracy,” read the cover of news magazine Tempo English magazine last week, over an image of the rally.

Although moderate Muslim leaders and scholars have maintained Ahok’s innocence, public opinion has started to turn against the once popular governor. In a survey released last week, 45% of respondents said Ahok had insulted Islam, though 88.5% said they didn’t know exactly what he said. “If they didn’t exactly know about Ahok’s statement, then they agreed there was a religious blasphemy or not, what was it based on?” was the question posed by pollster Saiful Muljani in local media.

Ahok’s trial is not the only religiously motivated legal challenge that is ongoing at Indonesia’s courts. This year, an Islamic pro-family group that calls itself the Family Love Alliance — it is also known by its Indonesian initials AILA — filed a judicial review to the Constitutional Court to criminalize gay sex and nonmarital sex. There are fears that, if it succeeds, it will open the path for more legal persecution of other minority groups.

These two recent cases signal not only the growing intolerance toward ethnic, religious and sexual minorities in Indonesia — but also the tug of war between Islamist and secular forces in the country that has been going on for decades.

Indonesia — which has the world’s biggest Muslim population, is a secular country with a separation between state and church, where minority groups are supposed to be treated equal before the law. The secular principle started when the founding fathers agreed to drop the inclusion of Shari‘a in the nation’s constitution — allegedly to accommodate the wishes of religious minorities, especially those in the eastern part of the sprawling, culturally diverse archipelago.

However, the fear now is that Indonesia’s democracy is being hijacked by hard-line and ultraconservative groups. There are both jihadists, who dream of establishing an Islamic state in the country through violent means, and groups who seek to push an Islamist agenda through political and social channels.

As a result, the aims of the constitution are being perverted. According to Indonesia’s criminal code, for example, homosexuality isn’t illegal. But at the Constitutional Court, a so-called expert witness for AILA argued that universal human rights weren’t applicable in Indonesia because the country was built on religious norms.

Hundreds of thousands of Indonesian Muslims in Jakarta on Dec. 2, 2016, hold a peaceful protest against the Jakarta governor who is accused of insulting Islam. The protesters demand the acceleration of legal proceedings against Governor Basuki "Ahok" Tjahaja Purnama
Anadolu Agency—Getty Images

Meanwhile, in a sermon in front of President Jokowi and Cabinet ministers during the Dec. 2 rally, FPI leader Habib Rizieq Shihab said that “God’s law is above everything, that holy verses are above the constitution’s.”

Jokowi recently announced that he would set up a task force to tackle the issue of intolerance. “Apart from Muslims, Indonesia is also home to Christians, Catholics, Hindus, Buddhists and Confucians,” Jokowi said earlier in the Bali Democracy Forum last week. “The peace values are upheld by all religious adherents in Indonesia.”

However, as a politician he has also sought help from religious leaders and has left hard-line groups like the FPI alone. Now, while maintaining a ostensibly neutral stance, Jokowi has effectively thrown Ahok under the bus, saying flatly: “I will not protect brother Basuki Tjahaja Purnama.”

The Ahok trial — like the LGBT judicial review at the Constitutional Court — is a litmus test of Indonesia’s commitment to its principle as a secular, inclusive and tolerant country. So far, it is failing that test. 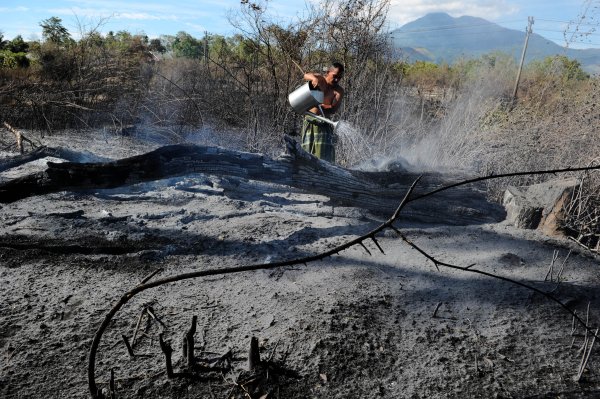 Indonesia: Fewer Forest Fires in 2016, but No Real Progress
Next Up: Editor's Pick