Is Homelessness a Right? Seattle Grapples With How to Respond to a Growing Crisis

Tents line a small green space below Interstate 90 and a short walk to a homeless area known as the Jungle, May 17, 2016, in Seattle.
Elaine Thompson—AP
By Josh Sanburn

For the last three years, Erica Semrau has lived in and out of tent encampments around Seattle, often finding shelter underneath I-90 just east of the city. But her makeshift home has increasingly come under threat.

Driven by concerns over unsanitary conditions and crime in Seattle’s homeless encampments—including two homicides this year in one called the Jungle—officials have targeted these tent cities by confiscating residents’ belongings and sometimes bringing in bulldozers to clear away anything that’s left. Semrau and the thousands of others who live in the camps scatter when the sweeps occur, but they keep returning and rebuilding their temporary shelters, often the very next day. They say the city has given them no other option.

“They’ve swept us three times,” says Semrau, 54. “Clothes, personal stuff, generators. They don’t care. They just bulldoze it and throw it away.”

As the onset of winter pushes shelters to maximum capacity and homelessness continues rising in cities around the U.S., the issue is particularly visible and volatile in Seattle, where the sheer number of those living in public spaces is testing the limits of this historically progressive city. There are now nearly 3,000 homeless people in Seattle, a number that has grown 28% since 2014, stretching the city’s shelter systems past its limits.

“We have 3,000 people outside and we have no place to put them inside,” says Elisabeth Smith, the legislative director of the ACLU of Washington.

Homelessness is a downside of the city’s rapid economic success, which has largely outpaced the nation’s since the Great Recession. The Seattle area added 234,000 jobs between 2010 and 2015, many of them at companies like Boeing and Amazon, whose growth has brought an influx of people working in the tech industry. That’s led to soaring rents throughout the city that have increased at nearly four times the national average.

That conflict between growth and displacement is unfolding in cities across the country. In Denver, videos posted to Facebook last month showed police officers taking blankets away from people camping in unauthorized locations, prompting the city’s mayor to order police not to confiscate their possessions. In San Francisco, the city recently voted to ban tents on public sidewalks and gave officials the authority to seize them if needed.

But in Seattle, the debate over how to address the rise in homelessness has reached a rarely seen level of vitriol. Some politicians are seeking what has been called a “right to camp” that critics say would allow those without shelter to live in nearly all the city’s public spaces. Others want “zero tolerance” for camping in unauthorized spaces like city parks. Mayor Ed Murray has tried to navigate a middle ground, pledging $59 million for homeless services and housing solutions while continuing to clear out some unauthorized encampments. That means homeless residents, who sometimes choose to live outside rather than go to shelters that have restrictive rules and too few beds, are still routinely being shoved from the spaces where they sleep. Many have been swept without the legally required 72-hour warning and ability to retrieve their confiscated belongings afterward, civil liberties groups say.

The issue came to a head at a contentious Seattle City Council meeting in October that included crying parents, residents shouting that they didn’t want their tax dollars supporting homeless encampments and a youth football coach describing homeless people sleeping in a football field in a city park. Some residents were angry about violence in the encampments; others were worried about their quality of life. But the most heated exchanges were over the so-called “right to camp” ordinance.

Read more: Why Amazon is Now Housing the Homeless in Seattle

“People were very upset,” says City Councilmember Mike O’Brien, who introduced the short-lived bill that would have allowed the homeless access to more public spaces. “But it doesn’t do any good that we’re chasing people around. Ninety-five percent of the sites are re-occupied within a day or two.”

Sara Rankin, a University of Seattle law professor who leads the Homeless Rights Advocacy Project, said the homeless crisis has pushed the city’s previously unspoken divisions to the surface.

“A lot of this is bound up in power and discrimination and what it means for our very white city to be grappling with issues of socioeconomic diversity,” she says. “Seattle is at once very liberal, but I think it is more intellectually liberal than it is in practice.”

Following the October meeting, the mayor put forward a new plan that included $12 million for four more approved sites for homeless encampments, doubling the number currently in place. He also wants shelters and official encampment sites to be more welcoming of people addicted to drugs or alcohol. And he pledged to make cleanups more “compassionate.” He tells TIME that officials repeatedly try to get people into housing before clearing them—visiting encampments dozens of times—which is a less confrontational approach than in years past.

Read more: Report: Housing the Homeless Gets Cheaper Every Year

But civil liberties advocates say the mayor’s plans don’t go far enough, and the continued sweeps are inhumane and unconstitutional. They regularly cite a Department of Justice statement that the city’s evictions violate the Eighth Amendment’s ban on cruel and unusual punishment because officials can’t offer adequate alternative housing options. The ACLU and Columbia Legal Services, a Washington-based legal group, are threatening to sue the city.

Thomas Fielding, 48, who has been staying in a tent in an area called Freedom Hill near an I-90 on-ramp for the past two years, has found his own solution to the sweeps. To avoid losing his few belongings—clothes, sleeping bag, 4-foot tent—to the city’s bulldozers, he keeps nearly everything he owns in a suitcase. Even as the cold weather approaches, he believes he has a right to sleep on Freedom Hill, an encampment that has become not just his home, but his community. “It’s a lot of grin-and-bear it,” he says. “But you ain’t got no recourse.” 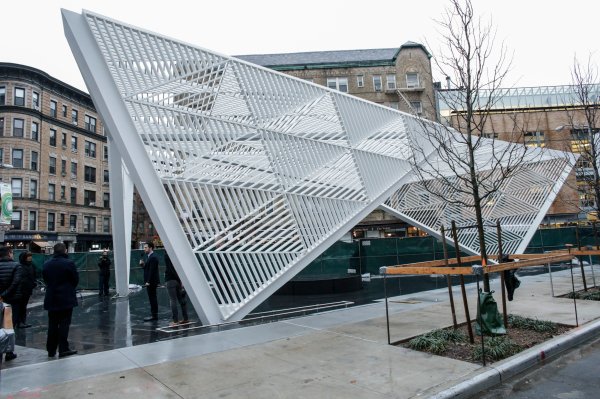