A retired French doctor was in for a surprise when he brought his late father’s art collection in to an auction house: curators have now attributed one of the ink drawings to none other than Renaissance master Leonardo da Vinci. It’s now valued at $15.8 million.

The drawing appears to be an expressive study of the martyred St. Sebastian, depicting the muscled saint bound hand and foot, eyes pleading toward heaven, according to the New York Times. The back of the drawing harbors a few scientific sketches and some writing snippets, helping tip curators off to the piece’s provenance. Another indication? Marks suggest it was made by a left-handed artist. Da Vinci was also left-handed.

And although this find is already making waves in the art world—it’s the first new da Vinci found since 2000—it seems the piece’s owner (who prefers to remain anonymous) is not quite as bowled over by the news as one might expect. When auction house directors delivered the information to their client, his response was measured.

“I’m very pleased,” the New York Times reports he said. “But I have other interests in life other than money.”

On the other hand, the curators called in to authenticate the work were fully enthused.

“My eyes jumped out of their sockets,” the Metropolitan Museum of Art’s Carmen C. Bambach told the NYT about seeing the study, which she estimated was created in the 1480s. 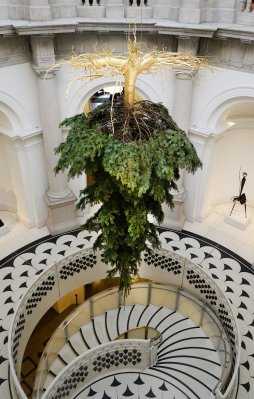 Here’s a First Look at the Tate Britain’s Upside-Down Christmas Tree
Next Up: Editor's Pick