The Teenage Girl Who Circled the Globe in a Model T

Miss Wanderwell reaches Barcelona during her attempt to set an endurance record by driving a motor car around the world. She set off from Atlanta in September 1919.
Vidal / Getty Images
By Erin Blakemore

The journalist Nellie Bly may be famous for having gone “around the world in 72 days” in the late 19th century, but she wasn’t alone. A few decades after the pseudonymous Bly made waves with her around-the-world trip, another woman with an assumed name made her name by driving through 75 countries in a Ford Model T. Her name was Aloha Wanderwell—and though she is largely forgotten today, she once represented the thrill of travel in a world where cars were new.

Born in Winnipeg, Canada, Idris Galcia Hall didn’t initially seem destined for greatness. As a girl, the only two things that distinguished her were her height—she eventually reached six feet—and her restlessness. Her father, a British Army reservist, died during World War I and she was sent to school in France shortly after the war ended. There, she drove her teachers crazy with her rebelliousness and her tomboyish ways.

But those traits soon set her on a collision course with adventure. In 1922, she came across an ad in the Paris Herald, the European version of a New York paper. “Brains, beauty and breeches,” it read. “World tour offer for lucky young woman.”

Without realizing it, Hall had run across another restless soul.

The ad had been placed in the paper by a man named Captain Walter Wanderwell. That wasn’t his name, either—he ditched his original name, Valerian Johannes Piecynski, in favor of something more worldly and less Polish. Wanderwell was a self-made man, a mysterious figure whose name was associated with World War I espionage (he served time in federal prison in Atlanta after he was accused of spying) and a taste for international travel.

Sixteen-year-old Hall was intrigued—and when Wanderwell met her, the feeling was mutual. He immediately invited her to work as his secretary. Her job would be to support the Work Around the World Educational Club for International Police during an around-the-world tour.

Neither the club nor Wanderwell were what they seemed. Though WAWEC, as it as called, was billed as a kind of support group for the newly founded League of Nations, it was suspected by the FBI of being a kind of private army. And though Wanderwell styled himself as a brave outdoorsmen and traveler extraordinaire, he was in fact a smooth talker and a soldier of fortune with a knack for extracting money and favors out of anyone and everyone.

The ambitious around-the-world WAWEC tour was supposedly aimed at ad hoc international peacekeeping in a world ravaged by war, but its real purpose was to make money from a group of volunteer cadets whose dues financed the publicity-laden trip. Wanderwell also secured funding for the journey from the Ford Motor Company, which donated Model Ts for the voyage.

Hall’s mother didn’t want her underage daughter’s reputation to be damaged by the world tour, so she arranged for Wanderwell to declare her his ward and for her daughter to take on his last name. While he was at it, he re-christened her Aloha, and they set out on a trip called “The Million Dollar Wager.”

The premise was simple: Wanderwell would compete against his wife, Nell, in a race around the world with two Model T teams. Part endurance race, part expedition, part public relations stunt, the journey took Aloha and her boss from Asia to Africa and beyond. They financed their tour by making films of the sights they encountered, speaking in public and signing up volunteers for the WAWEC. Armed with a new name, plenty of attention and freedom she had never dreamed of at school, Aloha soon realized she had star power on par with her charming boss. She had been hired as a translator and Girl Friday, but soon was driving Wanderwell’s Model T from Paris to Peking and beyond.

Together, the Wanderwells covered dangerous terrain, from places ravaged by civil war to terrain where automotive fuel could not be located. They encountered indigenous cultures, wild animals and swaying bridges right out of an Indiana Jones movie. Aloha often found herself behind a camera, documenting her amazing and often dangerous journey.

By the time the Wanderwells finished their trip, they were famous—not least because of Aloha’s new reputation as the world’s most well-traveled girl. That fame nearly backfired; apparently American agents wanted to arrest the Captain for trafficking Aloha, who was still under age. They took preemptive action once they got into the United States. The Captain obtained a divorce, Walter and Aloha married, and they both walked free.

The wager portion of the trip was complete, but the Wanderwells continued to wander. They kept touring the world and Aloha kept making movies, including groundbreaking films of the Bororo people of Brazil and footage documenting daily life in 43 countries. But her husband’s life was cut short in 1932, when he was shot and killed under mysterious circumstances on the couple’s yacht. His murder has still never been solved.

Aloha kept her fictitious first name, but took on the more staid “Baker” when she remarried a year later. She continued to travel, make movies, write memoirs, and give lectures about her adventures until her death in the 1990s. Today, the historic footage she gathered is considered to be groundbreaking, and her movies can be found in both the Smithsonian and the Academy of Motion Picture Arts and Sciences’ film archive.

The girl with a taste for adventure was also a woman who proved what an intrepid traveler with a Model T and a camera could accomplish—even if her name has faded into relative obscurity today. 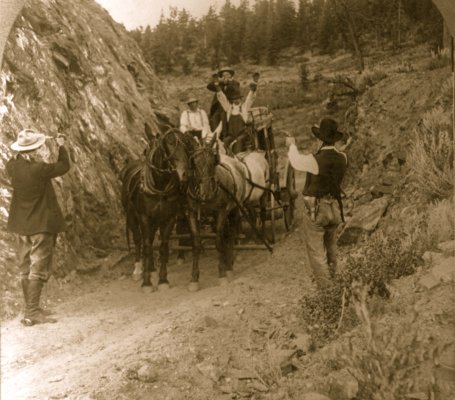 The Surprising Story of America’s Most Famous Female Stagecoach Robber
Next Up: Editor's Pick