At least three men in the new Presidential administration have been accused of abusing women. Andrew Puzder, President-elect Donald Trump’s pick for Secretary of Labor, was accused of punching, hitting and pushing his ex-wife in the 1980s. Steve Bannon, Trump’s chief strategist and senior counselor, was charged with misdemeanor domestic violence and battery against his now ex-wife in the 1990s. And Trump himself has been accused of sexual assault and harassment by more than a dozen women.

All of the men have denied wrongdoing, and none of them have been found guilty in court. But in other administrations, allegations like these would likely be disqualifying. Few White House officials have ever been publicly accused of domestic violence, and none of those have continued to serve after the allegations were made. Obama White House staffer Barvetta Singletary was immediately placed on unpaid leave from the White House after she was arrested for allegedly shooting at her boyfriend, and subsequently resigned. John Fedders, chief of enforcement for the Security and Exchange Commission under Reagan, resigned after his sister-in-law informed the White House counsel that he routinely beat his wife. Sources inside that White House said that Reagan refused to keep a domestic abuser on his staff, no matter how well he did his job. The White House has seen its fair share of adultery, sexual harassment and groping, in and around the Oval Office. Even sitting presidents like John F. Kennedy and Bill Clinton carried on affairs with subordinates (Clinton was accused of groping on several occasions).

Trump has already proven that what might be dealbreakers for anybody else are fine by him. And the presence of alleged abusers in his inner circle suggests that Trump is not doing much to address the widespread perception that he does not respect women. Seventy percent of voters in exit polls said Trump’s treatment of women bothered them (but 30% of that group voted for him anyway) and 43% of voters polled by Pew before the election said Trump had no respect for women at all. These appointments seem to show that he’s not too concerned about addressing that perception.

When those dozen women came forward during his campaign to accuse him of sexual assault, Trump called the allegations “lies,” said he was a “victim” of a “smear campaign,” and threatened to sue them. The charges against Bannon and the allegations against Puzder have thus far not affected the standing of either appointee.

Bannon, who until recently ran a website that was a platform for white nationalism and neo-Nazi content, was charged with domestic violence and battery in 1996 after his then-wife Mary Louise Piccard claimed he attacked her in their home. Police arrived to find Piccard with red marks on her neck and wrists where Bannon allegedly grabbed her, and the phone shattered after Bannon allegedly threw it against the wall to keep her from calling the police. The case was dismissed after Piccard failed to show up to testify. She later said that Bannon had threatened that if she testified against him, she would be left with no money and no way to support her children. The charges against Bannon did not appear to change anything about his standing with Trump.

Puzder’s ex-wife Lisa Henning alleged in a 1986 deposition that Puzder “attacked me, choked me, threw me to the floor, hit me in the head pushed his knee into my chest twisted my arm and dragged me on the floor, threw me against a wall, tried to stop my call to 911 and kicked me in the back.” The deposition, which was filed as part of their divorce, also included an allegation that Puzder punched her in the car and that police were called to the home twice to respond to domestic disputes. Puzder denied the allegations at the time, and Henning — who now goes by the name Lisa Fierstein– has retracted her allegations in a statement provided by the Trump transition team. “Many years ago I impulsively filed for divorce and was counseled to file allegations that I regretted and subsequently withdrew over thirty years ago,” she said.

But Henning’s lawyer at the time, Dan Sokol, says he found his client’s domestic violence allegations credible, and that her claims were backed up with medical evidence. “She described it to me as an ongoing pattern with several episodes involving physical violence,” he said. “I felt that she was credible, I believed her, and I believed that we could make a case to a judge under the facts that she related to me.”

If Reagan had heard about this, he might have come to a different conclusion. 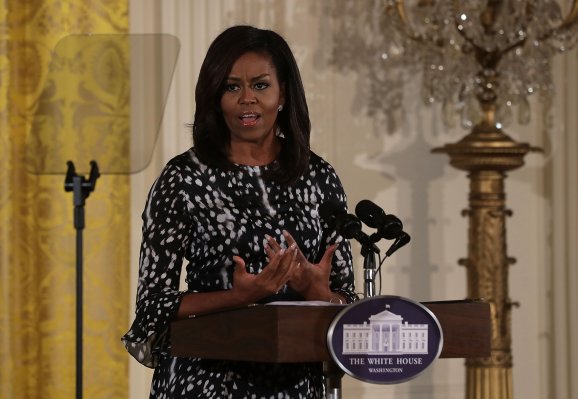 West Virginia Official Who Called Michelle Obama an ‘Ape in Heels’ Can Return to Work
Next Up: Editor's Pick