The British actress explained on the Christmas special episode of The Jonathan Ross Show — airing Saturday — that her daughter has been “talking a lot, she’s running, she’s literally repeating everything we say so we’re having to be really careful.”

However, Knightley and her husband, James Righton, experienced a strange moment in the aftermath of Trump’s surprising win.

The 31-year-old actress said she brought her daughter into bed with her and her husband in the morning.

“She’s like this watching the television, completely silently and totally still for about four minutes and she rolls over onto her back and she closes her eyes and she goes, ‘F—!’” she said. “I’m very proud.”

The Atonement star also said she’s been busy training her daughter to sit still in preparation for Christmas dinner with their family.

“We’ve actually been testing out and making Sunday roasts to see if she could sit at the table for long enough for the Christmas dinner,” she said. “All that keeps happening is she looks at the brussels sprouts and she goes ‘Ball! Ball!’ and she grabs them and lobs them at you. I’m hoping that doesn’t happen on Christmas day.” 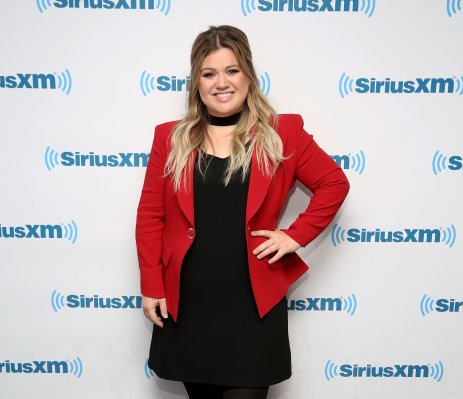 Kelly Clarkson and Her Husband Rarely Have Time for Date Nights
Next Up: Editor's Pick