The big surprise on The Late Show Wednesday night was supposed to be Super Mario Run, Nintendo’s imminent $9.99 mobile game that’s out December 15 for iPhones and iPads (read TIME’s hands-on here). And it was certainly cute to watch Jimmy Fallon breathlessly tap his way through a goomba-filled maze of classic platforms and pipes.

But all the while, on the table between Fallon and Nintendo of America president Reggie Fils-Aimé, sat a big yellow box with a question mark. What was under the question mark?

A Nintendo Switch, of course. It’s the Kyoto games-maker’s next big thing: a home video games console that’s also a mobile tablet you can play on the go. Nintendo revealed the Switch’s name and summed up its essential ideas in a short October video, then pointed to an event that’s happening January 12 during which more info will be revealed, including the system price. So its appearance on The Tonight Show (watch from the 4:56 mark) was a genuine revelation.

(So, by the way, was watching Mario creator Shigeru Miyamoto play the theme to Super Mario Bros. with The Late Show house band The Roots.)

Not that we got to see any more about what the Switch is, besides being a set-top that’s also a tablet you can pluck from a cradle and keep playing games using removable left and right control blades. Mostly what Fallon did was play The Legend of Zelda: Breath of the Wild, Nintendo’s upcoming open-world Zelda action-adventure, which the company’s been showing a fair lot of lately.

Reggie demonstrated the game on the big screen for a few minutes, touting its breadth and open-ended nature. As he played, Reggie set up Fallon for a bit of combat, at which point he laid his Switch gamepad down, pulled the Switch tablet from its dock, tapped something onscreen (a prompt to okay the transition or un-pause it?), then handed the tablet — now displaying what had been on the big screen — to Fallon to keep playing.

And off Fallon went. It’s hard to capture small screens on TV, so the rest of the video is mostly Fallon geeking out about Switch’s physical facets: the removable blade controls, the little kickstand on the back, and the promise of players with their own Switch systems squaring off across tables with each other.

The nearly five minute demo is more an extended tease than anything, but if you’re excited about the potential of this thing (and who isn’t?), it’s worth a watch. 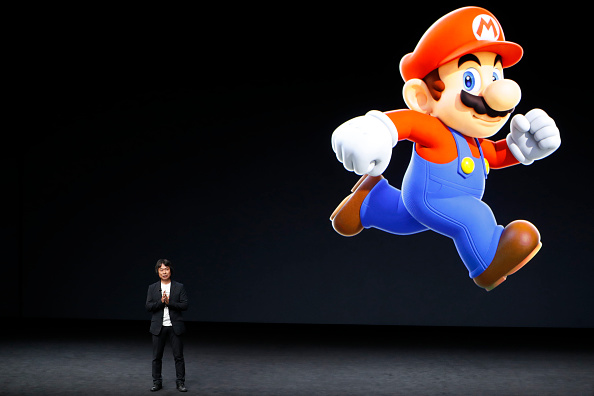 Watch the Creator of Super Mario Jam with The Roots on The Tonight Show
Next Up: Editor's Pick