Some things never change in war. It began with rocks among cavemen, until one of them sharpened his stone, creating a better weapon. That, in turn, spawned the shield.

The same thing is happening now with drones. Unmanned Aerial Vehicles—they go by a variety of names inside the U.S. military—came into their own following 9/11. Once outfitted with Hellfire missiles and other weaponry, they created a new kind of war.

They lurked out of sight and sound, some killing in an instant when the trigger was pulled, perhaps on the other side of the world. For more than a decade, U.S. drones stood pretty much alone at the top of the hunter-killer pyramid.

Well, one thing is sure: the rest of the world, including the bad guys, aren’t standing still.

That’s got the Army—you know, the guys most likely to be attacked by enemy drones—a little concerned. “U.S. forces will be increasingly threatened by reconnaissance and armed Unmanned Aerial Vehicles (UAVs) in the near and far future,” the service says, detailing a two-day session on the topic in Huntsville, Ala., later this month. Written proposals on ways to defeat enemy drones were due April 1.

“All levels of detection, decision, and defeat should be considered when developing and proposing a capability,” the Army says. Since the Army calls drones “UAVs,” it only makes sense that it calls its yet-to-be-perfected drone-killing technologies “CUAS,” for Counter Unmanned Aerial System capabilities.

“Engagement options should consider the echelon of employment, air and ground coordination measures, prevention of civilian casualties, fratricide, cost per engagement, and the number of engagements possible in a surge application,” the Army says. “Both kinetic and non-kinetic solutions are encouraged” (“Kinetic” means destruction by physical collision, like the 20-pound warhead on an AGM-114 Hellfire. “Non-kinetic” means a way of defeating a drone using electronic warfare or other ways of keeping an incoming drone away from its target).

“Only U.S. based and owned companies are eligible to respond,” the Army says. “Foreign participation is not authorized for this effort.”

Meanwhile, the Air Force wants to construct an “RPA Mission Control Complex Physical Protection System” around its drone operations at Creech Air Force Base outside Las Vegas. (The Air Force prefers to call its drones RPAs—Remotely-Piloted Aircraft—emphasizing that a person remains in control, even if not in the cockpit).

The northeast corner of Creech is where airmen sit at desks and control many of the MQ-1 Predators and MQ-9 Reapers that have been flying over Afghanistan and Iraq for the past decade.

The service is seeking someone to build an “Intrusion Detection System (IDS) Sensor Platform Fence” at Creech. “The project,” it adds, “will include construction of circulation control fences within the Mission Complex secured area to provide secondary security and compartmentalize access at seven (7) Base-identified critical facilities and areas.”

Such a fence, of course, will help stop intruders on the ground. But it won’t be much help against…drones. 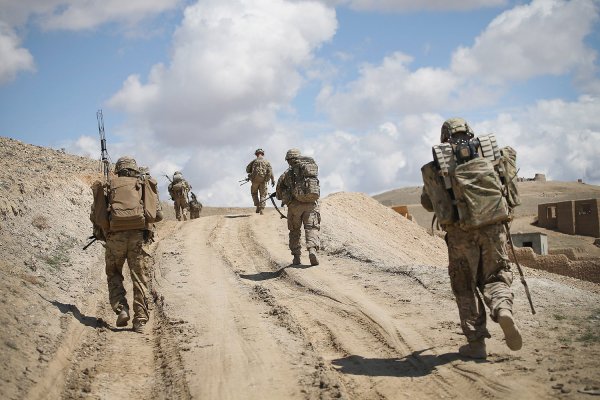 No U.S. Troops Died in Afghanistan or Iraq Last Month
Next Up: Editor's Pick