Even when her boyfriend, Prince Harry, is away, Meghan Markle keeps him close to her heart!

The 35-year-old Suits star stepped out in Toronto, Canada, on Saturday wearing a gold, personalized necklace with the letters M and H on it.

Prince Harry, 32, was on a 15-day tour of the Caribbean on behalf of Queen Elizabeth, but made a major detour to see Markle on his way back to Britain.

The prince is said to have spent the day with the American actress at her home on Sunday.

The jewelry is a Maya Brenner Asymmetrical Letter Necklace in 14K gold. It is available in yellow, rose or white gold and retails for about $240 ($60 for additional letters).

Coded jewelry seems to be a common theme in their relationship. The couple regularly wear matching beaded bracelets.

Although it was originally thought that Harry would immediately head back to Britain — where he has an official engagement on Wednesday — he instead flew straight to Markle.

A friend of the actress recently told PEOPLE that she is “head over heels” for Harry. And as he was on his way to see her, Meghan cheekily displayed her colors when she shared a photo of her dog wearing a sweater decorated with the British flag.

On Wednesday, Harry will be helping out in the financial center of London as he attends the ICAP fundraising day, which will partly be donating cash to Sentebale, Harry’s charity that helps young people living with HIV in Southern Africa. 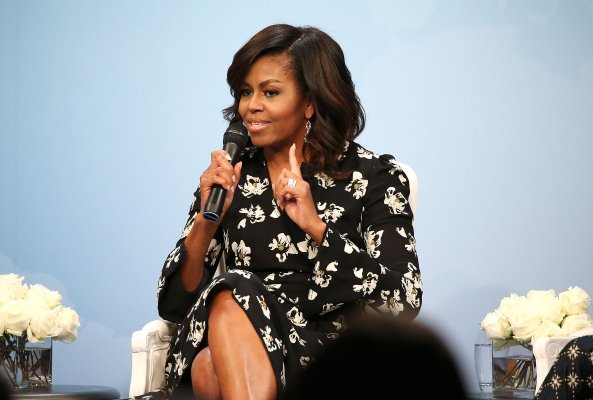 Michelle Obama Didn't Wait Up for Election Results
Next Up: Editor's Pick