President-elect Donald Trump, who was revealed Wednesday as TIME’s 2016 Person of the Year, called Saturday Night Live a “terrible show” and suggested the long-running sketch comedy program is on its way to being canceled.

Trump been critical of the show and of actor Alec Baldwin’s signature impersonation of him, recently taking to Twitter to call the show “unwatchable” and “sad.” He doubled down on his negative review Wednesday during a phone interview on the Today show just moments after TIME’s selection of him as Person of the Year was revealed on the show.

“I don’t think it’s good,” Trump said when asked about Baldwin’s portrayal of him. “I like him as an actor, but I don’t think his imitation gets me at all, and it’s meant to be very mean-spirited… and I don’t like it.”

The Emmy Award-winning show on NBC premiered in 1975 and entered its 42nd season this fall.

Trump on Wednesday also defended his frequent use of Twitter, which he called a “modern day form of communication” and a way for him to get out information faster than a press release and “more honestly” than through news outlets.

Every year TIME editors choose the Person of the Year, a selection of the person who most influenced the news, for better or for worse. Trump is called the “President of the Divided States of America” on TIME’s cover—a title he said did not offend him. “I’m not President yet. I didn’t do anything to divide,” he said. “We’re going to put it back together and we’re going to have a country that’s very well healed. We’re going to do a lot of great things. It’s going to be something very special.” 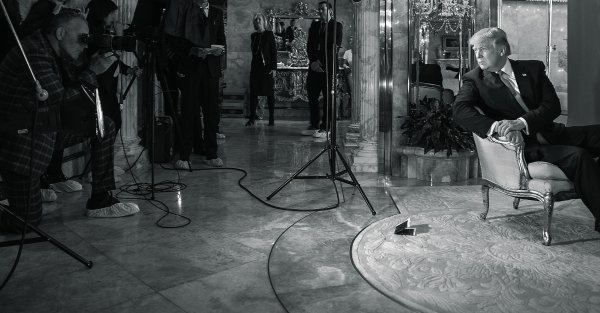 Behind TIME's Donald Trump Person of the Year Cover
Next Up: Editor's Pick