The Company That Makes Apple’s iPhones in China Wants to Expand to the U.S.

Amid President-elect Donald Trump‘s push for manufacturing jobs to come and stay in the U.S., a company that builds Apple products in China said it’s considering a stateside expansion.

Foxconn Technology Group, which manufactures the iPhone and other products, is in preliminary discussions to branch out to the U.S., the Wall Street Journal reports. The size of its U.S. investment has not been determined.

The news broke just before Trump was revealed as the 2016 TIME Person of the Year on Wednesday. In a recent interview with TIME ahead of his selection as Person of the Year, Trump said he’s encouraging Apple to bring manufacturing jobs to the U.S.

“I said to Tim Cook, it’s my ambition to get Apple to build a great plant, your biggest and your best, even if it’s only a foot by a foot bigger than some place in China,” Trump said. Apple declined to comment.

Apple is the largest customer of Foxconn, which focuses on electronics assembly. The company also invests in sectors like robotics and health care. Trump has repeatedly criticized U.S. companies that send manufacturing jobs overseas, something Apple has not said it plans to do. The tech giant employs tens thousands in the U.S., many at its Apple Store retail locations, and jointly operates a manufacturing facility for its Mac Pro computers in Austin, Texas with the Taiwanese firm Flextronics.

It’s unclear if Apple manufacturing jobs would be the ones moved to the U.S. as a result of the potential Foxconn expansion. 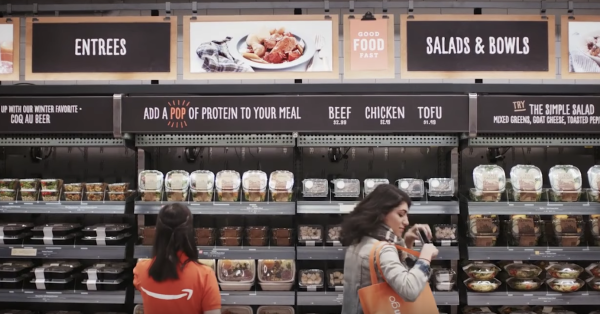 How Amazon Plans to Totally Reinvent Grocery Shopping
Next Up: Editor's Pick