In a dramatic day of voting that could have major implications for Europe’s economic and political future, citizens from Italy and Austria cast their ballots in two closely-watched initiatives.

The referendum on Italy’s constitution and the presidential election in Austria were a barometer of the strength and reach of the populist insurgency threatening to upend Europe’s established political order.

With elections in France, the Netherlands, Germany, and now possibly Italy coming in 2017, the next 12 months are shaping up to be seminal for European politics and the future of the European Union.

With the possibility of electing the first far-right head of state in Western Europe since World War II, Austria’s presidential contest garnered a degree of suspense and international attention otherwise out of proportion for what is largely a ceremonial office in a country of fewer than nine million people.

Those nine million people were given the choice between Norbert Hofer, the candidate of the far-right Freedom Party, and Alexander Van der Bellen, an independent former Green party leader. The contest was a rerun of an election in May in which Van der Bellen beat Hofer by 31,000 votes, or less than one percent of ballots cast.

Two weeks after the election in May, Freedom Party leaders, citing a “massive number of irregularities and mistakes”, appealed the result to Austria’s Constitutional Court.

In July, the Court upheld the appeal, annulled the result, and called for an entirely new election. The new vote was supposed to take place in October but had to be postponed after defective adhesive was discovered on some of the absentee ballots.

Predictions were that a Hofer victory would prove the latest example of the rise of European populist, anti-immigrant parties; Freedom Party leaders have warned against the “Islamisation” of Europe and of a coming “civil war” as a result of mass Muslim immigration. But exit polls on Sunday showed that Van der Bellen received 53.6% of the vote, a higher proportion than his total in May.

In the first round of presidential voting in April, the two parties finished fourth and fifth, respectively, demonstrating Austrian voters’ staunch opposition to the country’s centrist political establishment.

Despite Hofer’s defeat, the Freedom Party remains a political force in Austria. Opinion polls show that the party is on track to win the most votes in parliamentary elections, which must be held before the end of 2018. This raises the once unthinkable possibility that the party could even head the government one day.

Italy says No to reform, and to Renzi

On the other side of the Alps, Italians voted in a referendum on a series of constitutional reforms that would have brought major changes to the country’s 68-year-old constitution.

These would have included a dramatic reduction in the power and size of the senate, affecting how laws are passed, and the power balance between the central government and the country’s 20 regions.

Proponents of the reforms said they would ease the country’s notorious legislative and administrative gridlock (Italy has had 63 governments in 70 years) and would facilitate structural reforms to reinvigorate Italy’s stagnating economy. Renzi was so confident earlier this year that the measures would pass that he staked his political future on the outcome, promising to resign if the referendum failed.

This turned out to be a serious error. Some Italians used the referendum as a way to protest their perception that Renzi has failed to deliver on promises to turn around the Italian economy. The vote revealed the depth of disillusionment with the prime minister: the No camp won with 60% of the vote.

In Italy, the unemployment rate remains above 11%. And at around 36.4%, Italy has one of the highest youth unemployment (under 25) rates in the EU. Italy’s per capita GDP and per capita income are lower today than they were ten years ago.

Opposition from other voters, even ones who acknowledge that Italy needs far-reaching reforms, centred around worries about the concentration of power in the executive.

The Economist, for example, in an editorial that argued that Italian voters should vote No, warned that the proposals would risk creating conditions ripe for “an elected strongman” by consolidating power in the national government.

With Renzi’s resignation, President Sergio Mattarella will now consult with the country’s various political parties on how to move ahead. Mattarella could announce the formation of a caretaker government, headed by an appointed technocrat, or he could call snap elections next year.

If elections are called, the populist Five Star Movement or the far-right Northern League could make electoral gains. The Five Star Movement garnered a quarter of the votes in Italy’s last parliamentary election in 2013, and won mayoral races in Turin and Rome this year. Current polls show its popularity reaches around 30%, falling just behind Renzi’s Democratic Party.

The impact on Italy’s financial markets could be severe. Italy’s borrowing costs are almost certain to rise, which will make it harder for the government to service its debt, which is already 133% of GDP, the highest level in the EU after Greece.

The vote could also affect Italy’s banking system, which has been in a state of crisis for a decade. Major banks across Italy are full of bad loans and in desperate need of recapitalisation. Investors will be wary to step in at this moment of uncertainty. Italy’s third-biggest bank, Monte dei Paschi di Siena, is on the brink of insolvency. Its collapse could trigger a banking crisis, which could lead to a financial crisis across the entire EU.

The next year will reveal the direction of Italy’s economic and political future, and whether its membership in the Eurozone becomes increasingly untenable. The short- and medium-term repercussions of the No vote are not yet clear, but any banking crisis could push Italy out of the Eurozone, which could in turn lead to the end of the single currency.

The rise of the populists

The Austrian and Italian votes revealed the strength of anti-elite and anti-establishment sentiment across Europe. Despite Hofer’s defeat, he still garnered more than 45% of the vote, evidence that the stigma in Europe of openly supporting right-wing candidates and parties has eroded.

What were once fringe parties – the National Front in France, the Party for Freedom in the Netherlands, the Five Star Movement in Italy, the Freedom Party in Austria, Alternative for Germany – are now powerful electoral forces.

For decades, the EU political order has been based on centrist governments, open borders and free trade. But the EU has witnessed a number of shocks and other disruptive political forces over the past two years, including an unprecedented number of migrant and refugee arrivals that strained its commitment to open internal borders, a wave of terrorist attacks particularly in Paris and Brussels, and the British vote in June to exit the bloc.

There are today credible fears that populism from either the left or the right could dismantle some of the major accomplishments of European integration, including open internal borders and the single currency.

In Poland and Hungary, right-wing leaders with authoritarian leanings are already in control of government; 2017 could see them joined by others whose commitment to political liberalism and constitutional limitations is lacking.

The French presidential election in May 2017 is thus crucial for the EU’s future. Former Prime Minister François Fillon, who will be the candidate of the centre-right, is likely to face off with Marine Le Pen, the leader of the far-right National Front, in the second round of voting.

A Le Pen victory remains a remote possibility, but this year’s electoral surprises — from the British vote to exit the EU and to Donald Trump’s victory in last month’s US presidential election — reveal the danger of discounting Le Pen’s chances entirely.

Despite lower migration this year compared to 2015, Europe could yet face a renewed influx. Following a deal with Turkey earlier this year, the flow of migrants and refugees travelling from Turkey into the EU drastically decreased. But following a vote in the European Parliament to suspend talks with Turkey over its potential membership of the EU, Turkish President Recep Tayyip Erdoğan threatened to re-open the borders.

If he reneges on the agreement, and Europe faces yet another refugee crisis of the same scale and magnitude as last year’s, Europe’s system of internal borders is unlikely to survive.

Finally, UK Prime Minister Theresa May has said that Britain plans to begin withdrawal negotiations by the end of March 2017. French President François Hollande and German Chancellor Angela Merkel have called on other EU governments to show a united front. And in a message to other EU countries that might be tempted to follow the UK’s exit, Hollande cautioned they would not be able “to get the supposed advantages without the obligations” of membership.

A series of key decisions and events over the next year could shape the direction and future prospects of European integration in fundamental ways. What happens in 2017 could determine whether the EU is able to survive this current period of crisis in a weakened but still mostly intact state, or whether the European project of economic and political integration was just a moment, a phase in Europe’s long history. 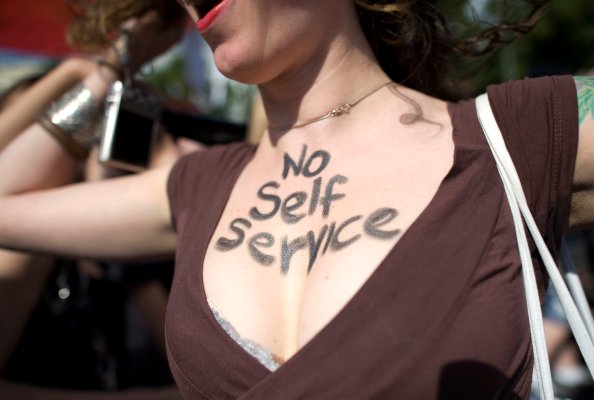 27% of Europeans Think Rape Can Be Justifiable, New Study Finds
Next Up: Editor's Pick