Pro-democracy political activist and a member of the Demosistō party Joshua Wong faces the media after leaving the Eastern Court in Hong Kong on July 21, 2016.
Anthony Wallace—AFP/Getty Images
By Feliz Solomon / Hong Kong

The 20-year-old poster boy of Hong Kong democracy, Joshua Wong, has distanced himself from his father Roger Wong, who has launched an online campaign against an initiative by HSBC to promote awareness of LGBT rights.

The bank has put on temporary display rainbow-colored replicas of the famous lions that guard the entrance of its global headquarters in Hong Kong. Created by a local artist, the sculptures are designed to promote inclusiveness and tolerance.

But Wong senior, a known adversary of Hong Kong’s LGBT community, says the multicolored statues were “disgusting” and could “hurt the feelings” of the bank’s customers. He claims to have collected about 1,800 signatures for an online petition asking the company to remove the statues, withdraw a policy granting benefits to same-sex partners of employees and withhold open support for LGBT causes.

A statement attached to the petition says that the bank’s move is tantamount to “trampling on the existing family values of Hong Kong.”

A man takes a photo of his wife as she poses in front of a lion painted in rainbow stripes outside HSBC's main office in Hong Kong on Dec. 6, 2016
Anthony Wallace—AFP/Getty Images

Speaking to TIME on Tuesday, Joshua unambiguously distanced himself from his father’s activities.

The younger Wong became a leader of the 2014 Hong Kong democracy protests, known as the Umbrella Revolution, when he was just shy of his 18th birthday, appearing on the cover of TIME. He has since become a globe-trotting activist, meeting members of U.S. Congress and rallying Asia’s youth to demand more democratic governance.

He is also the founder of a socially progressive political party, Demosistō, which on its website calls for passage of an antidiscrimination law, recognition of same-sex unions and legal protections for transgender people. The party has pushed for Hong Kong to enact a law called the Sexual Orientation Discrimination Ordinance (SODO), which, if passed, would be a milestone for the semiautonomous Chinese city, as it presently offers no explicit protections for sexual minorities.

“Me personally, I support this,” Joshua Wong tells TIME.

In what surely must make for awkward talk at the dinner table, the elder Wong is the founder of an organization explicitly opposed to the policy his son has lobbied for, called the Family School SODO Concern Group. It appears, however — at least on social media — that his progeny is more popular. A Facebook page for Roger Wong’s anti-gay lobby group has only 3,002 Likes compared to his son’s 305,067. 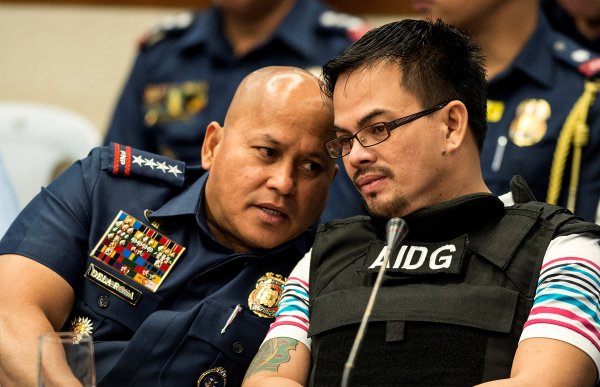 Philippine Investigators Say Mayor Was Murdered by Police
Next Up: Editor's Pick