'Trump Truly Is a Mad Dog': How Chinese Social Media Melted After the Taiwan Call

Passengers read news or watch videos on their smart phones in the subway on Jan. 28, 2015.
Zhang Peng—LightRocket/Getty Images
By Charlie Campbell / Beijing

The ruling Chinese Communist Party (CCP) was careful not to send bilateral relations into an unrecoverable tailspin before Trump had even entered the Oval Office. Instead, they blamed the faux pas on a “trick” by Taiwan’s new Beijing-skeptic leadership, as well as the real estate mogul being a geopolitical neophyte.

Residents in China were far less forgiving, however, and tens of thousands have given Trump both barrels on China’s own Twitter-like microblog, Weibo.

Read More: By Speaking to the President of Taiwan, Donald Trump Lays Down the Gauntlet to China

“Let’s wait and see Trump mess up America,” posted one user. “Let’s get out chairs and prepare [traditional snacks of] sunflower seeds and peanuts, enjoying the chaos soon to engulf the U.S. Trump truly is a mad dog.”

“Let’s ignore him,” posted another. “As just an Internet celebrity, Trump gets scared when nobody pays attention to him.”

The subject of Taiwan, which effectively split from the mainland in 1949 following China’s civil war, is an incredibly touchy subject for Chinese. Decades of CCP propaganda have ingrained the belief that Taiwan is inexorably part of China, even as the island’s own citizens increasingly see themselves as distinct.

In fact, Taiwan was ruled by Japan during the early 20th century, and was placed under Chinese control after World War II. At the culmination of China’s civil war, the Chinese Nationalists, who had ruled China since 1928, were defeated by the Communists and fled to Taiwan. The U.S. continued to recognize Taipei as the true Chinese government until 1979, when the Carter Administration switched to Beijing. The call Trump received was the first direct contact between the leaders of Washington and Taipei since that time.

“Trump only understands business profits, not geopolitics,” posted one Weibo user. “His election indicates the waning of the U.S.”

“I will express my anger by not using U.S. products: no iPhones, no McDonald’s, no electricity!” joked another.

Following Trump’s phone call, Beijing lodged a complaint with the White House, which in turn insisted that nothing had changed regarding Washington’s relationship with Taiwan. Trump, however, unleashed a series of unrepentant tweets, asking why the U.S. can sell Taiwan weapons but their leaders cannot talk, and also alleging currency manipulation by Beijing and broaching China’s expansive territorial claims in the South China Sea. Naturally, that really got Weibo riled.

“China didn’t approve the U.S. selling arms to Taiwan or deploying [the missile system] THAAD in South Korea,” posted one user. “Trump really shouldn’t consider himself the big boss, as the U.S. is not a superpower anymore. A war would do no good for China, but it would be worse for the U.S.”

“Trump, I dare you to open an account on China’s Weibo!” taunted another.

Before the election, Trump was oddly popular in China considering his frequently Sinophobic rhetoric, with an approval rating polling just below Democratic rival Hillary Clinton at 39%. An old Instagram video of Trump’s granddaughter Arabella reciting Chinese poetry went viral, and many Chinese saw him as probusiness and not as hawkish in East Asia as outgoing President Barack Obama. That perception, however, has dissipated after the Taiwan phone call.

“After Trump talked to Taiwan, I really pity those Chinese who support Trump,” posted one Weibo user.

“Trump’s unwise confrontation with China demonstrated his swindler mentality,” posted another. “Even though he won the election, he is not qualified as a President. Without the necessary virtues to rule, disaster will come.” 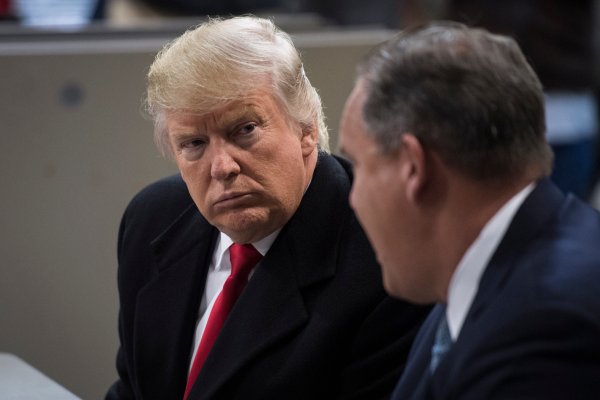