I’m an Undocumented Immigrant and an Evangelical Christian

Liz Dong is the Midwest Mobilizer for the National Immigration Forum’s Bibles, Badges & Business for Immigration Reform network and a recipient of Deferred Action for Childhood Arrivals

Since the U.S. presidential election, I find myself belonging to two at times contradictory groups: one that President-elect Donald Trump is targeting and another that helped carry him to the presidency. I’m a recipient of Deferred Action for Childhood Arrivals (DACA), and I’m an evangelical Christian.

I came into the country from China legally as a dependent under my mom’s work visa when I was 10. I lost my status in 2001 when our immigration lawyer forgot to attach my paperwork to my mom’s when she changed jobs and needed to apply for a new employer-sponsored work visa. We tried to find workable solutions to reinstate my status under the current immigration system, but none existed.

I was devastated by the discovery that I was now undocumented. Some 11 million immigrants live in the U.S. without proper documentation, due to overstaying their visas, crossing the border illegally (sometimes through human trafficking) or other reasons. This group would have been a “them” to me, but I was now part of it. I discovered that we are far more similar than different. And like the immigrants before us, we come in pursuit of freedom and a chance to realize our full potential.

Without legal status, I could not drive, work, or, at the time, attend university, even though I had graduated among the top of my high school class. For 11 years, my undocumented status loomed over every aspect of my life like a dark cloud. Then, in 2012 the Obama administration instituted DACA to protect undocumented immigrants like me who were brought to the U.S. as children.

President-elect Donald Trump has promised to terminate DACA upon assuming office. Immediate termination or letting DACA expire without renewal would take away temporary legal status and work authorization for me and my fellow 740,000-plus DACA recipients, also known as Dreamers, who did not have a say in coming to the U.S. as children and make us eligible for deportation. Many DACA recipients have known only America as home. Such an act not only would pull hundreds of thousands of us out of our jobs—as teachers, farmers, business owners, service providers, innovators, etc.—and out of the local economy, but also would separate many of us from our family members who are U.S. permanent legal residents and citizens.

This is not smart. It is not humane. And it is not American.

America was founded on the very truth that “all men are created equal, that they are endowed by their Creator with certain unalienable rights, that among these are Life, Liberty and the pursuit of Happiness.” The God-given dignity and worth of every human being also lie at the heart of the Christian faith. God loves everyone, but He is particularly attentive to the needs of the vulnerable and marginalized, including immigrants, and has repeatedly called His people to respond with justice and compassion.

While some evangelical voices may have been linked with anti-immigrant sentiments this political season, I do not believe this is a true representation of the Church nor an accurate reflection of Christ’s teachings (Matthew 25:31-46, among others). It was in my darkest days wrestling with my status that I experienced God’s love through His people most profoundly. My own youth pastor, upon finding out my immigration status, became actively involved in learning about the issue and advocating on my behalf in the church and in the public sphere. My own denomination, the Christian & Missionary Alliance, was founded when A.B. Simpson ministered to immigrants in New York City in the late 1800s, which was thought improper at the time. The Evangelical Immigration Table, a coalition of national Christian organizations and leaders and with which I’m working in the Midwest, consistently has advocated for immigrants and refugees. Immigration is not a political issue; it is a human issue, a biblical issue.

I attended Northwestern University after community college through generous support from the Jack Kent Cooke Foundation. Even though I came from a single-parent home, I did not qualify for any financial aid due to my status. After graduating college with honors, I still could not work legally until the implementation of Deferred Action for Childhood Arrivals in 2012, which temporarily deferred deportation for individuals who came to the U.S. as minors and who meet certain qualifications. With DACA, I could obtain my Social Security card, driver’s license and work authorization. This is what I, and many others like me, had simply wanted all along: not to have to hide in the shadows but to lead productive lives and give back to our communities.

National surveys, including exit polls from the November election, consistently find that most Americans, including many Trump voters, support immigration reform that includes a pathway toward earned legalized status. The nonpartisan Congressional Budget Office has estimated that passing comprehensive immigration reform that includes border security enhancements, visa updates and a pathway to earned legalized status would reduce the federal deficit by $200 billion in the first 10 years of implementation and $690 billion in the following 10 years. Congress, however, has thus far lacked the will to fix a broken, outdated immigration system to restore the rule of law and keep up with our market needs in the 21st century.

Congress needs to pass something akin to the DREAM Act to protect Dreamers whose status may soon expire under President Trump. A long-term bipartisan reform that addresses the broader immigration issue is also necessary. The time to speak up is now.

Undoubtedly, this is a period of great uncertainty and fear for many immigrant communities. Even so, I, along with many of my immigrant friends, choose to hope and choose to trust. We trust that the American people, who have always represented and defended this country’s values and principles, will not let their next president do that which is fundamentally un-American.

And for those of us of faith, we know our ultimate security lies in the hands of a just and compassionate God. 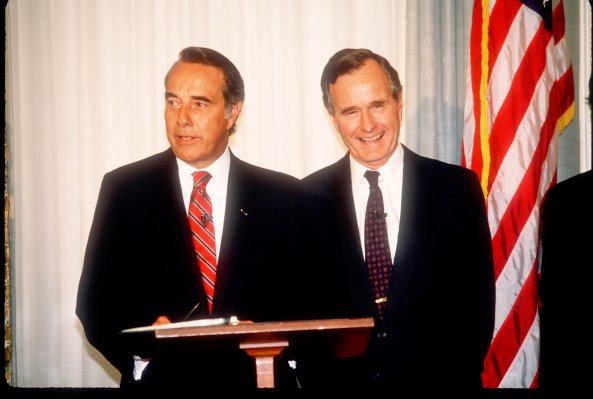 George H.W. Bush and Bob Dole Unite for Pearl Harbor at 75
Next Up: Editor's Pick