(CANNON BALL, N.D.) — Thousands of protesters in North Dakota celebrated the federal government’s ruling against a controversial pipeline project but girded for a protracted struggle as president-elect Donald Trump’s transition team said on Monday it supports the project and would review it after he takes office.

The company building the pipeline, Energy Transfer Partners, said late on Sunday that it had no plans to reroute the line, and expected to complete the project.

The U.S. Army Corps of Engineers said on Sunday it rejected an application for the Dakota Access Pipeline to tunnel under Lake Oahe, a reservoir formed by a dam on the Missouri River.

Native Americans and activists protesting the project have argued that the 1,172-mile (1,885-km)Dakota Access Pipeline would damage sacred lands and could contaminate the tribe’s water source.

Late on Sunday, Energy Transfer Partners said in a joint statement with its partner Sunoco Logistics Partners that it does not intend to reroute the line and called the Obama administration’s decision a “political action.”

Protesters at the Oceti Sakowin camp in Cannon Ball, North Dakota, turned upbeat after the Army Corps of Engineers announcement on Sunday but expressed trepidation that the celebration would be short-lived.

This is a temporary celebration. I think this is just a rest,” Charlotte Bad Cob, 30, of the Pine Ridge Reservation in South Dakota, said on Sunday. “With a new government it could turn and we could be at it again.”

The pipeline is complete except for a 1-mile (1.61 km)segment that was to run under Lake Oahe, which required permission from federal authorities.

The protest camp’s numbers swelled in recent days as hundreds of U.S. veterans joined the protesters.

Several veterans who recently arrived at the camp told Reuters that they thought Sunday’s decision was a tactic to get protesters to leave. They said they had no plans to leave because they anticipate heated opposition from Energy Transfer Partners (ETP) and the incoming administration.

“That drill is still on the drill pad. Until that’s gone, this is not over,” said veteran Matthew Crane, 32, from Buffalo, New York.

The U.S. Army Corps of Engineers said it would analyze possible alternate routes, but any other route also is likely to cross the Missouri River.

“When it comes to infrastructure development in Indian Country and with respect to treaty lands, we must strive to work together to reach decisions that reflect the multifaceted considerations of tribes,” he said.

North Dakota Congressman Kevin Cramer, a Republican who has advised Trump on energy policy, said the decision ignored the rule of law.

Tom Goldtooth, a member of the Lakota people from Minnesota and co-founder of Indigenous Environmental Network, said he expected Trump to try to reverse the decision.

“I think we’re going to be in this for the long haul. That’s what my fear is,” he said. 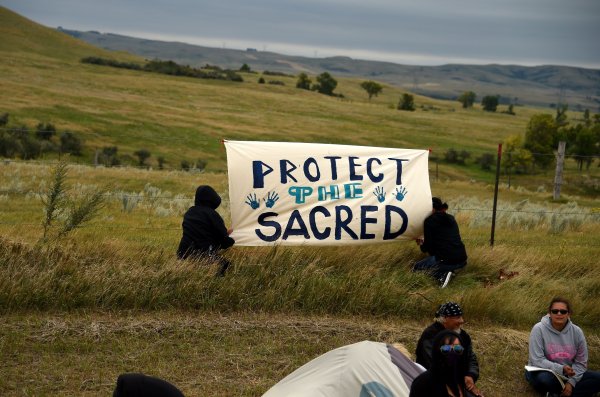