Donald Trump’s victory has strong resonance in one country thousands of miles away: France. Much like the White House, the Elysée Palace houses a president with major powers, including being the military commander in chief and having the ability to write national and foreign policy that is then often rubber-stamped by the National Assembly. What is more, there is already a populist rabble-rouser much like Trump, campaigning to seize the presidency in two rounds of elections next April and May: France’s far-right National Front leader Marine Le Pen.

Most polls suggest Le Pen will do extremely well, garnering at least one-quarter of votes in the first round, and more than that in the second round—though most pollsters think voters will hold their nose and vote for right-wing François Fillon, in order to shut her out. Much of Le Pen’s support will likely come from longtime Socialists, who are exasperated by their dismal prospects; just like the U.S., large swaths of rural, smalltown France have seen their factories gutted, their youth seemingly abandoned in the rush towards globalization. They are, in fact, the mirror image of Trump’s “forgotten people.”

That is just one aspect binding Le Pen to Trump; the two have both railed for years against “elitist media” that have dismissed their chances of being president. Both speak of blocking migration, cracking down on Islamists, building closer ties to Russia, ripping up trade deals like the European-U.S. agreement TTIP (which Le Pen likes to call TAFTA). And both hailed Brexit; Le Pen’s main campaign promise is to pull France out of the E.U.

It’s no surprise, then, that Le Pen has thrilled to Trump’s victory, which seems to validate her own long-shot chances; she talks about “when,” not “if,” she becomes French President. Indeed, her international affairs director Ludovic De Danne was inside Trump Tower on election night, as Trump’s guest. And Le Pen—tracking the returns in the middle of the night in France—tweeted her congratulations to Trump even before Hillary Clinton called him to concede. “If Clinton had won, the consequences for France would have been disastrous,” she tweeted on Nov. 20:

So what does Trump’s victory mean for Le Pen’s ability to win the French presidency next May? In an email exchange with Le Pen, TIME discussed her prospects in the Trump era, while Le Pen was stumping for votes on the French island territory of La Réunion :

TIME: Will Donald Trump be good for France?
Le Pen: Donald Trump presented for the French an infinitely less dangerous program than that of Hillary Clinton. The latter was bellicose, armed with bad intentions against Russia, and had troubling relationships with countries like Qatar or Saudi Arabia that contributed to the development of [ISIS]. It is in the interest of France that the United States and Russia speak to each other, and act in good faith against the scourge of terrorism in Syria, and contribute with our country to stabilizing a region where uncontrolled migrant flows begin today. We know the terrible consequences of these migrations in our European countries: Massive arrivals of illegal immigrants, explosion of asylum claims, often unfounded, and a definite increase in terrorist risks.

What else do you have in common with the President-elect?
We have both viewed with sympathy the sovereign decision of the British to leave the European Union and regain their sovereignty, a prerequisite for their prosperity and preservation of their identity ; We are both fighting the treaties aggravating free trade and wild globalization, in the mutual interest of our respective nations.

Have you contacted the President-elect?
We have mutual friends and I immediately congratulated the president-elect [on Twitter], but until now we have not established any special communication. I am obviously not opposed to the establishment of relations in the shared interest of our two nations. Our countries have been friends dating to the very existence of the United States. France is the only power that has never been at war with the United States. My objective.. is to do everything possible so that the relationship between these two admirals of the freedom of the world persists and flourishes. This will of course be my perspective when I become President of the French Republic.

Immediately after Mr. Trump’s victory, the National Front’s Vice President Florian Philippot tweeted: “Their world is collapsing, ours is being built.” What is ‘their’ world, and what is yours?
Obviously, after Brexit, the election of Donald Trump is a signal that the whole world must hear and understand. This election, which no one saw coming, represents a victory for the American people, which is a courageous people, on the political and media elites who wanted to dictate its conduct; In the same way that the British had succeeded in resisting the catastrophic sirens of the supporters of the European Union. In a way, the return of the people has apparently begun, against supporters of unbridled globalization which aggravates the inequalities within our Western nations. In our old [French] Republic too, our movement is progressing with every election, a sign that little by little people are deciding to take back power.

What do you say to people—after Brexit and Trump’s victory—to those who say it’s impossible for the National Front to win a French presidential election?
You know, I chose as the campaign logo a blue rose, which means “make possible the impossible.” I think the British with Brexit, then the Americans with the election of Donald Trump, did that: They made possible the impossible. They faced all the supporters of the established order, all the media and political powers who wanted nothing to change, wanted the world to continue working in the service of a few banks, a few multinationals… so that nations, these formidable spaces of solidarity, disappear little by little. The British and American peoples have spoken. And I think that the French people too can speak again today. The French people, like the others, want to regain their ability to take their destiny into their own hands. 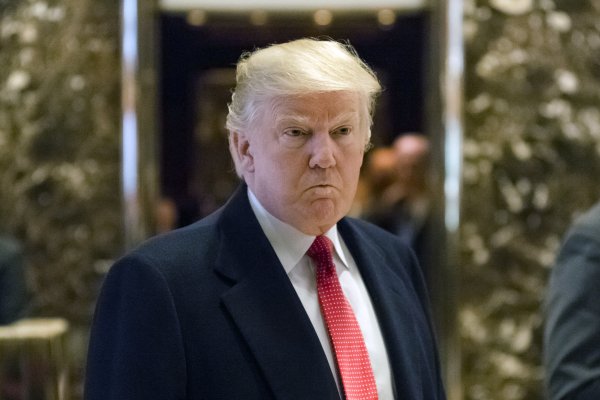