What to Know About Pizzagate, the Fake News Story With Real Consequences

A 28-year-old man was arrested on Sunday for allegedly walking into a Washington, D.C., pizza joint with an assault rifle, saying he wanted to investigate claims that the restaurant was running a pedophile ring from its basement with the help of Bill and Hillary Clinton.

Here’s everything to know about Pizzagate—the fake news story that has spun out of control, leading to trolling, protests and now an arrest:

The allegation, which is false, is that Hillary and Bill Clinton used the Comet Ping Pong pizza restaurant in Washington, D.C., as a front for a pedophile sex ring; the back room was supposedly used for kidnapping and trafficking children.

Pizzagate began after James Alefantis, the owner of Comet Ping Pong and a notable Democratic donor, was mentioned in Clinton campaign chairman John Podesta’s emails, released by WikiLeaks earlier this year. Alefantis, who had previously been in a relationship with David Brock, a Clinton ally, was potentially going to organize a fundraiser for Clinton’s campaign.

Members of the anonymous message board 4Chan, an Internet message board known as a gathering place for those with extreme beliefs and the place the conspiracy theory took hold, began to trawl Alefantis’ social media accounts, citing photos of children, basement construction and letters from Clinton as evidence of purported wrongdoing. Users claimed some words in Alefantis’ emails (for example, “pizza” and “cheese”) were code words for criminal activity.

Pizzagate quickly spread to other social media sites including Twitter and Reddit—where a thread called Pizzagate attracted thousands of subscribers (it has since been suspended). The story then began spreading on Facebook and nationalist and fake news websites, ultimately reaching foreign language sites as far away as Saudi Arabia.

Alefantis and his staff have received hundreds of death threats on social media (he’s since made his Instagram account private). He also received a direct message telling him his pizzeria should be “burned to the ground.” The District of Columbia Metropolitan Police Department said in a statement that it is “monitoring the situation and aware of general threats being made against this establishment,” Reuters reports.

Protesters also gathered outside the restaurant. In one encounter, they interrogated Alefantis and put the interview on YouTube. “I want to know why there’s a child in bondage [on your Instagram],” one protester said. “That’s my goddaughter, she’s playing with her sister,” he replied. “It’s a cute picture of them playing together. It was published on there 126 weeks ago.”

Edgar Maddison Welch, from Salisbury, N.C., was arrested on Sunday after he allegedly walked into the restaurant and pointed a gun in the direction of a restaurant employee, the Washington Post reports. Welch fired the rifle but the employee managed to escape and there were no injuries. Welch was charged with assault with a dangerous weapon.

Shortly afterward, Alefantis released a statement. “Comet Ping Pong is a beloved institution in Washington,” he wrote on Facebook. “What happened today demonstrates that promoting false and reckless conspiracy theories comes with consequences.” 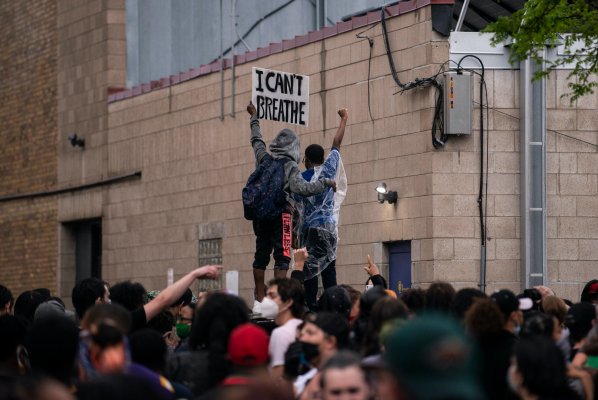