By Speaking to the President of Taiwan, Donald Trump Lays Down the Gauntlet to China

Without meaningful elections or freedom of speech or the press, China’s autocratic political system is designed to be predictable. Donald Trump is anything but.

On Friday, the U.S. President-elect broke with almost four decades of international protocol by speaking directly with the President of Taiwan, the island-state of 23 million that Beijing claims as a renegade province (though Taiwan in fact self-rules as a de facto sovereign nation).

The immediate response from China’s Foreign Minister was to decry a “trick” by Taiwan’s Beijing-skeptic new leadership. By Monday, editorials in China’s state media put the gaffe down to Trump’s “lack of proper understanding” of these “sensitive issues,” while warning that any “mishandling” of cross-strait relations was no laughing matter and “could lead to war.”

In 1979, Washington broke off relations with Taiwan to instead recognize the legitimacy of the People’s Republic, which was declared by Mao Zedong in 1949 after his Communist Party forced the U.S.-backed Kuomintang (KMT) government of “Generalissimo” Chiang Kai-shek to flee to Taiwan at the end of China’s civil war. But despite the lack of top-level contact since that time, Washington has remained supportive of Taiwan’s right to self-govern and is obliged by treaty to sell it arms. “Maintaining strong, unofficial relations with Taiwan is a major U.S. goal, in line with the U.S. desire to further peace and stability in Asia,” the State Department says.

Relations between Taipei and Beijing have meanwhile warmed considerably in recent years due to the 1992 Consensus on “one China.” Drawn up between Beijing and the KMT administration in Taipei at the time, it states that both China and Taiwan belong to the same nation, even if they differ on which government is the legitimate power. This act of diplomatic sophistry allowed trade to blossom and tourists to flock in both directions on direct flights.

Taiwan's President Tsai Ing-wen speaks on the phone with U.S. President-elect Donald Trump at her office in Taipei, in this handout photo made available Dec. 3, 2016
Handout—Reuters

However, Taiwan’s current President Tsai Ing-wen, who won a landslide in January, belongs to a political party that does not officially recognize “one China.” Formal independence from the mainland is listed as a goal in its founding charter.

Tsai has pragmatically stopped short of advocating this since running for Taiwan’s top job, yet she remains deeply distrusted in Beijing. The 60-year-old U.S.- and U.K.-educated lawyer campaigned on reducing Taiwan’s economic reliance on China and instead focusing on strengthening ties to East, South and Southeast Asia. In response, tourist numbers from China have dropped 27.2% year on year.

“Since Tsai took office, cross-straits relations have been tense,” says Zhu Songling, the director of the Institute of Taiwan Studies at Beijing Union University. “Beijing doesn’t like Tsai in many ways.”

That is unlikely to change following her historic phone call with Trump, which, according to some media reports, was deliberately planned as a provocation. “Of course both sides agreed ahead of time before making contact,” Alex Huang, a spokesman for Tsai, told Reuters.

According to Professor Lin Chong-pin, of Tamkang University in Taipei, most people in Taiwan were “overjoyed” that it happened. “It was a breakthrough,” he says. “However, the long-term implications actually hinge on domestic American politics.”

Trump made protectionist campaign promises of drawing down defense commitments, imposing import levies and safeguarding American jobs — with China frequently singled out as a source of economic malaise. However, Trump also vowed to add 90,000 more Army soldiers, 100 more Air Force fighters and create a 350-ship Navy — thus boosting military spending by an estimated $500 million. Given Trump’s frequent anti-China stump speeches, Beijing is now trying to gauge whether the new U.S. Administration will in fact be isolationist or the opposite.

“It’s pretty clear that Trump’s going to take a much harder line on China than anyone anticipated,” says Professor Nick Bisley, an Asia expert at Australia’s La Trobe University. “Trump will take a realpolitik view on American foreign policy and is putting down a marker to China on Taiwan.”

Certainly, Taiwan’s diplomatic limbo is unsatisfactory. The only democratic place in the Chinese world is unable to join the U.N. or potentially lucrative free trade blocs due to Beijing’s veto, and must compete in international sports events under the deeply unsatisfactory compromise name of “Chinese Taipei.” The U.S. does not have an Embassy in Taiwan — although it does maintains the American Institute, which serves a similar role.

Trump looks set to be far less sheepish about Washington’s relationship with Taipei. He was also unapologetic about his call with Tsai in a series of tweets, asking why the U.S. can sell Taiwan arms but their leaders cannot directly speak. (The U.S. sold $1.8 billion of weapons to Taiwan last year, down from a recent high of $6.5 billion in 2008, according to Chinese state media citing the U.S. Library of Congress.) He also called out China for building islands in the disputed South China Sea and, allegedly, for currency manipulation.

Needling Beijing may have serious consequences for the U.S. Bilateral trade was worth $558 billion in 2015, and China is the top holder of U.S. Treasury bonds, valued at $1.19 trillion.

But Taiwan is the most at risk of Beijing’s wrath — China is Taiwan’s top trading partner, accounting for about 40% of exports or some $130 billion per annum, according to Taipei. Moreover, China’s 2005 Anti-Secession Law codifies the use of force should Taiwan declare independence.

Trump may only be President-elect, and as such has been afforded some latitude by Beijing, but that will dissipate if this erratic streak continues when he enters the Oval Office. Taiwan may also deserve international recognition, but having Trump as a sponsor is a dalliance with the unknown. Says Bisley: “Trump’s is going to be a risky and ‘hold onto your hats’ approach to foreign policy.” 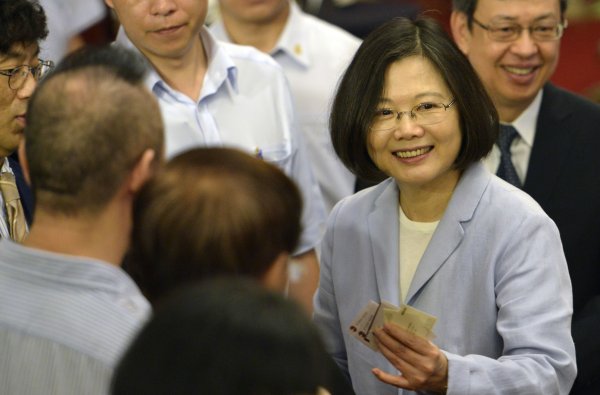 What to Know About Taiwan's President Tsai Ing-wen
Next Up: Editor's Pick