A general view of entrance gate of the Dachau concentration camp during a ceremony to commemorate the 70th anniversary of the liberation at the memorial site on the grounds of the former concentration camp on May 3, 2015 in Dachau, Germany.
Alexandra Beier—Getty Images
By Kate Samuelson

An iron gate with the infamous Nazi slogan ‘Arbeit Macht Frei’ (‘Work sets you free’) has been found in Norway two years after it was stolen from a former concentration camp at Dachau in southern Germany, police believe.

Around 40,000 people were murdered by the Nazis in Dachau before it was liberated by U.S. troops in 1945. It was one of the first concentration camps that Adolf Hitler installed in Germany and it was initially intended to hold political prisoners. The site, which is near Munich, is now a memorial.

The 200-pound gate was reported missing on Nov. 2 2014 and its theft caused global outrage. German Chancellor Angela Merkel described it as “appalling” and called for those responsible to be “caught quickly and held to account.”

Now police believe the gate has been recovered in the southwestern Norweigan city of Bergen thanks to an anonymous tip-off. According to the BBC, after reviewing photos, German police say it is “highly likely” to be the Dachau gate.

This is not the first time a sign reading ‘Arbeit Macht Frei’ has been stolen. In 2009, the iron sign bearing the same slogan above the entrance to the former Auschwitz death camp was stolen. Poland’s Chief Rabbi Michael Schudrich said that if the culprits were pranksters, “they’d have to be sick pranksters.” The sign was recovered in three pieces a few days later. 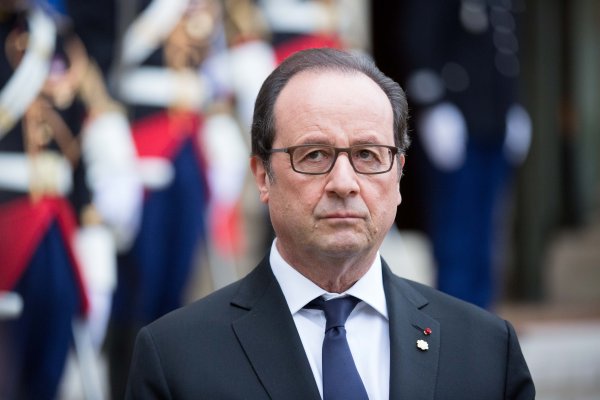 Why François Hollande Dropped Out of France's Presidential Race
Next Up: Editor's Pick