Polly Sheppard, left, and Felicia Sanders. The longtime friends, seen at Sanders’ Charleston home, both survived the massacre. The killer spared Sheppard at gunpoint so she would tell what happened.
Deana Lawson for TIME
By Maya Rhodan

Malcolm Graham sat in a crowded federal courtroom last week and watched as Dylann Roof, the man accused of killing Graham’s sister and eight other black parishioners in a Charleston church last year, commanded the attention of the room. Jury selection is underway in Roof’s murder trial, and at times Roof stood to speak to the judge or object to potential jurors. He “paraded around the courtroom,” Graham said. And that may have been just the beginning.

On Dec. 7, the trial against Roof—who faces 33 counts of murder, attempted murder and committing a hate crime that resulted in death—is expected to begin. Adding to the trauma of having to relive the deaths of their mothers, fathers, sisters and brothers, friends and fellow church members, the relatives of the Emanuel 9 last week got a glimpse of the rare occurrence of a man defending himself against the death penalty. While Roof initially sent mixed signals about his intentions—first dismissing his lawyers and saying he would represent himself, and then on Sunday reversing course and asking for his lawyers to represent him at the first phase of his trial—it’s already clear that he will be a strong presence at the proceedings.

“This nation will get an opportunity to see what racism looks like and sounds like,” said Graham, whose 54-year-old sister Cynthia Graham Hurd was killed in the church shooting. “It will be on full display.”

Roof asked U.S. District Judge Richard Gergel last month for permission to represent himself, a move Gergel agreed to last week but called “unwise.” Roof’s dismissed defense attorneys objected to their client’s decision, noting that he’s an untrained “22-year-old ninth grade dropout with a GED.” On Sunday, it appeared that Roof had changed his mind; he filed a handwritten note requesting representation for the first part of the trial, which will determine whether he is guilty. “I would like to ask if my lawyers can represent me for the guilt phase of the trial only,” Roof said in the motion filed on Sunday. “Can you let me have them back for the guilt phase, and them let me represent myself for the sentencing phase of the trial? If you would allow that, then that is what I would like to do.” On Monday, the judge ruled Roof can have his attorneys back and advised him to keep them throughout the sentencing phase of the trial.

Once the trial is underway, Graham, who works in Charlotte, N.C., as a consultant, plans to be in court every day. “I owe it to Cynthia,” he said. “I feel that I have a moral obligation to represent her in the courtroom. To ensure that he knows Cynthia’s family and friends are there to support her even in death.”

In a conversation with TIME about two months after the killings, Polly Sheppard, a retired nurse who survived the attack, even expressed interest in counseling Roof in some way. Felicia Sanders lost two family members, including her 26-year-old son, Tywanza, and her aunt, Susie Jackson, in the shooting, and was among the family members who stood before a judge less than 48 hours afterward and spoke directly to Roof. “We welcomed you Wednesday night in our bible study with open arms,” she said at the time. “You have killed some of the most beautifulest people that I know. Every fiber in my body hurts—I will never be the same.”

Neither Sheppard nor Sanders is deterred, said Andrew Savage, an attorney representing some of the victims’ families. “They look forward to being able to look him in the eye and show him that he doesn’t dominate their life,” he said.

Though federal prosecutors are seeking the death penalty, the families of the Charleston victims are divided. Some agree that death is a fitting punishment for a man who attacked a peaceful bible study, but Savage says his clients would prefer if Roof received life imprisonment without the possibility of parole. With death, he says, “the punishment for Roof comes to an end.” He would rather “let him think about what he did. Why he did it and think of Tywanza’s words.” Savage also worries that through the appeals process, hearings could drag out for years to come, and repeatedly reopen the survivors’ and victims’ families’ wounds. According to Michael Radelet, sociology professor and criminologist at the University of Colorado, it took an average of 19 years before those executed in the U.S. in 2016 were killed.

Roof would not have been the first high-profile defendant to do so. Convicted rapist and serial killer Ted Bundy served as his own counsel, and was executed via the electric chair in 1989. Radelet, a researcher and death penalty opponent who was involved in the Bundy trial, says it’s hard to say why Roof wanted to represent himself. According to USA Today, it appears that he disagrees with his attorneys about giving the jury access to a piece of evidence regarding his mental health. In doing so, however, Radelet says Roof ran the risk of making a mockery of the proceedings. “This is a trial that was already leading to this debate about whether the grief the trial would cause was worth the hassle,” he said. “And it’s a trial that now has the potential of turning into a circus.” Yet regardless of what happens, Radelet says, Roof’s fate is to die in prison: “The only question is how many years of misery he has to live through before he goes.”

Roof intended to spark a race war by killing nine black parishioners in a Charleston church. But instead of leading to more violence, Roof’s action’s created some remarkable acts of grace. Images of Roof holding a Confederate flag led the governor of South Carolina to call for its removal from the grounds of the state capitol. And few can forget the words of Nadine Collier, who told Roof just days after her mother was killed: “You hurt me. You hurt a lot of people, but I forgive you.” Collier didn’t speak for all of the families—she couldn’t—but the families’ and community’s collective reactions changed the course of history. And even with Roof acting as his own counsel, the trial, Graham believes, has the power to do the same.

“We owe it to those who were killed, no matter how hard the pain is, to endure the fury; to put racism on trial and try to alleviate it from our society. You don’t alleviate it by putting it in a corner. You have to kill it,” he said. “I could never put myself in the shoes of the survivors, but I think we owe it to Cynthia and the others to accept this burden to the very end.” 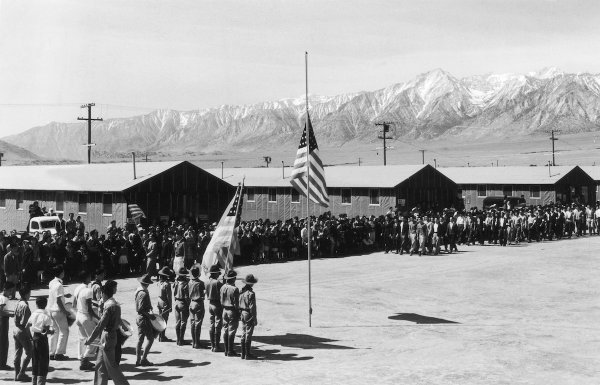 Why Citing the Japanese Internment as a ‘Precedent’ for a Muslim Registry Is So Alarming
Next Up: Editor's Pick