Why François Hollande Dropped Out of France's Presidential Race

By David Lees, University of Warwick / The Conversation Global

French president François Hollande made the shock announcement that he will not be standing for a second term in office.

The president seemed to acknowledge his poor chances of success in the 2017 presidential election when revealing his decision. He spoke of the threat posed by the far right and the republican candidate François Fillon and hinted that the lack of support behind him personally made his standing too much of a risk.

Hollande is the first president since 1958 to rule themselves out of a chance to prolong their stay in the Elysée Palace. But in a year of political turmoil perhaps this shouldn’t have come as quite such a surprise.

Elected on a platform of change in 2012, Hollande was perceived as a more normal candidate after the excesses of his predecessor Nicolas Sarkozy. But he failed to live up to expectations – so spectacularly, in fact, that he famously became the least popular president of the fifth republic.

Despite his successful same-sex marriage bill, Hollande faced major opposition to his proposed economic and employment reforms. Both projects prompted street protests on a scale not seen since Jacques Chirac’s efforts to change the French working week. He failed to either put more money into the pockets of French voters or deliver meaningful socialist changes to society.

Gérard Depardieu’s high-profile relocation to Russia in the face of a higher 75% rate of income tax at the start of Hollande’s tenure appeared to signal an attack on the wealthy. However, in reality, the socialist government has become increasingly pro-business.

Where did it all go wrong?

A combination of social, political and economic frailties have led to Hollande’s decision not to run.

Since the attacks on the offices of satirical magazine Charlie Hebdo in January 2015, France has witnessed several serious terrorist atrocities – not least the horrific events in Nice on the July 14 2016.

Although Hollande himself cannot be deemed responsible for these events, he is seen as failing to address the difficulties of integrating immigrants into French society, even pandering to the right in the wake of the attacks by suggesting people with dual nationality who are convicted of terrorism should be be stripped of their French citizenship. The lack of resources for anti-terror intelligence agencies also left Hollande and his government appearing out of their depth.

Economically, despite a fractional decline in the unemployment rate, Hollande has ultimately failed to lift France out of the economic gloom that has engulfed the nation since 2008 – and arguably long before.

Hollande also appeared increasingly out of touch with the social views of vast swathes of the French electorate. From fierce opposition to the Calais migrant camp to euroscepticism in the face of German-inspired austerity, the president dithered between a traditional left-wing defence of progressive values and an attempt to appease the shift to the right across France.

Like more or less every president before him, when the going got tough domestically, Hollande sought to shift the focus overseas, with notable interventions in Mali, Syria and Iraq. But there seemed little point in shouting about all that once Islamic State had used the interventions as justification for attacks in France.

A setback for the left

Ultimately, Hollande’s failure to deliver on meaningful change and to speak directly to his core electorate on the centre-left will be his legacy.

Socialist presidents in France must face the rampant divisions within the party, many of which stretch back long before the Mitterrand era, but this cannot be considered an excuse for Hollande’s failure to deliver change.

Instead, when France most needed a leader to stand up for the causes of working people Hollande was found badly lacking. In fact the only major uplift in his approval ratings came when his affair with the actress Julie Gayet was exposed. Even then, voters disliked his somewhat unpresidential use of a scooter to travel between his official residence and Gayet’s apartment.

Hollande’s decision to step aside leaves the door open for his more popular, more right-wing prime minister Manuel Valls to run in the socialist primaries in January. Hollande’s somewhat belated decision not to run – despite months of party pressure – leaves little time for the socialists to organise themselves. His habit of hesitation has tarnished his time in office and could now cost the left a place in the second round of the election ahead.

David Lees, is a Teaching Fellow in French Studies at University of Warwick 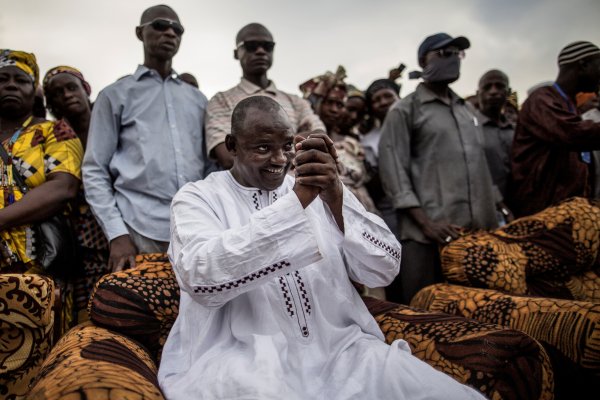 Gambia's President Loses Election After 22 Years in Power
Next Up: Editor's Pick