In the movie musical La La Land, out Dec. 9, Emma Stone plays starry-eyed Mia—an aspiring L.A. actress who’s constantly coming up short in demoralizing auditions. Alongside Ryan Gosling, a jazz musician still dreaming of his genre’s glory days, the two get swept up in a whirlwind romance. It’s not quite a storybook narrative, but it does involve plenty of song-and-dance numbers; luckily, Stone started filming right after a stint on Broadway in Cabaret, so she was in fine form.

The actress talked to TIME about the process of prepping for La La Land, and why this movie made sense to her—and might speak to all of us.

TIME: What drew you to this role? It’s not often that you see an original movie musical.

Emma Stone: It was the ambition of the project. What he [director Damien Chazelle] was going for was really exciting and enticing, because I love the originality of it and what it was paying homage to. It was really cool and interesting to be a part of, and equally scary—because if the tone wasn’t cohesive from the smaller scenes into these big cinemascope musical numbers, I didn’t know how it would turn out. But that’s also the most exciting thing—equal parts, “Who knows?” and “Let’s do it!”

Did you always plan on doing musicals?

Not particularly. I told myself when I was pretty young that I wasn’t going to be able to do musicals, even though I wanted to do them so badly. I did a lot of youth theater growing up and did musicals and took voice lessons and dance lessons, and I just wasn’t—I’m not a great, great singer, and I’m not a great, great dancer, so my dream has been to do musicals on Broadway, but [I thought] I just wouldn’t be able to do it—I didn’t have the stamina or the voice. The great thing about La La Land was that Damien was very adamant that even though he wanted people that had a bit of musical ability—that were able to dance and sing—it didn’t need to be technically perfect. I didn’t need to be Sutton Foster or Idina Menzel, who are my heroes, but who I’ll never be able to stack up next to.

Some of the songs are sung-through and filmed live—was that stressful?

I needed to stay silent for, like, days at a time before I could sing, so I was very focused on keeping it low key-for days ahead. That’s part of the fun of the challenge. My favorite part of Cabaret was doing that number at the end of every night—Sally standing onstage at the end spilling her guts out. In a way, [singing “Audition” live for La La Land] reminded me of that. It’s this moment where Mia finally cracks and is like, “F–k it, I’m a fool who dreams! This is who I am and this is all I’ve got after all that rejection.”

Did you see yourself in the character of Mia?

Of course. Being an auditioning actor at any time, you know that feeling of going in and giving it your all and it not working out. And there are periods of time when you feel like you’re delusional and need to give up.

What was it like working with Damien Chazelle, along with the music team [composer Justin Hurwitz and songwriting duo Benj Pasek and Justin Paul]?

They’re all so brilliant and so young. It felt like a very original and alive kind of atmosphere, making something like this with all of them. There was a lot of open discussion. It was also kind of fun because they really rewrote [the song] “Duet” from what they were originally were. As they were brainstorming, there was one weekend where Damien and Justin [Hurwitz] sent Ryan and I this clip of the two of them singing the new proposed lyrics over a piano, and it was Damien and Justin singing the song. It was, like, the cutest thing I’ve ever heard in my entire life.

La La Land was a huge hit at festivals. Why do you think early audiences have responded so well to it so far?

I think it’s just nice to see something that’s original and has joy in this way. It’s a two-hour escape, but it reminds you of the hope and importance of creativity, of still dreaming even when it feels like hope is gone. I think at a time like this, that’s a nice thing to be getting to talk about and putting out into the world. Hopefully, it can take people out and remind them of a deeper part of themselves—of heartbreak, and love, and how those things coexist in our lives. It’s nice to be talking about this film in the midst of things because of that nostalgia and sweetness and memory. That we can create new things all the time and there’s still a lot left to make that’s original and unique, no matter the state of the world. I hope people keep making things that are new and inspired in the way that Damien and the guys did. 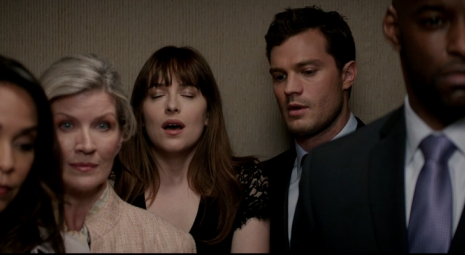 The New Fifty Shades Darker Trailer Gives Fans Exactly What They're Looking For
Next Up: Editor's Pick