Chimamanda Ngozi Adichie Continues to Be The Hero We Need

Acclaimed Nigerian author and feminist icon Chimamanda Ngozi Adichie, whose work was just referenced in Maria Grazia Chiuri’s debut collection for Dior, has long been an advocate for fashion and makeup. In an Elle.com interview Adichie spoke about her relationship to the fashion industry and why beauty and feminism are far from mutually exclusive.

Grazia is Dior’s first-ever female creative director, and she brought Adichie to sit in the front row for a show that included a shirt bearing the author’s famous words “We Should All Be Feminists.” Adichie said that despite her love of fashion, the politics of the industry had never particularly interested her – which is why she was “stunned” when she learned Dior had never had a woman at the helm before.

“Especially as Dior is iconic for a specific kind of female aesthetic,” Adichie told Elle.com. “Maria Grazia’s collection was very confident and felt very true, if that makes sense. It was the voice of a woman saying exactly what she wanted to say, and exactly how she wanted to say it, and I admired that enormously. And of course it helped that the clothes themselves were so beautiful; the dresses were ethereal and the jackets had a strong sort of grace – and that WSABF T-shirt wasn’t bad!”

Adichie also noted what a shame it is that women so often have to defend or validate their love of fashion and beauty, as if merely evincing an interest in either calls into question their substance and intellect. The broader patriarchal narrative there, of course, is that a woman who loves fashion and makeup is inherently a silly creature, too vapid or too vain or too girly – which is just a more derisive way of saying too feminine – to have any real substance.

It’s been just three years since Adichie delivered the viral TEDx Talk “We Should All Be Feminists” that made her a feminist darling, but it’s been over a decade since she began living the truth that a fully woke and self-actualized woman can also love fashion and lipstick. 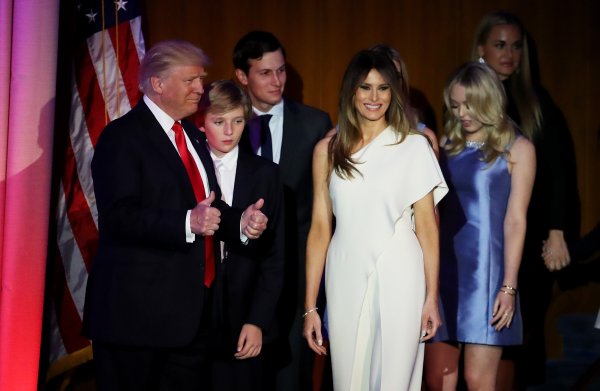 Tom Ford Declined to Dress Melania Trump Before the Election
Next Up: Editor's Pick