Colombia Signed a New Peace Agreement. Will It Stick?

A man holds a Colombian national flag with white stripes during a demo to demand the immediate endorsement of the new peace agreement between the Colombian government and the FARC guerrilla outside the Colombian Congress in Bogota, on November 30, 2016.
GUILLERMO LEGARIA—AFP/Getty Images
Ideas
By Fabio Andres Diaz, International Institute of Social Studies / The Conversation

When, after four years of negotiations between the Colombian government and FARC guerrillas, the Sept. 26 peace agreement was rejected by plebiscite, many feared that the promise of peace was lost for good.

But the government has eked out a second, renegotiated accord that was passed by the Senate in a marathon 13-hour session on November 29th.

President Juan Manuel Santos’ September agreement with the FARC was derailed by a successful disinformation campaign that accused him of surrendering Colombia to the guerrillas and turning it into a communist country.

Led by right-wing former president Alvaro Uribe, the opposition felt that the peace process had marginalized their agenda, which envisioned peace as the victor’s triumph rather than a compromise between factions. Santos’ low approval rating compounded the issue, as did the dense 297-page document, which citizens struggled to understand and verify.

The government used the rejection and resulting renegotiation period to broaden public support for peace and address the concerns of those wary of the agreement. This bodes well for Colombia’s new accord. So, too, does the fact that Uribe’s camp participated in the renegotiation, though the Uribistas nonetheless left the Senate during the approval vote.

The new agreement incorporates several changes that signal key compromises from both the FARC and the government.

Because the term “gender” was seen as a disguised attack on religion, the new agreement uses more precise language to specify that women and minority victims of the conflict must receive special attention. It also includes an explicit commitment to freedom of religion in Colombia (a tenet enshrined in the Constitution).One of the most contentious issues that drove some Colombians, in particular, Evangelical Christians, to vote no in October was the use of a “gender perspective”. Religious conservatives claimed that the accord incorporated a hidden pro-LGBTI agenda that would redefine sexual orientation and disenfranchise heterosexuals.

The new agreement addresses a set of critiques around responsibility, power and impunity in post-conflict Colombia – common challenges for countries implementing transitional justice, which must juggle justice with legitimacy, public support, reparations and peace-building.

In the accord, the length of the justice process set up to try war crimes is shortened, its implications on the Constitution are limited, and the FARC is obliged to help financially reimburse victims. Even Human Rights Watch, a controversial opponent of the first accord, has welcomed these changes.

Additionally, fears within the Army that the state was relinquishing its authority to FARC troops have dissipated as the government invested time in explaining the agreement and its implications for soldiers.

To alleviate concerns that a peace agreement with communists, as the FARC are, would erode the right of private ownership, the new agreement explicitly affirms the right to hold property and have land.

In an entirely new provision, FARC assets will help finance reparations and restitution for victims of the armed conflict. This is a significant achievement that emerged from the opposition to the initial agreement.

The illicit drug trade, which helped fuel the war in Colombia, was another source of disagreement in the original accord. The Uribistas demanded greater transparency from the FARC vis-a-vis their role in coca cultivation and cocaine trafficking. Now, all parties must provide “exhaustive and detailed information” on their relationship with drug production and sale. What this means in practice is not yet clear.

Finally, the initial accord was intended to be linked to the Colombian Constitution, almost like an amendment, guaranteeing that its commitments would be honoured. Because the opposition portrayed this strategy as under-the-radar constitutional reform, the new agreement will have much more limited constitutional implications.

Peace on the presidential campaign

Over the past month and a half, only one element of the FARC accord was not adapted, clarified or modified: allowing demilitarised FARC members to participate in politics. This signals clearly that the objective of Colombia’s peace process is, and shall remain, to transform an armed group into a political movement that channels its claims through the democratic system rather than with violence.

The critical compromises, increased citizen engagement and Congressional ratification should all facilitate approval and implementation of the new accord. Indeed, the leader of the negotiation team, Humberto de la Calle, has referred to it as the “best possible agreement”.

As this comment recognises, in the end, opposition has helped strengthen the country’s peace accord. Most of the concerns they voiced were valid and legitimate; not all “No” voters were, as “Yes” voters insisted, anti-peace.

Still, the Uribistas remain opposed to the accord, for reasons that remain vague. Several prominent opponents, including former presidential candidate Óscar Iván Zuluaga and former attorney general Alejandro Ordoñez, have proposed a referendum to dissolve Congress and reelect it from scratch. This extreme action would effectively disable the government from approving or implementing any accord.

Such recalcitrance has the feel of politicking. With parliamentary and presidential elections to be held in 2017 and 2018 respectively, many accuse the Uribistas of hijacking peace to support future campaigns. Indeed, both Zuluaga and Ordoñez are already seen as pre-candidates for the presidency.

And so, half a century since its civil war began and two months since the rejection of peace at plebiscite, Colombia keeps striving for a more peaceful future. In its human hopes, political setbacks and halting progress, it is a textbook example of a country transitioning from armed conflict, showing how peace can take root – or fail to – when a country fights against itself using the weapons both of war and of democracy. 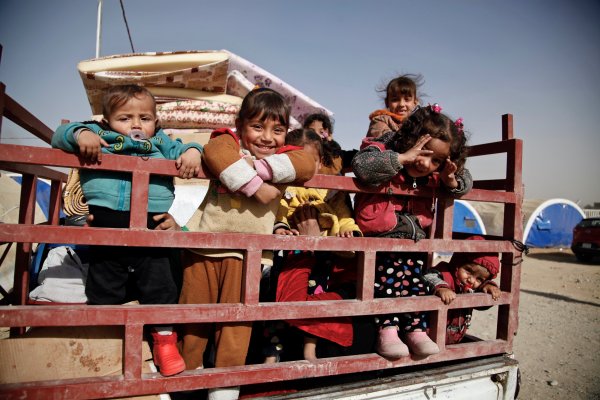 How to Save the Children of Mosul
Next Up: Editor's Pick