America Ferrera Completed a Triathlon to Overcome Her Insecurities

America Ferrera can now officially dub herself a triathlete, as well as being an Emmy award-winning actress. The journey to accomplishing the athletic feat didn’t come easily, however. In an essay for the New York Times, Ferrera opens up about quieting her inner critics that prevented her from enjoying her accomplishments and success.

Ferrera first decided to battle the negative voices in her head after winning a coveted Emmy in 2007 for Ugly Betty. Ferrera recalls that standing on stage accepting the award “should have been a moment of sublime celebration,” but that wasn’t the case. Instead, she thought to herself, “Who do you think you are? You don’t belong here. No one here thinks you deserve this. Hurry up and get off the stage.”

She settled on combatting the negativity by beginning therapy, where she “worked really hard to recognize and silence that nagging internal critic.” About a year ago, Ferrera explained that her friend was training for a triathlon, which left her “equal parts enthralled and horrified.” After her husband decided to participate in one as well, Ferrera was inspired to do the same. Upon her decision, the voices returned calling her “a procrastinator,” “the fat kid” and “the quitter,” but she began training regardless.

With the help of her trainer, Ferrera shut off the negative self-talk little by little. She writes, “It occurred to me then that if I really wanted to make it through this challenge, I needed to rewrite my inner dialogue,” which included singing Beyoncé to herself and writing new mantras for herself.

Her mentality changed when she “stopped thinking about training as a physical challenge,” and rather, a mental one. It was in this mindset where she “began to have a real conversation with my mean, scared voice.” And Ferrera won. She completed her triathlon. She Said, “For five months, I showed up to defend myself against a scared and angry voice. In the end, I didn’t eradicate her. But I had transformed her.”

Read the rest of her essay here. 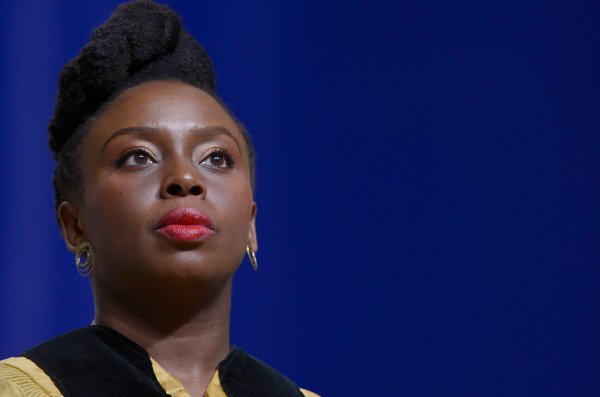 Chimamanda Ngozi Adichie Continues to Be The Hero We Need
Next Up: Editor's Pick