Ohio State University Attacker May Have Been Inspired by ISIS and Al Qaeda: FBI

The student who attacked a crowd at Ohio State University on Monday may have been inspired by ISIS and Anwar al-Awlaki, an al Qaeda-linked cleric who was killed in 2011, law enforcement officials said Wednesday.

Abdul Artan, a Somali immigrant who was shot and killed by a police officer Monday, injured 11 people after plowing a car over a curbside and then attacking people with a knife. Officials said during a Wednesday press conference that Artan had purchased a knife from a Walmart on Monday morning, but that they weren’t sure if it was the knife used in the attack.

Authorities had no knowledge of or contact with Artan prior to the attack and he was not the subject of any previous investigation, FBI special agent Angela Byers told reporters.

In Facebook posts that surfaced after the attack, Artan railed against U.S. interference in Muslim countries, and wrote, “If you want us Muslims to stop carrying lone wolf attacks, then make peace” with ISIS. Officials did not comment on the review of Artan’s Facebook during the conference.

This August 2016 image provided by TheLantern.com shows Abdul Razak Ali Artan in Columbus, Ohio. Authorities identified Abdul Razak Ali Artan as the Somali-born Ohio State University student who plowed his car into a group of pedestrians on campus and then got out and began stabbing people with a knife Monday, Nov. 28, 2016, before he was shot to death by an officer.
Kevin Stankiewicz—TheLantern.com/AP

An ISIS news agency claimed responsibility for the attack on Tuesday, claiming Artan “a soldier of the Islamic State.” Byers said officials are not jumping to conclusions about the validity of the claim.

“We believe he may have been inspired by Anwar al-Awlaki or ISIL, but they have been known to take credit for incidents like this when an assailant is deceased and cannot refute that,” she said. 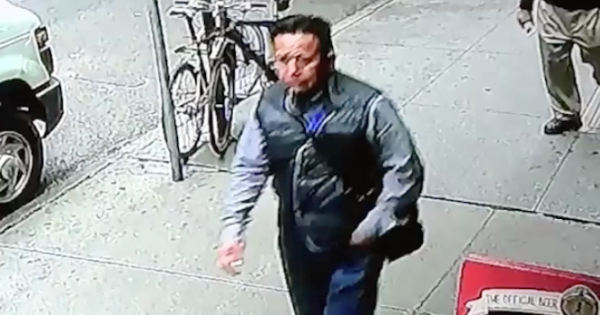 Watch a Man Casually Steal a $1.6 Million Bucket of Gold Flakes From a Truck
Next Up: Editor's Pick