People attend a mass in memoriam of the players of Brazilian team Chapecoense Real killed in a plane crash in the Colombian mountains, in Chapeco, in the southern Brazilian state of Santa Catarina, on November 29, 2016.
NELSON ALMEIDA—AFP/Getty Images
By TIME Staff

Businesses were closed across the grief-stricken Brazilian city of Chapecó on Tuesday as residents struggled to process the devastating tragedy that had befallen their beloved soccer team Chapecoense.

Almost every member of a team described as the “Cinderella story” of Brazilian soccer was killed when its chartered plane crashed in mountainous terrain near the Colombian city of Medellin late Monday local time, with the loss of 71 lives. The British Aerospace 146 jet was supposed to be carrying players to the game of their lives — the first leg of the finals of the Copa Sudamericana tournament — capping a fairytale rise to the top division of Brazilian soccer.

Instead, municipal officials in Chapecó — a city of 210,000 people in the southern Brazilian state of Santa Catarina — have cancelled all holiday season activities and declared 30 days of mourning, according to Wall Street Journal.

“It’s like the whole city has died,” one senior official reportedly said.

The Arena Condá stadium — where the team were next scheduled to play on Dec. 6 — has become a focal point for large numbers of grieving fans, clad in green team jerseys. “We can only cry, and try to understand what’s happening,” the Journal quoted a local business owner as saying.

Fans light candles in tribute to the players of Brazilian team Chapecoense Real killed in a plane crash in the Colombian mountains, at their football stadium in Chapeco, Santa Catarina, Brazil on November 29, 2016.
NELSON ALMEIDA—AFP/Getty Images

Brazil’s champion soccer team, Sao Paolo’s Palmeiras, has asked the Brazilian Football Confederation if its players can wear Chapecoense colors for the last match of the season, Associated Press reports. Other clubs reportedly said that they want to freely loan players to Chapecoense for the 2017 season.

Meanwhile, Brazil has declared three days of national mourning for victims of the crash.

President Michel Temer said Air Force planes would be deployed to help relatives of the victims to travel to Colombia and for the transfer of the bodies to Brazil, AP says. 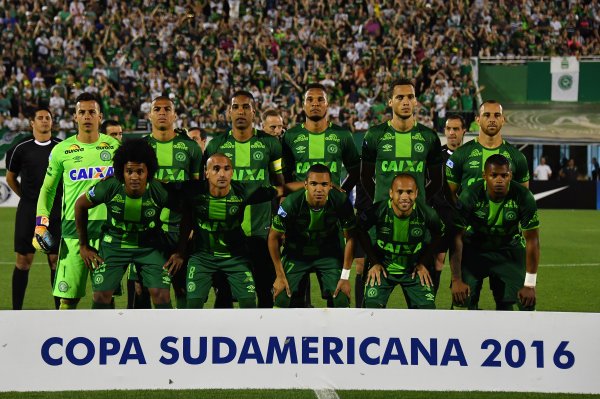 What to Know About the Soccer Team in the Colombian Plane Crash
Next Up: Editor's Pick