Americans like our right to free speech almost as much as we like debating what it means.

Donald Trump ignited fresh controversy last week when he tweeted that those who burn the American flag should be penalized — by possibly facing jail time or losing their citizenship (which wouldn’t be possible). He was likely responding to Hampshire College removing the American flag from campus after it was burned in protest of the election results.

In response to Trump’s comment, many took to Twitter to remind the President-elect that the U.S. Supreme Court has, in fact, twice protected the act of flag burning under the First Amendment.

In Texas v. Johnson in 1989, the Supreme Court ruled 5-4 that flag burning was a form of speech protected by the First Amendment, arguing that “if there is a bedrock principle underlying the First Amendment, it is that the Government may not prohibit the expression of an idea simply because society finds the idea itself offensive or disagreeable.” In response, Congress passed the Flag Protection Act of 1989. The following year, in United States v. Eichman, justices again ruled 5-4 that the act was unconstitutional.

As Harvard Law School professor and constitutional law expert Laurence Tribe noted on Twitter, conservative justices including Antonin Scalia and Anthony Kennedy were in the majority in both cases upholding the rights of Americans to burn the flag. In 2006 GOP Senate Majority Leader Mitch McConnell voted against a constitutional amendment to ban flag desecration. Trump himself agreed with David Letterman when Letterman said he thought flag burning represented freedom of expression during an appearance on “The Late Show” last year.

So, what’s going on?

Let’s set aside the fact for the moment that we’re responding to a 138-character exclamation that, like many of Trump’s tweets, may not wind up as policy. In the age of the Tweeter-(elect)-in-Chief, we’re going to have to get used to the topsy-turvy reality of one-off thoughts causing—at times frantic—reactions, policy discussions and uncertainty (and serving as constant reminders of what exactly our Constitution protects).

This is not about flag burning. This is about people.

The fact that Trump chose to make the loss of citizenship as a penalty highlights a larger theme of us vs. them that resonated throughout his presidential campaign. It seems to say: You’re either with Trump, or you’re against him, and if you’re against him, you’re fired. Would Trump have been against burning the American flag if Hillary Clinton had won the election and his supporters were the ones burning it?

This flag-burning episode is just one recent example of how our political biases can influence our views of basic rights like free speech. Since the election, these incidences have divided Americans along pro-Trump and anti-Trump lines.

Starbucks is at the heart of another similar controversy. In addition to the somewhat predictable winter drama of the holiday cup—some have called this year’s simple two-toned cup, devoid of winter-themed designs, a “war on Christmas“—there have been cases of people claiming that baristas refused to serve them because they wrote “Trump” on their cups and a viral video of a man yelling “Trump” at a barrista.

Tim Treadstone, who started a #TrumpCup campaign encouraging people to take selfies with Starbucks cups with “Trump” written on them, told the Washington Post:

In another example, Delta Airlines banned a passenger who screamed at “Hillary bitches” during a recent flight. “Donald Trump! It’s your president. Every goddamn one of you. If you don’t like it, too bad.”

And then there was the Michaels customer, who, in a now-viral video, went on a rant claiming that two African American employees discriminated against her when they encouraged her to purchase a reusable bag. She is heard saying: “And I voted for Trump, so what? You want to kick me out because of that? And guess who won? And guess who won?”

The reactions to the recent “not my president” protests around the country following the election are another case-in-point.

This is the same Trump who had previously encouraged the idea of a revolution after President Obama won in 2012. (He has since deleted those tweets.)

Delta (as well as other companies) is allowed to ban one of its customers from flying. In a statement, it apologized for the “disruption,” saying: “Our responsibility for ensuring all customers feel safe and comfortable with Delta includes requiring civil behavior from everyone.”

Is banning an unruly customer hampering said customer’s civil rights? No. As Breitbart has pointed out, “No one has a constitutional right to board a plane to travel.” (Though Breitbart was talking about the No-Fly List.)

It’s easy to support the First Amendment when you agree with the people exercising their right to free speech. And it’s easy to disagree when you don’t. But it’s much more difficult — and much more important — to support that right regardless of who it is and what they’re saying.

I pledged allegiance to the flag every morning inside an internment camp. I would never burn one, but I'd die to protect the right to do so. https://t.co/O5ecSQkyC2 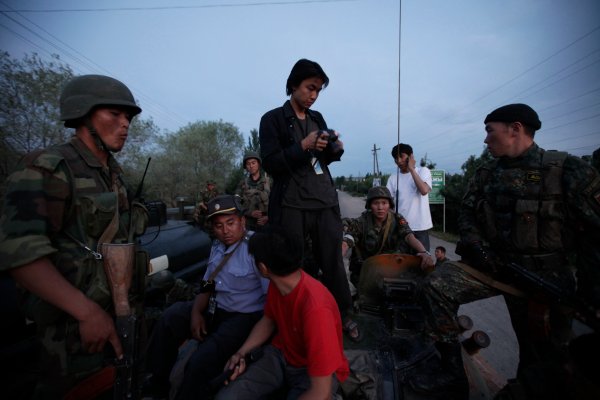 I’m a Journalist and I Was Stopped From Covering Standing Rock
Next Up: Editor's Pick