We know what President-elect Donald Trump says he’ll do in the “first 100 days.” But we know less of what we’re in for in the four or more years of Trump’s improv presidency. Here’s what should be done before the 2020 election to truly make America’s government great.

You’ve heard it before, but since Trump suddenly isn’t talking up this election promise anymore, don’t lose sight of it. America needs to graduate from indirect to direct democracy. The president should be directly elected by the people, not through an arcane intermediary called the Electoral College. States and districts are represented in Congress; they have no business interfering in the citizens’ selection of their president. If the College remains in place, make sure your state signs the National Popular Vote Interstate Compact that obligates delegates to pledge their votes to whoever wins the popular vote in their state. Let’s not have 2020 be a repeat of 2000 and 2016, where the winner of the popular vote (Al Gore in 2000 and Hillary Clinton in 2016) loses the election.

2. Create a streamlined and expert Cabinet.

There are many problems with the way the Cabinet is structured: it’s too big, members aren’t necessarily experts at what they do, and they work in silos rather than together. In other countries, such as Switzerland, the executive branch is called a “collective presidency,” a committee of seven elected leaders representing multiple parties and reaching consensus on major issues. They even rotate chairmanship each year. Seven heads are better than one. Given that Trump has never been in politics, a cabinet with real governance experience would be especially useful.

And since there is no mention of the Cabinet in the constitution, the president can construct it any way he chooses. Instead of just appointing friends or trying to construct a “team of rivals,” the cabinet should have doers and influencers from across government, including even sitting Congressmen. That way they have real skin in the game: they either work with Congress or take the blame together. Lastly, the cabinet should be trimmed down, merging bloated agencies to force cooperation on related issues: the Department of Transportation and Department of Housing and Urban Development could be combined into an Infrastructure Department; the departments of Energy, Agriculture and Interior, as well as the Environmental Protection Agency, should be fused into a Department of Energy and Environment; the Department of Commerce with the U.S. Trade Representative; Defense with Homeland Security; Education with Labor; and so on.

3. Replace the Senate with an Assembly of Governors.

In recent decades, the Senate has become nothing more than a smaller version of the House, a bastion of populism focused on filibusters and other arcane procedures—and of course fundraising for reelection. Indeed, in the past the Senate was largely composed of former Governors; now it is mostly former Congressmen.

It’s time to go back to a Senate that knows how to actually do something, and the best way to do that is to abolish it completely and replace it with an Assembly of Governors. America’s governors actually run their states, oversee large bureaucracies, manage complex budgets and understand local realities. Unlike squabbling senators, governors get along extremely well with each other and overwhelmingly favor cross-border projects that enhance their connectivity to each other. Rather than each state having two senators, it should have two governors—either running on a joint ticket or with the two most popular candidates being chosen. After the election, one will work in the state capital and the other in Washington coordinating priorities and agendas and sharing successful policies with their peers from other states. Especially since Senate rules have barely evolved in 200 years, this would at least ensure fewer filibusters and more actual policy.

There hasn’t been a meaningful amendment to the Constitution since the 26th amendment lowered the voting age to 18 in 1971. At the same time, we dare not touch the 2nd amendment two centuries after its intent was fulfilled: to protect state militias, not to enshrine individual rights to semi-automatic weapons.

Furthermore, conversations about the role of the Supreme Court today appear limited to wondering when its members will die and who will be president when they do. Smart governments like Germany don’t treat the constitution as a sacred Bible to be dogmatically obeyed but a living document able to adapt to the times. President Trump should (as Jimmy Carter did) appoint a diverse panel of lawmakers, lawyers and experts to make merit-based recommendations from which the president would choose as vacancies arise. Justices could serve for a single term of 10 years, ensuring a steady rotation of energy and ideas. Rather than just “taking the Fifth,” candidates would clearly articulate what amendments they feel are necessary to improve the Constitution’s relevance to society. The Court would not wait for the happenstance of case selection to take a view on the right to privacy or to decide on the role of technology in evidence collection. Instead, it would coordinate with foreign courts such as those of the E.U. to deal with big issues like privacy in the digital age rather than wait for corporate lawsuits. Finally, the Court could play a more active role with Congress in simplifying the stranglehold of excessive regulations that choke America’s small businesses.

5. Restore a strong federal service that knows how to run a country.

Part of the deep rot that undermines the effectiveness of both the executive and legislative branches is the gutting of America’s federal service. A century ago, the U.S. had legions of civil servants professionally managing the expansion of America’s railways and highways and creating “New Deal” bureaucracies such as the Social Security Administration. Today, it is an emasculated and fragmented workforce overseen by self-interested cronies and contractors.

And yet it is precisely in times of political gridlock that a professional civil service is needed most to get things done even if elected politicians do nothing. As in Singapore and China, America once again needs a permanently staffed federal service that brings all departments up to speed with the latest in data management and analytics. Crucial advisory bodies such as the National Security Council and Council of Economic Advisors in the White House, and Congressional Research Service, Government Accountability Office and Congressional Budget Office, should be beefed up as preparatory bodies to shape policy and legislation that serve the entire population while keeping it within the realm of the affordable and rational.

Having elected a political neophyte to the White House, Americans should now focus on building and institutionalizing competenc beyond the president as a way of graduating from personality politics towards a better system of government. Democracy has gotten us to where we are now—a bit more technocracy could ensure America’s best days aren’t behind it.

Adapted from Parag Khanna’s new book, Technocracy in America: Rise of the Info-State. 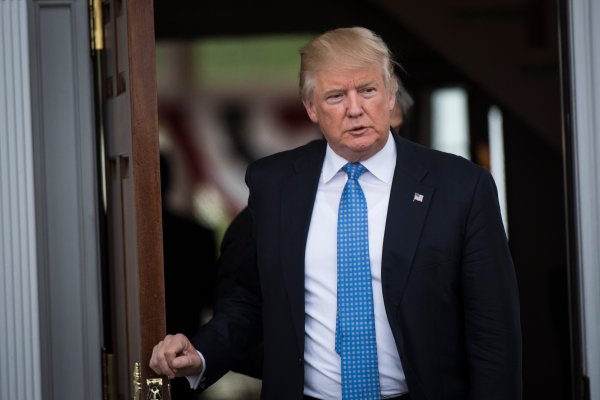 Donald Trump's Call With Pakistan Was a Hypocritical Mess
Next Up: Editor's Pick