Local and State Government Can Protect the Constitution From Trump

President-elect Donald Trump walks through the lobby of the New York Times following a meeting with editors at the paper in New York City on Nov. 22, 2016.
Spencer Platt—Getty Images
Ideas
By Corey Brettschneider

Brettschneider is a professor of political science at Brown University

A man who threatened to create a deportation force that would invade private homes without due process, shut down mosques, torture the families of suspected terrorists, “open up” the libel laws and revoke the citizenship of people exercising their right to free speech has been elected president of the United States. He will take an oath to uphold the same Constitution that he repeatedly pledged to violate.

For those committed to resisting his policies, a rethinking of federalism — the idea that the states and other localities retain sovereign powers and that the federal government, including Congress and the president, is limited in what it can do — might be the most effective tool, especially if other constitutional checks fail.

The separation of powers at the federal level might be of help if a few Republican Senators stand up for constitutional rights, but it is also likely that the Republican Congress will support him.

The federal courts might strike down presidential actions as unconstitutional, but court cases often take time, and eventually, with a potential record number of vacancies to fill, President Trump will have a role in reshaping the judiciary. It’s possible that all three branches of the federal government could be populated with Trump supporters. The system of checks and balances that were designed to be a safeguard against government abuse would be neutralized.

What can be done to resist unconstitutional policies enacted into law by President Trump and his Congress, and upheld by his Supreme Court?

Constitutional resistance can and should come at the state level. California has already signaled its readiness to resist unconstitutional federal action. Assembly Speaker Anthony Rendon and Senate President Pro Tem Kevin de Leon stated recently: “We will lead the resistance to any effort that would shred our social fabric or our Constitution.” The governor, Jerry Brown, reiterated this commitment to fight unconstitutional actions.

Cities have also taken up the mantle of local resistance to unconstitutional federal action. The mayors of New York City and Providence have suggested that they will refuse to implement or cooperate with the federal government in unconstitutional policy.

These statements of constitutional resistance speak to a new strategy of federalism in which localities seek to revive a lost constitutional role in undoing federal violations of fundamental rights. State officials have a role to play. Democrats and independents hold at least 19 governors’ offices and about one-third of state legislatures, as vote counting is still underway. Moreover, some Republican state officials are part of the never-Trump movement that sought to protect the Constitution against potential tyranny. They should take up the mantle of states’ rights to resist tyrannical policies and to protect individual liberty.

Of course, there is an ugly history to the phrase “states’ rights.” In the era of segregation, states’ rights were used to resist civil rights laws. But earlier in our history there existed a nobler tradition for states’ rights, one in which the state governments of the 18th and 19th Centuries fought to defend individual rights.

During the John Adams Administration, James Madison and Thomas Jefferson sought to invalidate the Alien and Sedition acts, which imposed limits on free speech. Those laws were aimed at suppressing the political opponents of the reigning party, the Federalists, who controlled all three branches of the federal government. As president, Adams signed these laws that were passed by his own party. The opposition party, Democrat-Republicans, could not go to the Supreme Court to strike it down because there was no developed First Amendment case law. That branch too was also dominated by Federalist appointments.

Denied any possibility of “checks and balances” at the federal level, Madison and Jefferson argued that laws punishing criticism of the President were unconstitutional. In the Virginia and Kentucky Resolutions, they called on states to refuse to participate in the prosecution of dissidents called for by these laws.

Their strategy of constitutional resistance at the state level was later co-opted by John C. Calhoun in his fight to preserve slavery, but it has also been used to combat slavery. In the 19th Century, the federal government relied on the Fugitive Slave Act to aid slave owners to capture fugitive slaves who found refuge in free territories and states. The citizens of Wisconsin—led by a newspaper editor, Sherman Booth, and with the aid of local public officials—resisted the law. They believed the Fugitive Slave Act violated higher constitutional ideals. Booth outwitted a slave-catcher hired by the federal government, freed the slave, and aided him in escaping to Canada. The Wisconsin Supreme Court sided with the Booth and the escaped slave, ruling the Fugitive Slave Act unconstitutional.

Perhaps Trump may abandon his unconstitutional policies, but if he does not, citizens should leverage the sovereign authority of the states to resist him. We must call on our state officials to resist. Governors should not cooperate in any unconstitutional executive actions. If Trump does form a deportation force, state officials should refuse to turn over documents and other records. If Trump threatens to limit press freedoms, state officials and citizens must speak out against him. If he threatens to shut down mosques or creates a registry of Muslims, violating the Free Exercise Clause, state officials should refuse to allow local law enforcement to cooperate or to aid them.

The 10th Amendment reserves to the states those powers not given to the federal government. States and cities are equally empowered by the 10th Amendment to assert their reserved authority to resist federal transgressions of constitutional limits. The Supreme Court has repeatedly emphasized that the federal government cannot “commandeer” state and local officials to do its bidding. Even if the Supreme Court refuses to confront Trump’s unconstitutional policies by asserting the importance of civil liberties, it could still recognize the right of states and localities to exercise their powers.

I’m not advocating a radical “states’ rights” movement. Instead, focusing on features core to our constitution’s system, my proposal is the antithesis of the call for secession by advocates of the so-called “calexit” movement who want to see California leave the union.

My aim is not to give states a procedural veto power over federal legislation. Instead, I rely on the idea that state officials have a constitutional duty to uphold the constitution, as stated in Article VI, and to resist any attempt to get them to comply in a violation of constitutional rights. These rights are independent of the federal government’s interpretation of them. When they are violated state officials might be a final resort in their defense. This spirit is captured in the Virginia resolution, suggesting that states “have the right, and are in duty bound, to interpose, for arresting the progress of the evil, and for maintaining, within their respective limits, the authorities, rights and liberties, appertaining to them.”

Moreover, as Yale Law Professor Heather Gerken and University of Virginia Law Professor Richard Schragger have both argued in the context of gay rights, local protections of rights do not reject a role of the federal government. Instead, they enforce the federal Constitution—rightly aiming at eventual vindication at the federal level.

The idea of states’ rights federalism was once used by segregationists to resist civil rights, but it is the key to protecting our liberties against unconstitutional federal policy. The 10th Amendment must be restored to its earlier and nobler tradition. It is a gift the Founders left us to fight potential federal tyranny. 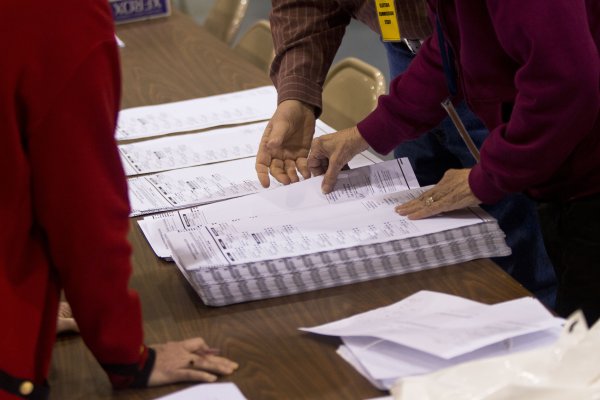 How the Wisconsin Recount Could Help Fix American Elections
Next Up: Editor's Pick