What to Know About Italy's Constitutional Referendum

Italians will vote in a crucial constitutional referendum on Dec. 4, where they have to choose between backing Prime Minister Matteo Renzi’s political reforms, or opening the door to instability in one of Europe‘s largest economies.

Here’s what you need to know about the plebiscite that Renzi has bet his premiership on:

What are Italians voting on?
A package of constitutional reforms which Renzi says will make the country more governable. Italy’s two legislative chambers— the Senate and the Chamber of Deputies— currently have perfectly equal powers. This means bills can bounce back and forth between them for months and sometimes years until they are finally approved in identical form. The system was created after the war in reaction to the fascist dictatorship of Benito Mussolini, but today the Senate’s sway over legislation is blamed for the country’s time-consuming decision-making process.

The constitutional changes being voted on will strip the Senate of many of its legislative powers by reducing the number of senators to 100 from 315, of which five will be appointed by the president and 95 will be appointed (rather than elected) by regional bodies. Another change is the clawback of decision-making powers from Italy’s 20 regional governments to the central government. This will strengthen executive power, Renzi argues, finally freeing up Italy’s government to work on reviving its moribund economy.

Why is it so significant ?
Renzi says he will step down if he does not win this Sunday’s referendum. If he does, a caretaker government would likely take over until early elections, which could clear the way for the populist, center left Five Star Movement to get a foothold in government, perhaps in alliance with the Euroskeptic, far-right Northern League. The fear is that these anti-establishment parties could call for a referendum on whether Italy should leave the euro.

The other fear is market turmoil if Renzi’s changes are rejected. Recession-hit Italian banks need to raise at least $21 billion in capital in the coming months to cover losses, Reuters reports, and the country’s debts are running at 133% of GDP. Further volatility could frighten investors and savers, and push it into a financial crisis — officials and senior bankers have told a variety of media outlets that eight of Italy’s cash-strapped banks could fail in light of a “no” vote. Coming so soon after Brexit, this could be a significant nail in the coffin of the European project.

Who is against it?
Detractors are worried that Renzi’s reforms will give Prime Ministers too much power. The Economist has argued that a nominated Senate would likely be filled by crooked politicians from corrupt regions and municipalities. Renzi has also passed an electoral law that guarantees the largest party 54% of the seats in the Chamber of Deputies. This means that a weakened Senate and majority in the lower house will give the premier almost unlimited executive power. Even the former, and controversial, Prime Minister Silvio Berlusconi has warned that the changes would “lead us straight toward a non-democracy.”

As well as spying an opportunity to win power, the populist Five Star movement says the center-left prime minister is attempting do away with the country’s systems of checks and balances. Five Star— founded by comedian Beppe Grillo— started an “I Say No” tour, imploring Italians to reject the changes.

According to the Guardian, Five Star politician Alessandro Di Battista, told a rally that the referendum was the latest ploy by the insulated political class: “This unelected senate will be constituted by the arselickers of the various parties…the election of Donald Trump is the American people’s business,” he said, the Guardian reports. “and by those who are in trouble with the courts and need parliamentary immunity. They’re sealing the system off so it can’t be changed in the future.”

Who is ahead in the polls?
Final polls before Sunday’s referendum are predicting Renzi’s defeat, indicating a 53.5% to 46.5% for “no” — though many are undecided, and few think polls are to be trusted after the Brexit and Trump shocks. However, populist revolts have swept through the West this year and Renzi’s referendum, quite like U.K. Prime Minister David Cameron’s ‘Brexit’ moment, might have given Italians a perfect platform to rebel against political elites. 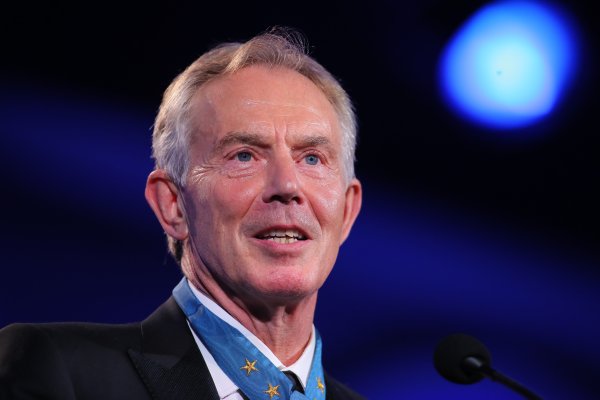 Tony Blair Takes on Populists with New Policy Unit
Next Up: Editor's Pick