A Brief History of Aviation Disasters in Sport

Local reports say that there were six survivors — including Alan Ruschel, the Chapecoense goalkeeper — but police fear that 75 passengers died in the crash.

The Medellin tragedy is the most recent in a succession of airborne disasters to have befallen the sporting world.

Every February to this day, fans congregate near Old Trafford, Manchester — home to one of the world’s best known soccer teams — to commemorate the anniversary of the Munich Air Disaster.

An accident while the team’s plane was refueling in Munich, on the way back from a European Cup match against Red Star Belgrade, led to the death of 23 people, including eight members of Matt Busby’s famous young team, known as the Busby Babes.

The team was returning from a game at East Carolina University when its chartered jet clipped a stand of trees and crashed into the hillside near the Tri-State Airport in Kenova, West Virginia, killing all 75 passengers on board.

When this Uruguayan rugby team’s plane crash landed in the Andes Mountain, over a quarter of its 45 passengers were killed on impact. Some of the survivors died of exposure soon after — a further eight were killed in an avalanche.

The remaining 14 starved passengers resorted to cannibalizing their dead teammates to endure a further two more months on the mountainside.

Their story became the subject of the 1993 survival biography, Alive.

Cuba’s National Fencing team earned a brace of medals at the 1976 Pan American games in Caracas, Venezuela, and were homeward bound when two bombs exploded on their aircraft mid-flight.

All 73 people on board, including 24 members of the fencing team, died when the plane crashed near the Barbados Coast. Declassified U.S. documents later showed that the man suspected of perpetrating the attack, Luis Posada Carriles, had worked for the CIA.

In 1993, the Zambian National Soccer Team was one of the best teams in Africa. They were poised to win the African Cup of Nations and secure their place in the World Cup for the first time ever — but they never reached their potential.

On the team’s outbound journey to a qualification game in Senegal, an engine defect was reported to have downed their plane after it had refueled in Libreville. It crashed into the Atlantic, killing all 30 passengers aboard.

Correction: The original version of this story misstated the name of the school whose football team was killed in a 1970 plane crash. It was Marshall University. 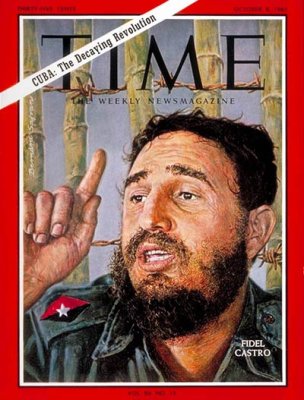 See Every Fidel Castro Appearance on the Cover of TIME
Next Up: Editor's Pick