This Wildly Inspired Elf on the Shelf Will Blow Your Mind

Every Christmas season, kids around the country delight to find their favorite Elf on the Shelf in different locations each morning. But one household takes the cake for most creative elf placement: In San Francisco, Michele Bell crafts elaborate scenes for her Alfie doll that span everything from current events to pop culture puns.

Armed with a cadre of Barbie dolls and plenty of felt, Bell dreams up complicated scenarios each night from Thanksgiving to Christmas for her children to discover when they wake up — and for fans to discover when they check her Instagram. This season’s dioramas include depictions of Alfie catching Pokémon (immediately recognizable to her kids, aged 5, 8 and 10) and visiting Cuba in honor of Fidel Castro (which required some explanation).

“The kids really, really love it,” Bell tells TIME. Typically she comes up with the scene the night before, often reacting to the news. If ideas come to her during the year, she says, she’ll write them on a list “almost like insurance. But I rarely use it.”

One scene last week involved some unpacking: Alfie appeared in a green Masters jacket as Arnold Palmer, standing between Ice-T and Beyoncé in a Lemonade costume. “My daughter said, ‘Oh look, I think it’s Donald Trump and Melania and Obama,'” Bell says. “I said, ‘What’s my favorite drink? I always drink it, especially in the summer, what do you get when you mix lemonade and iced tea together?’ And she’s like, ‘A margarita?'” Eventually, her 10-year-old — who still believes in the magic of Alfie — understood the recipe.

Bell actually created the first Alfie scene of 2016 over the summer — a tradition she’s carried out every June 25th, the halfway point between each Christmas. Her kids accidentally stumbled upon the doll’s storage spot one year and she invented an excuse for why he was visiting that day. This year, she showed Alfie in the act of Brexiting.

To kick off the holiday season proper, Bell created a tableau of a community under the phrase “Do all the good you can,” with Alfie appearing in a pantsuit beside Hillary Clinton. “This election, as probably almost everybody in this country will admit, was a tough one no matter which way you look at it,” she says. “For our family we wanted Hillary to win, and it was actually my daughter’s birthday November 9th, and she was crying. It was just a rough go. We live in San Francisco, and nine out of 10 people voted for her here. I didn’t want to get political, but I also thought I needed to somehow react to it.”

“That was my way of saying it doesn’t really matter who won actually, but the best thing we can do is be good to each other,” Bell says. “I really do feel like that’s the whole spirit of the season.” 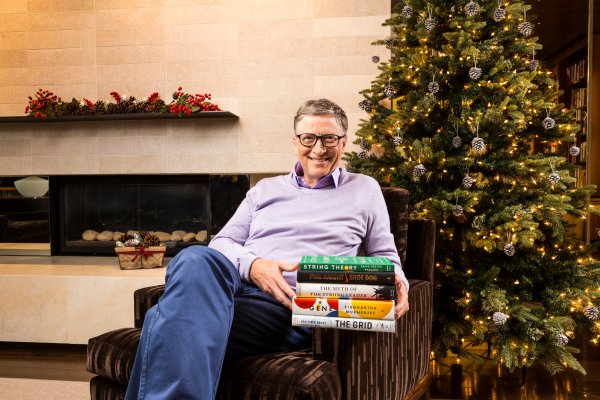 Bill Gates Picked These Books as the Best of 2016
Next Up: Editor's Pick