Women Are the Backbone of the Standing Rock Movement

I was sitting in a coffee shop in Tegucigalpa, Honduras, the night it hit me: I had to go to Standing Rock to document all sides of the ongoing Dakota Access Pipeline fight. This has happened before, a film choosing me, rather than me choosing it. Also familiar was what happened just four days later when I arrived at Standing Rock and realized that the story I had set out to investigate wasn’t the one that needed to be told.

The first person I contacted was Pearl Daniel-Means, whose Lakota name is Iyoyanbya Izanzan Win, or “Bright Light.” That’s what Pearl has been in my life since 2012, when I had the honor of interviewing her and her husband, the American Indian activist Russell Means, shortly before his death. During the interview, Pearl was visibly grieving, and yet seemed to possess incredible strength.

When we reconnected at Standing Rock in September, I was in the midst of my own grief. I had recently lost a baby in a second-trimester miscarriage. Shortly thereafter, I lost my relationship with her father. Lately, I’ve been doing a lot of thinking about what it means to be a strong woman.

By the end of my first shoot day, I had captured several compelling interviews. Only one was with a man. As it turns out, women are the backbone of the movement.

The women of Standing Rock are willing to risk their lives to stop the pipeline construction that desecrated their ancient burial and prayer sites and threatens their land, water, and very existence. They exemplify what it means to be an authentically empowered woman in the matrilineal way of being. Here is what I’ve learned from them so far:

1. A woman’s strength is motivated by a desire to serve the greater good.

Mitákuye Oyás’iŋ means “all are my relatives” in the Lakota language. More than a phrase, it is a guiding principle for living that extends to all beings. This includes the land and waters, both of which are feminine in nature.

“Unci Maka is Mother Earth,” explained a 37-year-old mother of four. “The land is not a resource. It is an entity that you have a relationship with and you respect, like your grandmother, mother, and aunts. We have to be good stewards. We have to take care of the land. We have to feed her and offer her prayers. In return, we are blessed with good health. Everything comes full circle.”

Our enemies are also our relatives. One afternoon, I witnessed an exchange between an elder and a young cook who had cursed the pipeline executives. “We must be peaceful in action, thought, and word,” the elder chided. “You have lowered your vibration with your words. You dishonored Mother Earth and the bounty that came from her. You lowered the vibration of the opposition. Standing in peace is standing strong.”

I asked one of the organizers how, after nearly 525 years of oppression, the 300 tribal nations represented at the camp could believe that peace will prevail. “For better or worse, we are optimistic people,” she replied matter-of-factly. “Hatred serves no one. Peace serves everyone.”

At Standing Rock, service can be literal, as is the case for the women who prepare and serve food to thousands at the camp each day. Washing dishes, caring for the children, or readying the warriors for their marches may be seen through

Westernized eyes as subservient. Here, these acts are performed with honor. As one of the women explained, “We have been gifted with the innate ability to care for those around us. Men must be taught how to nurture.”

2. A woman’s strength is executed with a balance of gentleness and fierceness.

“Women are the protectors of the water and of all life. Men are our defenders,” explained Pearl.

“We are taught to walk with gentleness,” added a young Lakota woman who braves mace, tear gas, and rubber bullets on the protest’s front line. “We are spiritually grounded people. We believe our ultimate weapon is prayer. And we’re peaceful, prayerful people. But it has come to a point where enough is enough.”

This, I was told, does not mean that women should emulate men.

In interview after interview, the women of Standing Rock said that we are at the end of the patriarchal era of competition, aggression, and force. As Pearl explained, we are now in a new era called the Fifth World by the indigenous peoples of North America. “It’s a refined, heightened energy. That energy resonates with the highest frequency, which is love. Compassion. Nurturing.”

One morning, a 14-year-old girl asked those sitting before the sacred fire to reflect upon the trauma that may have occurred in the lives of the pipeline security guards who attacked members of the camp with dogs and pepper spray. “Something painful must have happened to them as children. Maybe they didn’t have loving parents,” she said. “Maybe they were abused. They need kindness. I ask you to forgive them.”

When is the last time you saw the tough guy or girl in a movie depicted as kind or forgiving? In today’s world, these traits are all too often deemed “weak”. The women of Standing Rock remind us that strength can be subtle or forceful, and that both are necessary. “We act not only from the intellect, but also from the heart,” said Pearl. “This is true power.”

3. A woman’s strength is sustained by a sense of responsibility.

The women of Standing Rock believe that humankind’s right to existence comes with responsibilities to everything else in creation. Their vow to protect Mother Earth and all her inhabitants is their responsibility to the ancestors, and to the seven generations to come.

Many of us in the non-indigenous world don’t know the names of our great-grandparents, much less the sacrifices they made for us. Many decisions are made without any consideration for the future. How different would the world be if this were not the case?

“There are prophecies about how our generation is going to revitalize our culture and our people, and carry our people’s struggles on our backs. Not in a hard way, but in a beautiful way,” shared a 26-year-old graduate student and activist. “We have a responsibility to keep fighting. This struggle is very real. And if we don’t keep struggling, we’re going to suffer as a human race. Not just as indigenous people. All human beings are going to suffer if we don’t change the way we view the world and the way we have relationships with all life.”

Something Pearl said during our 2012 interview has stayed with me: “The hope lies with the women.” The more time I spend with the women of Standing Rock, the more I see that Pearl was right. I admire the strength of these women, who even in the face of adversity and devastation, care for themselves, their families, their communities, their nations, and the earth on which we all depend. Because of them, I have greater hope for the future. I’m calling this documentary End of the Line: The Women of Standing Rock. Theirs is the story that the world must see.

Shannon Kring is a contributor from the United States. This piece was originally published on World Pulse. Sign up to get international stories of women leading social change delivered to your inbox every month here. 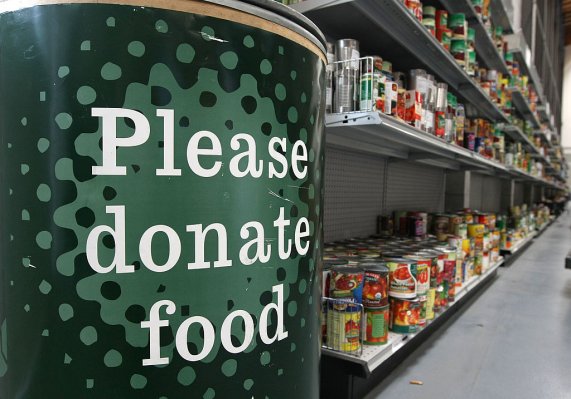 Why Food Banks Should Reject Junk Food
Next Up: Editor's Pick