What America Can Learn From Nigeria's History of Resistance

It is the dead of night here in Nigeria and I am looking at the situation in the U.S. following the election of Donald Trump. I am reading about the hate speech and the actions and reactions of the American people after the announcement of his victory. I am remembering once upon a time in the history of Nigeria when an unpopular ruler came to power.

It was the ‘90s and his name was General Sani Abacha. He was fear personified—an embodiment of what nobody wanted. His reign was dumped on our shoulders, forced upon us in a military coup.

I am not bringing up Abacha now to compare him to Mr. Trump. Our late president was cruel and a killer. You cannot compare the two men. I think of Abacha now because of how we, as Nigerians, responded to his rule.

Although it was a tough time, Nigerians united in love, undaunted in the face of oppression. We fought with our might and we won in the end. As my sisters and brothers in Northern Nigeria would say “Seriki goma; zamani goma,” which means “Ten kings; ten seasons.” There is no everlasting king. The world is not as straight as the rod of a gun.

Abacha was very powerful. His words became law, and existing laws were set aside when he spoke. His men were linked to the disappearances of activists. Many writers and musicians were paid to praise this leader. Others, who could not remain silent, went into self-exile.

Meanwhile, women and men in Nigeria were taking action. We were emulating those who fought and won against oppressive regimes in various parts of the world. We were taking steps that would change humanity forever.

The reign of the fearful one laid the solid foundation of social work in Nigeria. The civil society organizations that we created are still strong today. This era brought about the resistance of young minds and elderly people alike—all who said “enough!” It was the birth of a movement of women and men who refused to remain silent.

We, the Nigerian people, began to educate, agitate and organize. There were midnight meetings and terrifying moments. But no matter how slow to react, weak, shaky, or low the sound of our voices, we never stopped speaking.

Nigerians are used to election promises that will never see the light of day, and many of Mr. Trump’s hateful speeches will also never see the light of the day. But in a time of oppression, we must remember what Wole Soyinka said, “The man dies in all who keep silent in the face of tyranny.” Never again shall Nigerians remain silent in the face of a leader who disrespects anyone in Nigeria.

American sisters and brothers, come together to make a resounding impact in the lives of your voiceless ones. There is a local Nigerian adage that says, “The water that is meant for you will not flow into a gutter.” Nobody can steal your jobs. What is yours will be yours.

Nobody is a lesser being. This was why your activists of the golden Civil Rights period stood up and sacrificed their lives on that altar of humanity.

It is a new morning in America and a wake-up call for the whole world. It is a call for all of us to work together and unite against the actions that will bring the US back to the early days of humanity.

This is not a call to fear. No, the world has known enough fear of danger and death. This is a call to kindness; a call to renewal of faith in humanity; a call to serve the defenseless; a call for a just and egalitarian America.

America, the world stands with you in love as you look to stand in kindness once again. Only in your love and togetherness can you make America great again.

Olutosin Oladosu Adebowale is a contributor from Nigeria. This piece was originally published on World Pulse. Sign up to get international stories of women leading social change delivered to your inbox every month here. 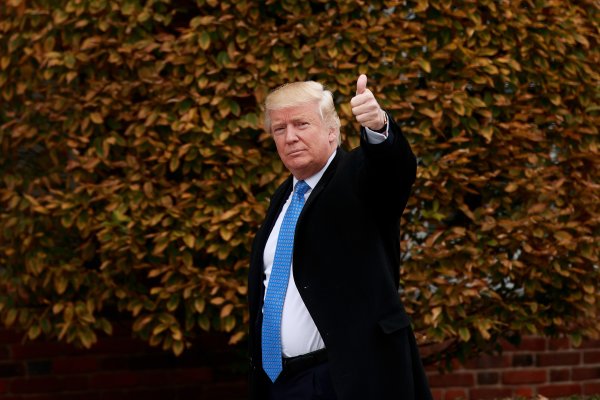 Donald Trump Had the Trumpiest Phone Call With Pakistan’s Prime Minister
Next Up: Editor's Pick