I Fell in Love Across Afghanistan's Battle Lines

I come from the Hazara people in Afghanistan.

When I was 3-years-old, my family moved from Afghanistan to Iran. There, people called me “cat-eyed girl.” I used to curse my small eyes and my fate of being born Hazara. I saw around me Iranians and other Afghan ethnicities with large eyes, and I thought having small eyes was a fault. I would fidget self-consciously whenever I went outside.

When I was older, I traveled to India, where I met girls from Vietnam, Myanmar and Nepal who had the same eyes as mine. It was only after seeing the beauty in their eyes that I began to see the beauty in my own small eyes.

Gradually, I stopped fidgeting and became more self-confident in public. I began studying at an international university, where I learned about culture, art, history, and philosophy.

As my self-confidence grew, so did my ability to respect and love other people. I came to appreciate the similarities and common points among different cultures and religions. I became a different person who found everyone beautiful and easy to love. I was exposed to the poetry of Rumi: “Forget safety / Live where you fear to live / Destroy your reputation / Be notorious.”

It was here, intoxicated with Rumi’s philosophy, flying high in a state of acceptance and love for all, that I found the love of my life—a man from the Tajik ethnicity.

When we told our families about our decision to get married, I suddenly lost my wings and crashed. The first time I brought up this topic, it left my mother speechless and my father red with anger. My mother cried out of terror. My father asked me not to say it again and not to say it to anyone else because it might cost me my life and him his life.

My family only cared about one thing: I was not to marry a man of a different ethnicity—especially a Tajik man. This was their last word.

We belonged to two different religious sects and two different ethnicities with a history of two decades of hatred between us. Hazaras still bear a grudge against Tajiks for massacring Hazaras in February of 1993, during the civil war in Afghanistan. Even though more than 20 years have passed since this attack, the hatred is passed on to the next generation. Even the young Hazara people see Tajiks as unforgivable enemies. We forget that, after this attack, the Hazara force retaliated and Tajiks were also killed.

I tried to make my parents realize that in civil war, there is not any winner and both sides are the losers who have lost their countrymates. I tried to tell them that it wasn’t only Hazaras who suffered from the loss and pain, but also Tajiks and other ethnicities who lost loved ones during the missile attacks and war. I tried to make them understand that hatred is responsible for the decades of wars we are going through, and that we need to forget the hatreds of the past and start a new life. I tried to tell them how love can cure all the pains that Afghans are going through. But they knew nothing except enmity.

Feeling Lonely in Your Relationship? Here's What to Do About It

My parents banned me from meeting my love again and said that if I continued my relationship with him, I would be disowned. I stopped talking with my parents for almost a week. Some of my relatives learned about my decision and they started making fun of me or reproaching me for choosing an enemy to live with. None of this made me stop loving him.

It is not only my family that is against my relationship. When my love and I go to a restaurant, the waiters often get upset to see a Hazara girl with a Tajik boy. Sometimes they reject our orders; sometimes they bring our food late. This has only made us more determined not to give up.

After almost six years together, we still love each other. People in our area are now used to seeing us together laughing, talking, and happy. By living with each other, we are demonstrating how love can cure old wounds.

We still don’t have the full consent of our families and some relatives, but we have inspired our young friends—and even some older people who know us. They are impressed with our bravery and long-lasting love.

Every time we go out with each other hand in hand, wearing our smiles, we show everyone what is possible when you take a step away from hatred and toward love.

Serendipity is a contributor from Afghanistan. She did not use her real name due to safety concerns. This piece was originally published on World Pulse. Sign up to get international stories of women leading social change delivered to your inbox every month here. 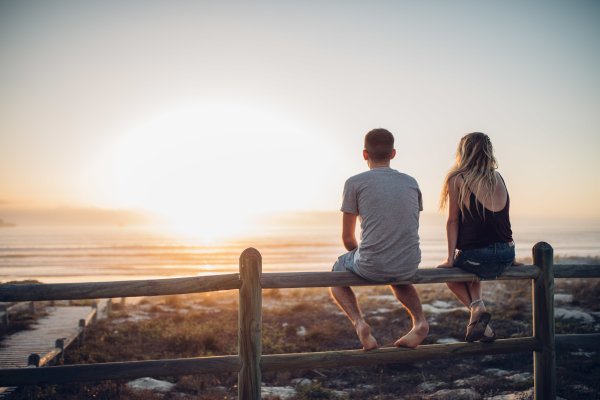 Feeling Lonely in Your Relationship? Here's What to Do About It
EDIT POST