Navdy
Navdy
By John Patrick Pullen
Each product we feature has been independently selected and reviewed by our editorial team. If you make a purchase using the links included, we may earn commission.

Certain childhood cautionary tales stick with us all our lives. Like the time my neighbor crashed into a telephone pole while fiddling with the radio. Since then, in-car tech has done little to help keep our eyes on the road, where they belong. In fact, with the advent of smartphones and GPS systems, it’s easy to say things have gotten worse.

Navdy, a new smartphone-connected, dashboard-mounted heads up display (HUD), proposes to keep people from being distracted by their tech with, well, more tech. It’s designed to sit on a car’s dashboard between the steering wheel and the windshield, projecting crisp maps, phone alerts, and additional information directly into the driver’s line of sight. Navdy plugs into a vehicle’s diagnostics port, which powers the unit while providing speed and engine information. Connecting to Android and iPhone devices via an app, the device is also able to display driving directions culled from Google Maps. And when smartphone alerts like text messages arrive, they slide into the field of view briefly, allowing drivers to interact with or ignore them. There’s also a steering wheel-mounted dial, an intuitive way to interact with the HUD’s non-touch screen. Update: A mid-March software update brought voice control features and other tweaks and improvements.

The idea behind Navdy is that simply glancing down at the teleprompter-like display is much safer than turning your head to look at your car’s dashboard or center console. This is a debatable point. Distracted driving activists say that the safest way to drive is without any tech at all. Meanwhile, research like a recent study out of the University of Toronto says that information projected onto our windshield is problematic because drivers have to focus on two things at once: the display and the road.

Behind the wheel (and in front of a Navdy), it’s hard to disagree. I tested the device in a 2007 Jeep Wrangler — a vehicle poorly suited for Navdy, the company points out — and came away wholly impressed. Because Jeeps have a looser suspension than most cars, their frames absorb every bump in the road. And despite the regular vibration in my ride, Navdy’s projected display was crisp, bright, and always within eyeshot. I took speed bumps hard and corners tight, but the display didn’t budge from my dashboard, the mount’s suction holding firm.

Driving with Navdy took some getting used to, but it was second nature after a day. The display can be set to either give a heads-up display of maps, or echo the car’s instrument panel, showing the speedometer and tachometer. Switching between the two views took just a tap and turn of the dial. After a couple hours of driving, I realized that I had stopped looking at my Jeep’s dashboard entirely. Suddenly the stock instrument panel felt like it was an unsafe distance from the road.

Interacting with Navdy was different than I had expected. The company has touted the device as having a futuristic touch-free interface, letting users accept or decline calls with the wave of a finger. While a front-facing sensor allowed for this, I barely used it — I found myself relying on the dial instead.

Surprisingly, Navdy doesn’t have a built-in microphone or speaker. It will connect to your car’s Bluetooth system, if it has one. If it doesn’t, the company recommends connecting the Navdy app to an aftermarket Bluetooth speaker or to simply use your smartphone’s speaker. For a $799 gadget, this feels like a cheap corner to cut. Frustratingly, Navdy’s original promotional video certainly implies the device would have a microphone and speaker. This gets to a fundamental problem with crowdfunded products: You might not get exactly what you ordered, if you get it at all. I’ve called out pre-order products’ propensity to become vaporware in the past, even mentioning Navdy for not delivering its product on time. But now that it has arrived, I have to concede it’s better than I expected.

For better or worse, Navdy’s success is thanks to the interface dial that the company added to the product during its development. While dials are certainly nothing new, this one markedly improves Navdy’s usability. Waving a finger back and forth in front of the sensor felt like a stressful driving distraction, but twisting the dial and pressing the center button came naturally. Still, the dial also increased the Navdy’s total cost, explaining why it’s now priced higher than its originally proposed $499. Preorder customers — those who didn’t request refunds during the product’s development delays — get a nice deal, having paid just $299 for this gear.

But how much is Navdy really worth? The $799 price includes delivery and installation, a white glove treatment that less tech-savvy users may appreciate. Still, you have to wonder if luddites are going to buy a HUD, anyway. The market for this product is largely people who know what an OBD port is, and they don’t need someone doing an install for them. Meanwhile, for the same price, you could install a Android Auto or CarPlay-compatible touchscreen car stereo, which, while it wouldn’t project your car’s speed up onto the glass, it would play your music and take your calls without having to snake cords around your car.

However many Navdy units sell, this is only the beginning for the company, which received $6 million in preorders, followed by more than $20 million in investment capital, all before even shipping out one product. Moving forward, the company hopes to partner with other firms, including automakers. So if you’re not interested in equipping your 10-year-old clunker with one of these units, just wait, because it may come embedded in your next ride. And that’s something to look forward to. 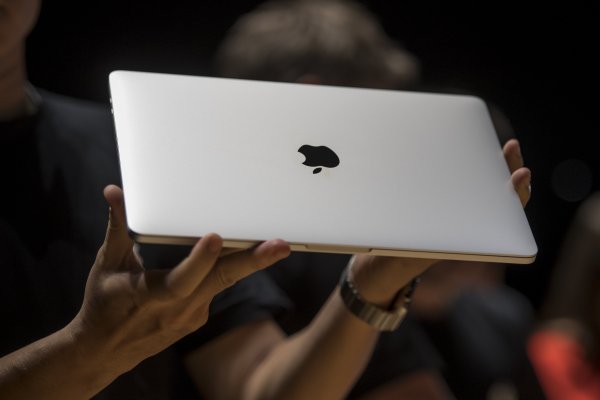 Which Apple Laptop Should You Buy?
Next Up: Editor's Pick